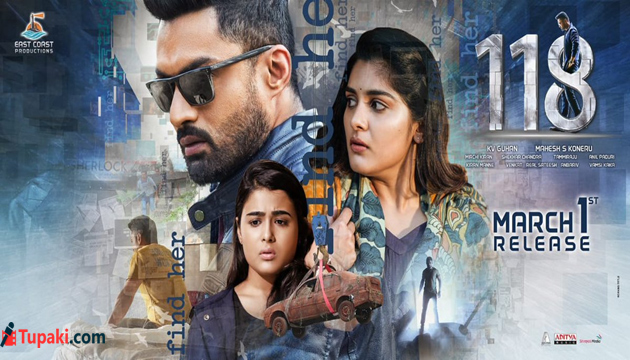 Nandamuri Kalyan Ram used to attempt only Mass Entertainers until few years ago. He, however, began trying subjects in other genres in the recent past. '118' is the film which is carrying positive buzz since the release of first look teaser. Promotional Material raised the expectations on this Thriller. Let's see what it is all about...

Gautham (Kalyan Ram) is an Investigative Journalist of a TV Channel. He is the one who goes to any extent to find answers for every question faced by him. Gautham had a weird dream when he stays in a resort. In that dream, Few People kill a Lady (Nivetha Thomas). When he goes to the same resort after few months, Gautham happens to get the same dream and that drives him go in search of the truth. Who is the lady in Gautham's dream & what happened to her forms rest of the tale..!

New Look & Performance of Kalyan Ram are impressive. Neither did he go overboard nor showed any unwanted heroism in any of the scenes. He did what was necessary according to the script and carried the whole film on his shoulders.

Yet again, Nivetha Thomas proved how good an actress she is with '118'. She leaves a strong impact with her emotional performance.

Shalini Pandey plays the love interest of Kalyan Ram. She did perform well in the limited scope offered to her.

Prabhas Seenu, Rajiv Kanakala and Hariteja has done justice to their roles. Nasser as a doctor researching on dreams doesn't leave any impact. Nothing much to say about the Main Antagonist.

'118' is technically sound. Sekhar Chandra has done complete justice to the thriller with his music. The only song in the movie is pretty good. Background Score is worth praising. As expected, Camera Work by KV Guham is top class and it's one of the major attractions. Production Values are as per the requirement of the subject. KV Guhan choose a new concept and tried to present it as interestingly as possible. Even the Screenplay looked fine. Lack of thrilling moments which blow the minds of viewers is a drawback. He should have tried something differently when it comes to flashback. Overall, KV Guhan leaves a mark of his own.

For any Thriller, The Narration should keep the viewers on the edge of their seats. '118' succeeds in doing so for most of the duration. Cinematographer KV Guhan decided to go in the less travelled path for his directorial debut. He tried to offer a new experience to the audience by presenting a new concept. '118' is based on the concept of Lucid Dreaming. Protagonist gets to know about the injustice happened to a Lady in the form of a dream. Scientific reasoning has been offered to make viewers believe such things could happen for real. Audience won't be able to guess how the mystery unfolds but the film doesn't offer a mind-blowing feeling either.

Lack of any deviation from the core concept is the biggest strength of '118'. There isn't a single unnecessary sequence in the movie. Even the romantic sequence with Heroine & lighter vein moment with the Comedian is related to the story. No attempts have been made for incorporating any commercial ingredients to appease any section of people. Every single scene is connected to the story and that's the best part. Credit goes to KV Guhan for presenting the concept he believed with utmost sincerity.

Audience get involved and travel with the Protagonist from the first 15 minutes itself. First Half of '118' is racy and the suspense element raises curiosity on Second Half. Routine Flashback Episode is the bigger drawback of this Thriller. If not for the emotional performance of Nivetha Thomas, Viewers wouldn’t have been able to find the flashback passable. This episode ruined the positive impact created until then.

Lucid Dreaming Concept discussed in the Climax hasn't left much impact. The seriousness has gone missing with the silly characterisation offered for Nasser's Role. Mind-Blowing Twist one expect from a Thriller in the climax is missing in '118'. Overall, '118' is a Thriller with new concept and few thrills here & there.