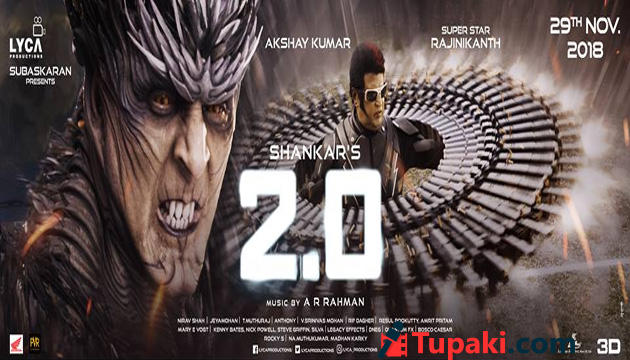 '2.O' released Today in record number of screens Worldwide. Visual Effects in the sci-fi thriller had overshadowed the craze for Rajinikanth-Shankar combo. Expectations were humongous because of the 3D format & unbelievable budget. Films of Shankar has done much better in Telugu though he worked only with Tamil Stars till date. That is why '2.O' managed to get much bigger release in the Telugu States. What does India's Costliest Flick offers?

Cell Phones get disappearing all of a sudden in Chennai City. Government will be clueless about what's happening. Meanwhile, A Mobile Showroom Owner, Company CEO and Ministers get killed by a mystery force. Government seeks the help of Scientist Vaseegaran (Rajinikanth) to handle the situation. With the help of his Assistant-Humanoid Robot Vennela (Amy Jackson), Vaseegaran offers a new life to dismantled Chitti (Rajinikanth) to find a solution. Has Chitti accomplished the mission successfully?

Roles played by Rajinikanth are more like an extension of what he has done in 'Robo'. Hats off to the Superstar for working so hard at the age of 65-plus! More than Vaseegaran, Rajini mesmerizes as Chitti in the two roles. It's never easy to deliver the required performance visualizing what's in front of you. Still, Thalaivar did a great job & you can't imagine anybody else in the role of Chitti. He mesmerizes with his energy and ease. Especially, He is simple superb as Mini Robo from pre-climax.

Akshay Kumar as Crow Man deserves a special mention. So much effort was put in by the Bollywood Star to make the role look so effective. Too much usage of prosthetics might have covered the expressions of Akshay but that's acceptable because of the scary characterization. Bollywood Khiladi delivered his best performance as aged man in the flashback. He deserves a pat on his back for accepting such a role.

Amy Jackson plays Humanoid Robot to perfection. There is no scope for skin show as she isn't a human. That's a disappointment for those who expected her to look glamorous.

Negative Role played by Sudhanshu Pandey was ineffective. None of the other Actors leave a lasting impression.

Yet again, Shankar showed why he known as a best technician in the Indian Film Industry. High-Technical Standards we were used to watching in Hollywood has been beautifully presented on the Indian Screen with '2.O'. Shankar choose a novel storyline - Threat to the mankind with the drastic decline in the count of birds. However, Screenplay penned by him to convey this message wasn't very effective. The concept of Crow-Man's vengeance on humans doesn't have the thrill factor.

AR Rahman showed his expertise while providing Background Score. There is no scope for duets in '2.O'. Only Two Songs were included. While one of them is a pathos in flashback, The other one arrives during the rolling titles. Rahman repeated the Robo Theme for the main track. Resul Pookutty made the sounding even better with his contribution. Camera Work by Neeraj Shah is mind blowing. Particularly, The way Climax was picturized leaves the viewers spellbound. Composition of Action Sequences is exceptional. Editing is crisp. Production Values of LYCA are grand to say the least.

Stupendous success of 'Robo' wasn't just because of Graphics but due to a strong story and inclusion of all commercial ingredients such as romance, comedy, action & emotion in right proportions. In the case of '2.O', Focus is more on the visual effects and other elements take a back seat. Yes, The sequel is a visual spectacle & there is no doubt what-so-ever. At the same time, Audience feel the lack of emotional connect. Indians doesn't bother about emotions while watching a Hollywood 3D Movie. If its an Indian Movie starring a Superstar, Audience expect it to have all the emotions in abundance. That's the real challenge while attempting a movie like '2.O'.

Be it Robo or Baahubali, Emotional Quotient played a crucial role in their success. Unfortunately, Emotions take a backseat in '2.O' and tempo has gone missing. Just alike his previous films, Shankar conveyed a beautiful social message with the sci-fi thriller but lack of strong emotional content is a huge drawback. Story doesn't proceed further until the pre-interval sequence. Sequences of cell phones disappearance and Crow-Man's cruel behaviour seems to have been stretched. This thriller is more like a battle between 2.O & Crow-Man. Still, Attempt made by Shankar to match Hollywood Standards in terms of visual effects is appreciable.

Audience except '2.O' to be much better than 'Robo'. In 'Robo', Love Track between Vaseekaran & Sana offered ample scope for romance, glamour, comedy and songs. Shankar can't include them in the sequel as Amy Jackson plays a Robot here. Will the movie buffs keep that logic in mind while watching '2.O'?

Technically, '2.O' is at least 10 times ahead of the first part. Visual Effects in the initial sequences doesn't look great. The really fun begins when Chitti & Crow-Man clashes for the first time. Climax is more like a visual spectacle and its worth the money paid for the ticket. When it comes to blending the emotions with technology, This Sci-Fi Flick is more like a half-baked meal. Yet, '2.O' willn't disappoint those who want it to be an upgrade of technology used for 'Robo'. Overall, Team '2.O' deserves all the praise for the sincere efforts to raise the standards of Indian Cinema.