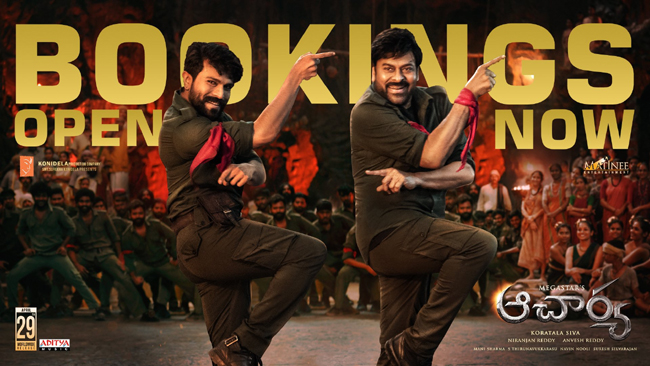 Megastar Chiranjeevi is arriving on the big screens after a gap of three years. He teamed up with successful writer-director Koratala Siva for a social drama named 'Acharya'. This film is special since it has Ram Charan playing a special role. This is the first time we will be seeing father and son duo working together on a complete film rather than giving cameos. Music by Mani Sharma has already become popular and the trailer raised the expectations on the movie. Superstar Mahesh is giving the voiceover for this high-budget film which has rich technical backing and talented supporting cast. The film has been released amidst huge expectations and let us see how the film turned out...

The Adivaasi's of Paadaghattam village are the protectors of Dharmasthali village from a long time. He are a crucial part of every ritual and celebration in Dharmasthali temple. With the temple getting fame and attracting tourists, Basava (Sonu Sood) eyes on grabbing the revenue of the temple. He slowly pushes the people of Paadaghattam away from Dharmasthali and keeps the temple in his grip. His atrocities grow bigger with each passing day and the people pray for a savior. It is when Acharya (Chiranjeevi) enters the village as a carpenter and starts going against Basava and his gang. Later, people find out Acharya's goal and the reason behind entering their village. What is that mission? Was 'Acharya' successful in achieving it? You need to go to the theatre to find out about the rest.

There is a scene in 'Acharya' where Chiranjeevi and Charan enter an illegal mining area as security guards. When a bad guy asks why there were late and questions if they are still in a hangover, Chiru stabs him with a knife. When Charan asks him why, the senior replies that he got hurt when the bad buy questioned if he was drunk. Later, Charan stabs another guy as he gets pushed by a rowdy. Immediately, Chiru kills another guy for looking at him seriously. Both father and son start killing the baddies by giving such silly reasons.

Scenes like these usually are a mass feast to the viewers but it is not the case with 'Acharya' as people cannot understand how to react to this. The film brings the energy of the audience completely down by then that they are in no mood to enjoy such scenes anymore. Big star hero films usually don't have relatable situations or characters. Most of them are larger than life in nature and appear far from reality. But there will be a defining emotion in the movie which keeps the viewers connected to the proceedings no matter how over the top it appears. 'KGF' franchise is a big example of this. Despite all the unrealistic scenes, the emotion of mother-son bonding is what makes to root for the hero against all odds.

But it did not happen at any stage of 'Acharya'. The film is about a saviour who arrives in a village which needs protection from a devilish person. This storyline is used in hundreds of films. Boyapati's films have the same story all the time and Kortala picked the same story for 'Acharya'. But he created a separate world like 'Dharmasthali' and added a backdrop of Naxalism to the hero character. They bring grandeur to the film but not novelty and freshness. This is the biggest minus in 'Acharya'.

The set of 'Dharmasthali' which cost crores of rupees looked wonderful but not natural. The proceedings in the village are very routine, to say the least. After a common start, people expect the movie to get a boost with the hero's introduction but it did not happen. There is no room for emotional scenes with one fight popping up after another. There are no turns in the story and no challenges were faced by the hero who beats up every baddie who tries to stop him. Chiranjeevi is known for his emotional acting and expressions but Koratala did not try to make use of it. People like Megastar for his energy but he looked very dull in the movie. Koratala who prefers subtle acting like what Mahesh and NTR did in his movies before tried to get the same for Megastar too which backfired.

With a weak story and weaker hero characterization, using Chiru's energy would have helped but he appeared very inactive throughout the movie barring a few scenes. The first half of 'Acharya' severely disappoints on all fronts. People pin a lot of hopes on Chiru and Charan scenes in the second half along with Siddha's character. But Siddha's character too lacks any kind of energy and his love story with Neelambari bores you to the core. Siddha's character had nothing special as long as he stays in Dharmasthali. Also, a friend who always stays beside the hero backstabbing him is a pattern which was repeated so many times in our movies.

The only enjoyable moments for Mega fans were when Charan joins Chiranjeevi and fighting together in the flashback. Though it had nothing new, some scenes, fights and 'Bhale Bhale Banjara' song of father and son dancing together brings some enthusiasm. The ending of Siddha's character and the climax portions are routine once again. Everything in this film appears outdated. With Chiru looking passive all the time, he wasn't able to save this sinking ship. Even an in form Charan too couldn't lift it when made 'Acharya' a disappointing venture.

This is the dullest Chiranjeevi has ever looked on screen. Though he looked quite young even at the age of 66, the character itself lacked energy and his attempt at subtle acting came out looking quite dull on screen. Barring his graceful dance movies, there is nothing for the fans to get excited about. Siddha's character is a bit better than Acharya's but even it fizzles out quickly. Charan was decent and the combination scenes came out very well. Pooja hedge is completely wasted in this film and her parts were quite boring which was not her fault at all. She looked very beautiful in the traditional look. Sonu Sood's character is poorly written and we have seen in many times before. Gishusen Gupta was ok and he did a role that Jagapthi Babu usually does these days. Tanikella Bharani was good in the time he was given on screen. Ajay did a fine job. The rest of the cast were okay.

Mani Sharma could not make the best use of the golden opportunity he was given after a long time. It is shocking to see such a senior and seasoned composer coming up with such pale work. His scores during the elevation scenes did not work at all. His songs were decent but they could have been a lot better. There is no flaw in Thirru's camerawork and the visuals look fantastic. The production values are great and the makers spent more than needed. The sets were great but lacked naturality.

Writing is the biggest strength of Koratala Siva but he faltered in the story level itself for 'Acharya'. He disappointed big time and there are faults in the storyline and the routine screenplay did not help at all. The film never looked like it was going to get better which explains a lot.

Acharya - A Big Lesson For Everyone