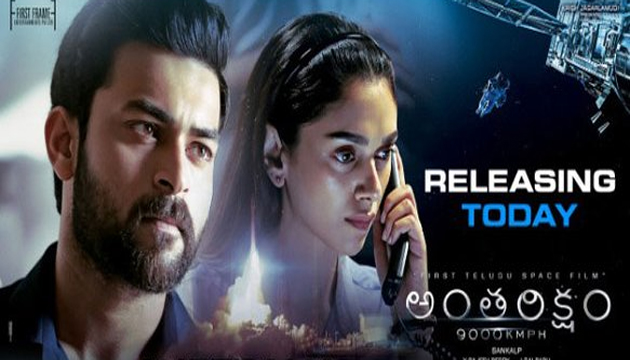 Sankalp Reddy made his directorial debut with 'Ghazi'. This Supremely Talented Filmmaker preferred to make yet another path-breaking film & that's how 'Antariksham' materialized. Varun Tej yet again made everyone realize that he won't mind travelling in a less-travelled path by taking up this project. With films like 'Kanche' and 'Gauthamiputra Satakarni', Krish Jagarlamudi established himself as a good producer. The trio has come together for 'Antariksham' only to offer an unbelievable experience to the Telugu People.

Dev (Varun Tej) is a Scientist in the Indian Space Centre. He was instrumental in sending a satellite named Vipriyaan into the Moon but the mission fails. At the same time, Dev's Lover Paru (Lavanya Tripati) dies in a freak accident. Post this shocking setbacks, Dev quits his job and leads the life of a Teacher in a rural village. 5 Years Later, Dev was approached by Space Centre for fixing a technical glitch. What has Dev done for the Nation forms rest of the tale!

Varun Tej deserves all the praise for the kind of subjects he has been choosing. He is aptly cast in the role of Dev. Depending on the requirement of the scene, Mega Hero delivered settled/intense performance.

Aditi Rao Hydari showed a lot of maturity while essaying the role of an Astronaut. Though Lavanya Tripati have a limited screen time, She did make her presence felt with her beauty & lovable expressions. Srinivas Avasarala and Satya Dev left a mark of their own. Rahman and Raja did a fine job. As it's a CG-based flick, Actors has to imagine what's in front of them and act accordingly. All of them have given their best output for the space flick.

A film like 'Antariksham' can't be made if highly-skilled Technicians doesn't work in tandem. Entire Crew has done a fabulous job inspite of the budget constraints. Music composed by Prashanth Vihari is worth a special mention. While the Two Songs have been composed well, Background Score is marvelous. Cinematography Gnansekhar made good use of his experience to create a great output. Visual Effects in few scenes were exceptional. Production Values are fine. Credit should be given to Producers for taking up such an unconventional flick inspite of being aware of its limited appeal.

Director Sankalp Reddy deserves all the praise for offering a new experience to the Telugus once again. At any moment, He didn't deviate from the actual plot for the sake of commercial elements. Sankalp explained Rocket Science in a manner anybody could understand easily. He, however, wasn't successful in coming up with a gripping/racy screenplay and even took too much cinematic liberty.

Sankalp Reddy drew Nationwide attention with 'Ghazi' which is India's First Submarine Film. Later, He took up the challenge of making Tollywood's First Space Film to take the Telugu People to the space. So much detailing has been done during the scripting stage is evident. Viewers will appreciate the efforts put in by the whole team to make such a landmark movie. Concept chosen by Sankalp Reddy is quite impressive but the impact could have been better had if the screenplay is gripping. Lack of strong emotional quotient is a drawback. Feats done by the Team of Astronauts aren't convincing at times.

For the first time ever, This genre has been explored in the Telugu Cinema and that's the biggest advantage for 'Antariksham'. It's going to be a new experience for all those who weren't used to watching Hollywood space films. The kind of emotional connect & high points required to arrest the attention till the very end were missing.

Protagonist quits his job soon after the failure of his dream project. After 5 years, He makes a comeback to show his heroism & that looks unconvincing. Will a Scientist gives up his career after a failure or Would he/she try to correct the mistakes to accomplish the mission successfully? Director should have preferred a much stronger reason to justify the exit from the job.

Moments featuring the Astronauts in the space bring a lot of excitement among the viewers, but this is where logic goes for a toss because of cinematic liberties. Anything could be done in a commercial film. In the case of films such as 'Antariksham', Makers can't deviate from the facts and it's like a text book for generations. Why because Telugu People would  take this movie as a reference while discussing about space, astronauts and satellites.

Overall, 'Antariksham' is a praise-worthy attempt. It will be an enriching experience for all those who hadn't seen space films made in the Hollywood so far.