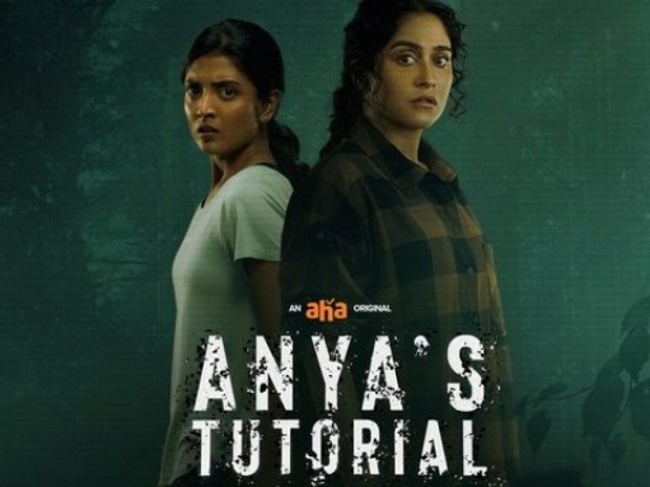 In its list of original content, top Telugu OTT platform Aha adds another interesting web series named 'Anya's Tutorial'. Featuring Nivedithaa Satish and Regina Cassandra in the lead roles, Pallavi Gangireddy directed it. This series created a good buzz with its spooky trailer and let us see how this web series turned out.

Lavanya (Nivedithaa Satish) and her elder sister Madhu (Regina) go through a very troubled childhood. After completing her education, Lavanya decides to move away from her family and rents an apartment. She lives alone there but it is when the lockdown period starts. With nowhere to go, Lavanya starts posting videos through her Instagram handle with Anya's Tutorial as its name. She comes up with content where she tries to make people believe that there are spooky and haunting elements in her house. This catches the attention of a lot of people but Lavanya starts experiencing abnormal activities in her house for real. Intriguingly, all these aspects are linked with her elder sister Madhu. What does Madhu have to do in this whole scenario? Will Lavanya survive at the end? These questions will be answered in the psychological thriller.

The Telugu audience are exposed to a lot of different genres but psychological thrillers are very rarely made here. People usually enjoy this genre through dubbed versions of Malayalam or Tamil movies or series. Content in this genre needs a lot of skillful narration in order to keep the audience invested. The makers of 'Anya's Tutorial' needs to be commended for making an effort to come up with a psychological thriller in Telugu. But the seven-episode series leaves you a lot to be desired.

The series starts off on a confusing note and director Pallavi Gangireddy used the first three episodes to completely establish the plotline. The screenplay became too slow during this time and there were a lot of scenes that felt repetitive. There are not enough spooky moments during this portion that sends shivers down your spine. All this time, the viewer wonders about the intentions of both sisters. Despite all its shortcomings, the initial episodes sustain to hold the interest of the audience.

The show takes a gritty turn and it is when Regina's character gains significance. Things start getting interesting and there were some scenes which were picturized brilliantly. Anya getting possessed by evil spirit is presented quite well and the writing is good in some parts too. Anya's childhood and her issues with Regina's character are quite convincingly showcased. The show is set around modern technology but logic goes for a toss quite often. There is a lot of crime that keeps happening and the cops are not called for a long time which lacks any explanation. Also, there are a few scenes in which the performance of lead actors appears too forced and artificial which spoil the viewing experience.

In every psychological thriller, there is a strong flashback episode that explains why a person or a character behaves in a certain manner. But 'Anya's Tutorial' falls short in this aspect as a lot of detailing which is required for narration goes missing. A lot of threads in the story have been left untied in this series which works against it.

While the good technical output and decent writing at parts, may keep you engaged in the show, there are a lot of loopholes that will dampen the flow. Also, the team gave a twist in the end hinting at a possible second season and we need to see if it really happens or not. A tighter narration, attention to detail and some more spooky moments may have worked wonders for this series but it did not happen.

The show is publicized with Regina's face on the promotional content but it is Nivedhitaa Satish who steals the show. The entire story is written around her and she definitely hogged the limelight. She is very convincing as Anya and showcased different emotions quite convincingly. She is certainly one of the biggest assets of this series.

Regina's character is not well-etched and her performance too appeared forceful at times. But she makes her experience count during the last episodes. People who expect Regina to be the front and center of the show might get disappointed. There are a lot of fresh faces in this series and all of them did a decent job.

The camerawork is very good in this film. The usage of darkness sets the mood perfectly. A lot of scenes were made more dramatic than they are due to the visuals and the cinematographer needs a special appreciation. There are a lot of VFX used in this series and they are well executed. The production values are quite good and so is the editing. The GBM is strictly okay.

The main problem with the series is its writing which leaves a lot to be desired and director Pallavi Gangireddy did her best to extract good output from her entire team. But there is something missing in this series that stopped it from being an edge-of-the-seat thriller and a lot of horror elements.