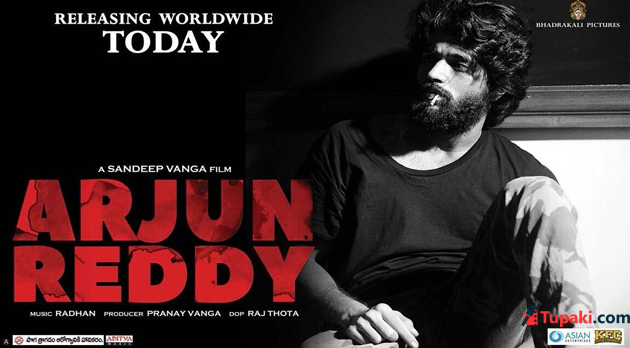 'Arjun Reddy' is one film which generated tremendous pre-release buzz despite no Star Cast. Vijay Devarakonda of 'Pelli Choopulu' fame is the only popular personality associated with this project. Still, Youth went crazy about the movie after the launch of Posters & Promos. Tall claims and Attitude of Vijay had struck a right chord with the Younger Generation.

Arjun Reddy (Vijay Devarakonda), a Medical Student who is short-tempered, falls in love with his Junior Preeti (Shalini). Even Preeti gets smitten by Arjun Reddy after a while & they maintain a close bond for years. An unavoidable situation leads to their break-up. How did Arjun Reddy handle this phase of his life forms rest of the tale.

Vijay Devarakonda has given an award-worthy performance. Audience could only seen Arjun Reddy on the screen. Kudos to the way he owned the character and lived the life of Arjun Reddy throughout the course of the movie. The emotional outburst during the inquiry regarding the cases booked against him in the sequence which gonna standout.

Shalini got a role which restricts her from being expressive & even the dialogues are less in number. Overall, She has done an appreciable job.

Rahul Ramakrishna played the crucial role of Hero's Friend. Just alike Priyadarsi in 'Pelli Choopulu', He left a strong impact with his Telangana slang and natural performance. Kamal Kamaraju and Sanjay Swaroop have been good in the roles of Hero's Brother & Father. Priyadarsi leave an impact despite playing a small role. Yesteryear Actress Kanchana who made a re-entry after long gap showed her speciality.

Just alike the Cast, Technicians had contributed what was required from them for a subject like 'Arjun Reddy'. Music by Radaan of 'Andala Rakshasi' fame showcased a new dimension in him. Background Score is mind-blowing, especially in the sequences showing the gradual downfall of the Protagonist. Raju Thota created a certain mood with his Camera Work and presented the film richly inspite of budget constraints. Dialogues 'Arjun Reddy' are situational and very natural. Production Values are fine. Director Sundeep Reddy choose an out-of-the box subject and tried to present everything in a fresh manner. But, His Narration Style mayn't appeal to everyone. Better Editing could have helped 'Arjun Reddy' reach out to more number of people.

Only Few Films leave an ever lasting impact & 'Arjun Reddy' is one such rare movie. It doesn't mean that there are no flaws at all but certainly falls in the category of path-breaking films. Whoever connects with the concept will be in a trance till the very end. Those who couldn't connect might find it unbearable.

Audience will be surprised to see over a dozen lip-locks though they step into the theaters knowing it's an Adult Flick. Every single dialogue and scene looks refreshing. A section of audience might go crazy watching 'Arjun Reddy'. How many people will be able to digest the sexual escapade of the Protagonist after break-up is a million dollar question.

Audience will be able to know what kind of a movie 'Arjun Reddy' is like and whether they gonna enjoy it or not within the first few minutes itself. Once if we could connect with the Protagonist & Narrative Style, The sailing will be smooth till the very end. Good intensity is being maintained in each and every sequence.

Love Story could have been dealt in a much better way. Director failed to establish why Heroine falls in love with Hero. Heroine would hardly respond even though Hero kisses her within few hours after their first meeting. Director tried to use the physical intimacy to present the love between Lead Pair. So, Viewers get the doubt whether it's love or lust. There is a bit of lag in the Second Half & at least over 15 minutes should have been trimmed. However, Director succeeded in ensuring Audience connect to the subject emotionally. Except for the cinematic Climax, 'Arjun Reddy' is unlike any of the Telugu films made so far. Overall, This is a movie which gonna be embraced by the Urban Youth.