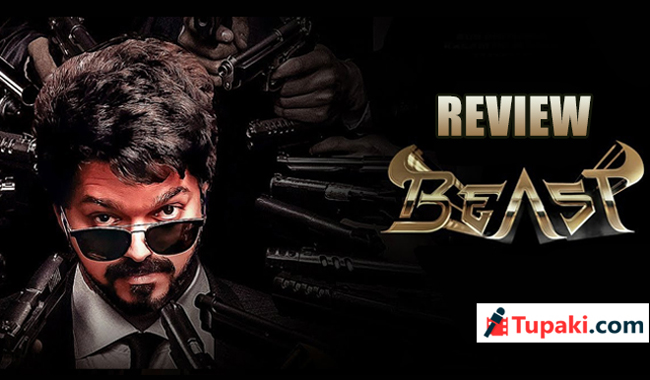 Thalapathy Vijay who has been scoring back-to-back hits lately and secured a decent market in the Telugu states has arrived with 'Beast' now. Written and directed by Nelson Dilipkumar who made movies like 'Coco Kokila' and 'Varun Doctor', this film generated a huge buzz thanks to the super hit songs by top music composer Anirudh. Pooja Hegde is the heroine in this flick. The trailer raised the expectations with its slick action sequences and an interesting premise. This movie came out on Wednesday as 'KGF – 2' is arriving this weekend.  With an attractive cast and an intriguing storyline, let us see how the film turned out.

Veera Raghava (Vijay) is a RAW agent who put his life on the line multiple times for his country. During one of his missions, he catches a terrorist named Umar Farook but a small girl gets killed in the process. Heartbroken by this, Veera leaves his job and guilt takes over his mind. He joins a security company and goes to a big mall in Chennai for securing a job contract for his company. A bunch of terrorists hijacks the mall. What does Veera Raghava do at this point and how he battles with terrorists and saves the people forms the rest of the story.

Nandamuri Balakrishna did a movie named 'Vijayendra Varma' back in 2004. In that film, he puts on a parachute and flies from India and lands in Pakistan. This is frankly one of the most illogical scenes in Indian cinema and there is no hiding this fact. A lot of people trolled it quite badly at that time including the Tamil audience. It was a time when Kollywood made game-changing cinemas while we were stuck in the routine masala films which catered to the star hero's image and their fans. After 18 years, the tables have turned drastically as the Telugu audience are making huge films that cater to the pan-Indian audience whilst young filmmakers are coming up with fresh concepts. Tamil star hero films on the other hand have started dishing out routine masala elements all the time. Their films are not having anything new to offer and they are banking on their star heroes to pull off a miracle every time. Most of Ajith and Vijay's films are filled with hero elevation shots and loud background scores with an age-old story.

'Beast' is the latest example of how far Kollywood filmmakers are going to satisfy the star hero fans and suspend logic as well as the story. There is a shot in the trailer where Vijay launches missiles from a fighter jet that he is riding without a helmet. This made many question the lack of authenticity and attention to detail. Director Nelson wanted to showcase Vijay in a superhero manner as Vijay rushes into the Pakistan airspace and kills the terrorists with missiles. He catches his target and returns in the same jet which appears outright silly. This is the climax action scene in the film by the way!

Director and writer Nelson Dilipkumar showcased his brilliance to everyone with 'Kolammavu Kokila' and 'Doctor'. Despite having some logic-less scenes in those films too which run on a serious note, Nelson's subtle sense of humor worked wonders in them. Such a talented filmmaker making a film like 'Beast' shows how the star image of heroes forces the directors to change even unintentionally.The biggest hurdle for Nelson in this film turned out to be Thalapathy Vijay's image. Thanks to the surge in OTT market, people are getting exposed to a lot of hostage thrillers from all over the globe. After watching such gripping thrillers, the audience will surely expect some intensity from 'Beast'. But Nelson turned the terrorists into idiots and made every character look silly just to elevate the heroism. The concept of a big mall in the heart of Chennai getting hijacked needs to be shown in a very convincing manner. But all the characters in the film move all over the place with ease and there is no menace in even one of the terrorists. On the other hand, the hero beats every villain out there without breaking a sweat. How can you expect seriousness in a project with all these happening in front of your eyes?

The film started quite well and we get a feeling that we are about to witness something fresh and compelling. The emotion behind the hero leaving RAW connects to every person. There are a few Nelson mark funny episodes that set the stage perfectly for a fun ride. Hero's episodes with heroine appear silly but the audience hope that it would get serious soon. Hero kills off some terrorists with ease but the audience hope for something bigger coming. The audience kept waiting for the entire run but nothing of that sort happened. Instead, we had Vijay doing whatever he wants. He threatens the main villain before the first half itself and the second half is filled with Vijay once again. His onscreen adventures know no bounds and we get a feeling that we are witnessing a video game. Nelson presented the heroism in an over-the-top manner. Fans of Vijay may enjoy all these but the Telugu audience may find it tough to enjoy this 'Beast' which surely scared the audience in theatres.

Vijay had a great screen presence and did well in the fights as well as song sequences. He was super stylish and did his best for 'Beast. The biggest disappointment is Pooja Hegde who was given a small role that is filled with silly scenes and dialogues. He was not even a side character in the film. Director Selva Raghavan looked convincing on the screen. The actor who did the minister's role went overboard. VTV Ganesh is the biggest comedy relief. The director failed to utilize Yogibabu to the fullest as he was just okay in the film. The rest of the actors are adequate.

Irrespective of the film, Anirudh always delivers and he did the same for 'Beast'. His songs were already big hits and his background was very pulsating and energetic. He tried his best to lift the film. Manoj Paramahamsa's cinematography is top class as the visuals looked stunning. The production values from 'Sun Pictures' are great while the Telugu dubbing is decent.

Nelson Dilipkumar who delivered fantastic products with a limited budget failed to deliver at the top level. He got trapped in projecting Vijay's image and ignored the other necessary elements. Selecting a hostage drama concept and delivering a product to please the fans did just to neither.

Beast - This 'Beast' definitely scares you!