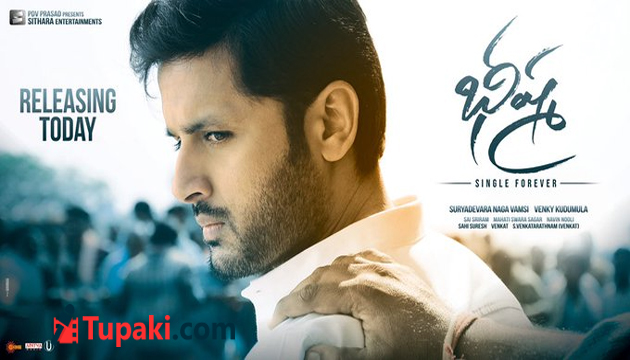 The month of February had many releases but none of them impressed the audience. Nithiin's 'Bheeshma' released today amidst good buzz. Directed by Venky Kudumula, this film is very important for Nithiin's career. Let us discuss about how the film turned out.

Bheeshma (Nithiin) is a happy-go-lucky guy. All he wants is to say goodbye to his single life. He meets Chaitra (Rashmika) one fine morning and falls for her. After a lot of effort, he impresses Chaitra.

In a sudden turn of events, he ends up becoming the CEO of the company Chaitra works for. How 'Bheeshma' rises to the occasion and handles such a big company with zero knowledge forms the rest of the story.

Some films require a lot of attention from the viewers. They keep you guessing till the end and every detail needs to be carefully observed. On the other hand, there are a few films made for pure enjoyment. Nithiin's recent release 'Bheeshma' falls under the second category. The film has nothing new to offer but you enjoy every moment of the film while watching it.

A story of an experienced businessman who hands over his entire business to a youngster who failed in graduation may look outright silly on the outset. There are many loopholes in the script and the film never tries to emotionally connect with you despite dealing with a serious issue like organic farming. But the racy screenplay and the witty dialogues make you forget all these flaws. Right from the very beginning, the film takes the hilarious route and doesn't give you time to think about the story.

Venky designed the protagonist's character in a funny way which makes you relate with him instantly. His struggles as a single guy and his meme language are quite funny. His scenes with Sampath in the first half and Vennela Kishore in the second half are the biggest assets of the movie. The first half keeps you engaged without getting much into the story. The second half also runs on the same note. Whenever there is a serious scene, the director immediately comes up with a hilarious scene to cool things down which worked in favour of the film's light-hearted nature.

On the flip side, the love story between Nithiin and Rashmika appears to be forced. The director tried to generate comedy out of their love track too. Also, the film's wafer-thin storyline is a drawback. As we discussed earlier, you shouldn't think of logic while watching this flick if you want to enjoy it.

On the whole, 'Bheeshma' is a complete package of tremendous comedy, energetic hero, beautiful heroine, light-hearted narration and colorful visuals which makes it worth watching if you ignore some minor drawbacks.

It is good to see Nithiin back in a fun-filled role. His comedy timing is top-notch as he carried the film on his shoulders. His looks were quite stylish and pulled off some energetic dance moves in 'Whattey Beauty' song. Films like these fail badly if the lead actor fails even by a small margin but Nithiin came out with flying colors.

Rashmika appears beautiful and did an okay job. She did not have much scope to perform. The lead pair's chemistry is cute.

Jissu Sengupta's role could have been etched better. Vennela Kishore is a show-stealer. He dominates everyone whenever he appears onscreen. His scenes with Nithiin leaves you in splits. Anant Nag added a lot of weight to the film with his dignified act.

Sampath good job in a silly role while Brahmaji, Naresh and Raghu Babu played their parts perfectly. The rest of the cast were apt.

The movie looks very pleasing to the eye thanks to the splendid cinematography from Sai Sriram. He did a commendable job in making 'Bheeshma' colorful and vibrant. Production values by Naga Vamsi are rich as every penny spent on the film is visible onscreen. Music by Mahati Swara Sagar is adequate. 'Singles Anthem' and 'Whattey Beauty' remain with you for some time while the rest fade away quickly. His background score during the fight sequences is very good. Artwork in fine and editing by Naveen Nooli is slick. Despite being over 150 minutes, the film runs at a decent pace.

Coming to writer and director Venky Kudumula, he successfully broke the second film jinx with 'Bheeshma'. He played to his strengths once again and wrote some hilarious episodes which surely brings the house down. He made sure that the entertainment quotient never goes down throughout the proceedings. In this process, he completely ignored the drama part as the film doesn't have any emotional point that connects with you. Also, the logic goes for a toss in the second half but the comedy overshadows all these minor flaws making 'Bheeshma' an enjoyable ride.