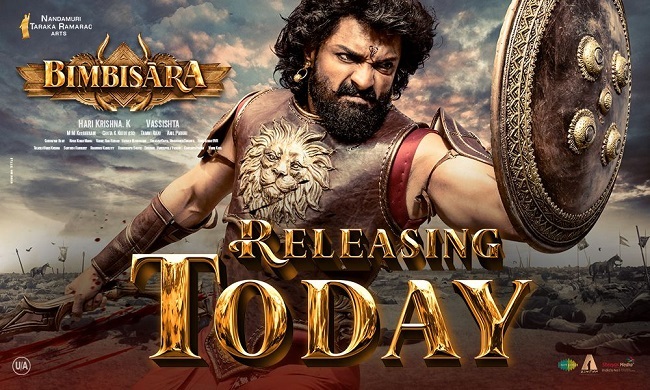 After a brief gap, Nandamuri Kalyan Ram is arriving with 'Bimbisara'. Right from the first glimpse to the trailer, the promotional content of this film generated good expectations. It is a socio-fantasy movie and there is a positive buzz on it. Catherine Tresa and Samyuktha Menon are heroines in this project while Mallidi Vashist is making his directorial debut. The film arrived with a lot of promise and let us dive into the review straight away to find how it turned out.

Bimbisara (Kalyan Ram) is a ruthless king who rules the Trigarthala kingdom. He conquers every piece of land he sees and kills every person who goes against him. He even tries to kill his own brother Devadatta who narrowly escapes. With the help of a magical mirror, Devadatta sends Bimbisara away and rules the kingdom peacefully.

On the other hand, Bimbisara steps into the current time due to the magical mirror. What type of situations does he face? Will he go back in time again? What does he do in the present time? All these questions will be answered on the big screens.

It is common for the audience to be a bit skeptical when a new director teams up with a hero who is in flops and makes a time-traveling movie. Even big directors and star heroes are afraid of handling such concepts. Despite Rajamouli instilling belief in everyone, the audience are still not hopeful that every filmmaker does justice to these kinds of films. Kalyan Ram took a huge risk by trusting a debut director like Vassistha. The film's unit succeeded in making sure that the audience are engaged for the most part of the film. They showed that the brilliance in the trailer is not just confined to it and presented the movie in an impressive manner. Without comparing it to high-budget socio-fantasy films like 'Baahubali' and 'Magadheera', it can be said that 'Bimbisara' is a very commendable effort.

The tagline of 'Bimbisara' is 'Time Travel from Bad to Good'. This is the entire story of the film. It shows a ruthless king who time travels to current time and turns into a good human being at the end. This simple storyline has been narrated very well by Vassistha.

We usually see movies that start in the present and go into flashback mode and return to the present again before the climax. Even Rajamouli did the same for 'Magadheera' and 'Baahubali'. It is a safe formula that ensures giving a high feeling to the viewers. But Vassistha started the film in a linear manner and without going for the tried and tested screenplay pattern. He introduced the 'Bimbisara' character directly to the audience and presented it in the cruelest way. Despite feeling regular at the beginning, the twists and the emotions work out well. The director does not drag at this point and brings the main character to the present time which gives a different experience to the audience.

Reminding people of 'Yamaleela', scenes like how the people treat a king in the past nowadays, how the king responds to them and other entertaining episodes are showcased. They work out decently. Despite the logic going for a toss in a few sequences, you don't mind ignoring them as it is a socio-fantasy. The interval twist excites everyone and makes them wait for the second half eagerly.

But the second half does not meet the expectations and goes in a passive way with regular scenes. The songs also dampen the flow and it is a bumpy ride till the climax. But the last 20 minutes were very executed and stand as the biggest highlight of the film. People will be curious to find out how the story ends during these scenes. Director should be commended for executing what he envisioned perfectly on the screen. But the audience usually expect surprises, thrills, emotions and huge elevations from these films. 'Bimbisara' is not such a film that offers them in abundance but makes sure that you are engaged for the major part of it.

Kalyan Ram breathed life into the 'Bimbisara' character. He owned the role and got into the skin of it in a perfect way. His look, diction and dialogue delivery are on point. It may take some time to get used to seeing him in such a role but he portrayed the negative shades very well. His efforts are clearly visible on the screens and without a doubt, it is one of his best works till date. It is a one-man show from Kalyan Ram.

Catherine Tresa makes her mark despite a limited screen time while Samyuktha fails in comparison. Her character lacks significance and her look did not impress too. Hussain is okay as the villain though a popular artist would have brought more weight to it. Prakash Raj, Aiyyappa and other artists did a decent job. Srinivas Reddy brings in a few laughs with his character while Brahmaji, Viva Harsha, Chammak Chandra and others did justice to their limited roles.

There is no better option than MM Keeravani for these kinds of films. His trademark compositions elevate the film quite well though a few tunes remind people of his famous work in 'Baahubali'. Chirantan Bhatt's songs are quite pleasing though their placement leaves a lot to be desired. Chota K Naidu did a great job in giving beautiful visuals within a limited budget. The production design and visual effects are very impressive. The dialogues are well written.

Debut director Vassistha impresses with his first film. His strength lies in the script itself and he executed it without any compromises. He wrote the screenplay in a different way and his talent is written all over the film. Had he taken more care in the second half, 'Bimbisara' would have been on another level. On the whole, he makes a strong debut in Tollywood with 'Bimbisara'.