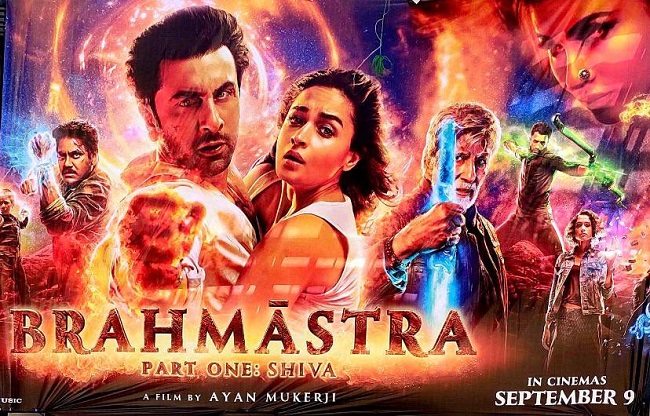 'Brahmastra' is the costliest film made in Bollywood's history and SS Rajamouli presenting it in South India made it even more appealing. Starring Ranbir Kapoor and Alia Bhatt in the lead, the movie had a pan-Indian release on 9th September. The movie arrived with massive hype and expectations. Let us see how the film turned out.

Shiva (Ranbir Kapoor) is an orphan who grows up alone. He falls in love with Isha (Alia Bhatt) instantly and she reciprocates the same feelings towards him. While they are enjoying their love life, the powers of Shiva come to light. Also, he suddenly goes into a trance at times. He sees a few killers ending the lives of few people who have powers just like him. Shiva understands that they are in the search of 'Brahmastra' which is the most powerful weapon. What is the story of 'Brahmastra'? How does Shiva protect the world from evil? Does he get any help? All these questions will be answered in the movie.

The reason behind the success of 'Baahubali' is the strong story, drama and emotions. It is a mistake to think that the grandeur and visual feast is the reason for its record-shattering result. The performances, screenplay and dramatic moments are the main reason while the visual effects were added attractions. Even though 'RRR' does not have a strong story, it was successful because of its emotional core and drama which connected with audience. They are the main pillars of SS Rajamouli. But people only look at the visual extravaganza he offers.

People who decided to high-budget films after 'Baahubali' are running after top-notch visual effects and technical brilliance but not relying on the core aspect which is a strong script. This is where they are faltering badly. 'Brahmastra' stands as an example for this theory as everything was good except the writing. There was no clarity in terms of storytelling, the scenes lacked logic and characters appear without any context. Apart from the magic created through graphics, people will remember nothing from the movie at the end. Even the VFX too tends to look regular after a certain point. 'Brahmastra' is a film that is high on graphics and low on content.

People saw what happened to 'Radhe Shyam' which was released in the summer. The Europe backdrop, heavy VFX work, huge sets and every small thing screamed grandeur. The producers spent crores on a single shot. But it offered no purpose as the weak writing completely let down the efforts of other departments. We know how 'Sita Ramam' turned out. Every frame looked like a painting and the movie remained as a timeless classic. Hundreds of crores were not spent on this film. We don't need to invest heavily every time to deliver a quality product. There is nothing to say positively about the story and screenplay of 'Brahmastra'. At no point in the two hours and forty-five minutes did the director try to engage the audience with his storytelling but focused solely on visuals instead. Everything happening on the big screen appears artificial and Ayan Mukerji fails to form an emotional bond between his character and the audience.

'Brahmastra' is based on a lot of old historic and fictional stories where a powerful weapon is being chased by everyone. The evil tries to get a hand on it in order to destroy the world while a group of people try and stop it. This is the film's story in a nutshell. A story like this needs to be set in a period timeline but it happens in the current time. Speaking about Astras, magic, evil spirits and other things sounds a bit too artificial. Also, the graphics give you an artificial feel without appearing natural. The visual splendor and the well-designed action sequences may please the masses but 'Brahmastra' tests your patience many times while watching. The director did not write the hero's character properly and the rest of the other big actors too got shabby roles. The much-hyped love story between Alia and Ranbir too fails to impress the audience. There is no emotion in this thread.

The sequences revolving the 'Brahmastra' weapon were also not that engaging but we are still curious in the first half in the hope of getting a good second half. Barring the action sequences, 'Brahmastra' falters at many places in the second half. The guru guiding Shiva towards his goal reminds people of the 'Kung Fu Panda'. The climax leaves a lot to be desired and one wonders how an experienced pro like Karan Johar bankrolled such big bucks on this poorly written story. The makers announced that there will be a second part at the end but we need to wait and see if it goes onto the floors or not.

Ranbir Kapoor is okay as the lead hero Shiva. His screen presence is good and the way he acted without anything in front of him should be praised. There were some complaints about his dressing in the film. Alia Bhatt lit up the screen with her beauty and turned out to be one of the film's biggest attractions. But her character is not etched properly. Amitabh Bachchan is decent as the teacher and added a lot of weight to the character. Nagarjuna was showcased as a powerful man but he looked too normal. His acting is decent and his fans may get disappointed. Mouni Roy did a brilliant job as the villain.

Songs by Pritam were fantastic. Though they weren't placed perfectly, they stand out. The background score by Simon was too loud at times though it elevated a lot of scenes. The visuals are very good and the work of every cinematographer is seen on the screen. The visual effects are great though it will be interesting to see how the audience receive it. The production values are top notch as Karan Johar & Co did not compromise at any point. Ayan Mukherji who is known for his feel good emotional rom-coms like 'Wake Up Sid' and 'Yeh Jawaani Hai Deewani' disappointed big time with 'Brahmastra'. He focused heavily on grandeur and visual effects. While his presentation and vision should be commended, it is his own writing that let him down.