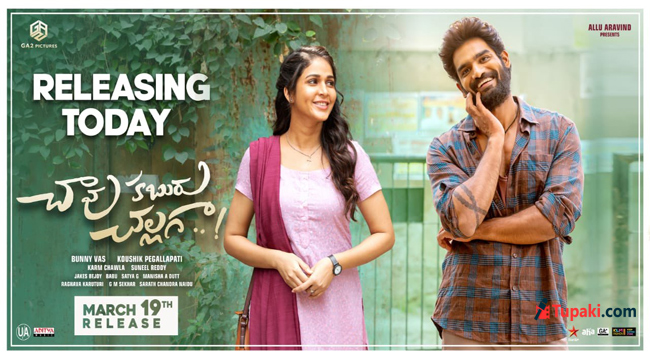 Young actor Karthikeya who shot to fame with 'RX100' is doing films at a quick pace but he is not getting the success he needs. He is back again with 'Chaavu Kaburu Challaga' which has a unique plot. Made under 'GA2 Pictures', this film has a decent buzz around it and let us take a look at how the film is.

Basthi Balaraju (Karthikeya) is a youngster who drives the vehicle that carries dead bodies for a living. Constant contact with death makes him rough and one day he meets Mallika (Lavanya Tripathi) who is mourning her husband's death. He falls head over heels and starts running behind Mallika who hates him. How Balaraju convinces Mallika to marry him forms the rest of the story.

The concept of a 'Swargapuri' vehicle driver falling in love with a woman who just lost her husband is quite interesting. It definitely grabs your interest and the promos projected this point too. But it quite challenging to make a film entirely on this single concept and it is what disappointed the audience the most in 'Chaave Kaburu Challaga'. People who expected a lot by looking at the 'GA2 Pictures' name on the posters might not be impressed as the film leaves a lot to be desired.

The film starts off on an interesting note and has some well-written scenes but it lacked the necessary emotion and entertainment value throughout its run. After a good start, the graph goes down with some regular scenes and appears a bit routine. The love story between the lead pair hasn't been established well enough as people fail to connect with either of those characters. The scenes involving the hero running behind heroine and teasing her and pleading her to love him tests your patience after a certain point. The heroine hates the hero for a long time but her entire perception changes in one scene which isn't convincing. The hero's role behaves oddly at times which may not work in favour of this film.

The interesting premise and the mother role played by Aamani offers some respite. She played the role of hero's mother and her track has been dealt in a mature way and the dialogues have a lot of depth and philosophical touch to them. There are not many engaging moments in this film and it lacked tight narration that can keep the audience glued to their seats. The climax portion has been executed really well starting from performances to the writing but the damage has been done already as the entire second half is filled with dull moments.

Compared to his previous films, Karthikeya looked different in this film and did well to fit into such a peculiar character. Despite the flaws in his role, Karthikeya did a very good job. His acting in the climax portions deserves a special mention. Lavanya Tripathi did a non-glamorous role and she did a decent job. The dimpled beauty doesn't have a lot of scope to showcase her acting capabilities but made her presence felt. Maurali Sharma is fine and Srikant Iyengar is okay. Aamani was superb in the mother's role and played her part with aplomb. Bhadram provided the entertainment in the first half but his character has been cut short in the latter parts.

After 'Taxiwaala', Jakes Bejoy gave good music for this film and background music is apt. But none of the songs stay with you as they don't have the repeat value. The cinematography is good and so are the production values from Bunny Vas. The artwork is adequate but it is the dialogues that impress you the most. They are quite thought-provoking and soulful. Editing is okay though some scenes in the second half could've been trimmed.

Coming to the debutant Koushik Pegallapati, he came up with an interesting story and created interest among the viewers. But he failed to write some strong scenes both on the emotional as well as entertainment front. He managed to get good performances from the actors but his writing and execution needed to be better.

A good start and a good ending but go wrong in the middle.