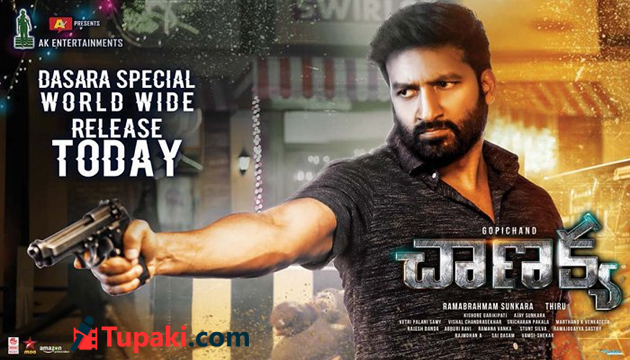 Gopichand Thota proved himself as an action hero with many films like Ranam, Yagnam, etc. He has been facing major box office rut with his recent releases. After Pantham, Chanakya is next release and we have, F2 actress, Mehreen Kaur acting as the female lead. Thiru wrote and directed the film in Anil Sunkara, Ram Brahmam Sunkara production. Let's see how the movie is ...

A RAW Agent, Arjun (Gopichand) captures Abu Salem, right hand man for Ibrahim Khureshi (Rajesh Kattar). Ibrahim and his son, Sohail (Upen Patel) try to get intel on the RAW Agents placed in Pakisthan. Their plan to attack G8 Summit to make India look bad. Arjun on one hand investigates Ibrahim Khureshi and Sohail's wareabouts to capture and on the other hand, lives as a bank employee, Ramakrishna. Aishwarya (Mehreen) falls in love with Ramakrishna but she doesn't know the truth. Sohail's terrorists attack Arjun and Aishwarya. What will happen next? Can Arjun stop their plan? Who is Zubeida (Zareen Khan)? Watch film for answers ...

This film tries to explore a 90's style story in unrealistic manner. It tries to capture the old world charm with Salman Khan's Ek Tha Tiger kind of franchise films but nothing really clicked. Right from first scene, we know how the film will unfold and that is a big disadvantage. In an action thriller, if we can guess everything miles before it happens on screen, we lose interest.

This just looks like Golimar's retelling from Gopichand rather than RAW Agent story. Even Vijay and A.R. Murugadoss tried to mix commercial elements with believable "realistic" approach in Thuppakki. But here Thiru, the director and writer, completely left out the logics and tried to mount the film on action, that too a regular mass masala kind.

Also, movie team tried to cheat the audiences with geographical details and it is evident that they shot most of the scenes in and around Hyderbad even the outdoors except for Rajasthan fight sequences, trying to pass it off as Karachi, Pakisthan. A bit more research and a lot more effort in execution could have helped the film.

Showcasing scenes like Heroine trying to do comedy with Dog mating and at the same time falling in love with hero, did not come out well. You can see that even actors did not enjoy those scenes as much as others. Such jokes cannot entertain a family crowd and with a class touch to even those scenes, Thiru seemed to be confused about what he wanted to achieve from them. We did see such a track in Puri Jagannath's Temper and this feels another version. Such kind of unnecessary compromises kill the film and that's what happened in Chanakya too. Even second hour which is more action packed lacks any impact.

Gopichand slightly sleep-walked as Bank Employee and his look is trendy but it did not help the film. He needs to get better at selection of scripts as even stars are looking to come out of the routine. These kind of scripts need strong writing but this one missfired in that aspect. Mehreen Prizada is beautiful but wasted. Zareen Khan couldn't really emote well. All others are just there to try and help hero but they contribute nothing. Ali's comedy is too routine.

Cinematography by Vetri is good and the visuals are eye-pleasing. Anil Sunkara and Ram Brahmam Sunkara did not mount the film on a small scale. The production values are rich and high for any Gopichand film. Story-Screenplay-Direction by Thiru is not upto the standards that we expect from an experienced director like him. This film is too old school and Vishal Chandrasekhar's music did not fit the bill. Sri Charan Pakala did try but he couldn't catch the same form as his Evaru or Goodachari. Dialogues by Abburi Ravi are surprisingly blunt.


Disclaimer: Do not take this review as the ultimate classification of the movie. Please use discretion and watch the film to form your opinion. This review is to help you in that process only.