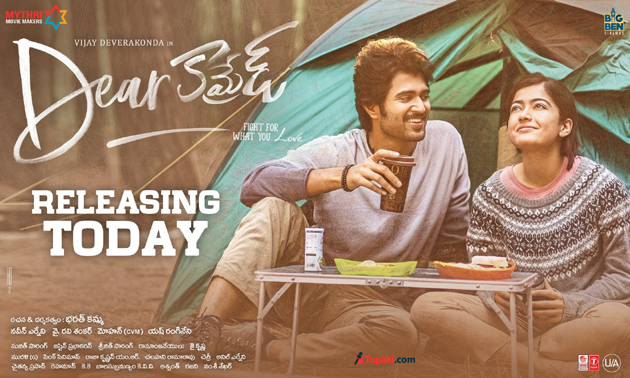 People eagerly wait to watch Vijay Deverakonda either because they love his attitude or the kind of subjects he picks up. The Rowdy reunited with his Geetha Govindam Co-Star Rashmika Mandanna for 'Dear Comrade'. Expectations were humongous on this Intense Love Story. Has Bobby & Lilly did enough to hit the bull's eye?

Chaitanya alias Bobby (Vijay Devarakonda) is a student leader who believes in Communist ideology and gets into fights quite often. Aparna Devi aka Lilly (Rashmika Mandanna) is an aspiring Woman Cricketer. They meet in a wedding happening in Kakinada and fall in love. Bobby's violent streak terrifies Lilly and eventually leads to their separation. What happens when they meet unexpectedly after 3 years forms rest of the tale!

Vijay Devarakonda is so natural as a hot-headed Student Leader. You don't get surprised watching him perform due to the similarities with 'Arjun Reddy'. Of course, There is absolutely nothing to find fault with his performance. He left a mark of his own in every sequence with his terrific screen presence, dialogue delivery and performance. The way he performed in the emotional scenes is appreciable.

Rashmika Mandanna steals the show playing a role which is as crucial as that of the hero. Its a once-in-a-lifetime role for her! You just can't imagine any other actress in the emotional scenes featuring Rashmika. She did excel in the role of Lilly, who is loveable, vulnerable and heart-broken.

Suhas shines as Hero's Friend. Rest of the Actors in the friends group did a fine job. Charu Haasan and Anand performed well. Shruti Ramachandran is impressive in the role of Heroine's Sister. The Actor who did the role of Cricket Selector is too good.

Technicians has given their best for 'Dear Comrade'. Especially, Music composed by Justin Prabhakaran is outstanding. Each & every Song in the album is so special. Even the picturization of the songs is refreshing. With Background Score, Justin Prabhakaran has once again left a mark of his own. Camera Work by Sujeeth Sarang is so pleasant and gives a feeling of watching a classic film. Dialogues penned by Jaya Krishna are simple yet effective. Editing isn't up to the mark. Rich Production Values were maintained by Mythri Movie Makers & Big Ben. Director Bharat Kamma failed to do complete justice to the golden opportunity. He showed the spark in him at times but failed to narrate the subject in a gripping manner. Of course, Bharat Kamma did a fine job while dealing romantic track and emotional scenes. 'Dear Comrade' would have been a special film if the Second Half was on par with the First Half.

'Dear Comrade' doesn't have a great story but what makes it unique is the characterisations of Hero-Heroine and casting Vijay-Rashmika in the beautifully designed Love Story. It's the chemistry of the Lead Pair and their arresting performances which make this flick watchable. Director Bharat Kamma presented the love story in a very appealing manner. First Half gives a feeling of watching a classic though the narration is a bit slow but deviation from the actual story with an inclusion of sub-plot in the Second Half proved costly. An opportunity to make this film a classic has been lost in such manner.

Bharat Kamma certainly have the potential but focussing on too many aspects worked against him. He not only tried to present an intense love story but also included communist ideology and discussed about a social issue as well. Especially, Politics in cricket and sexual harassment on Women Cricketers didn't sync with this subject. Inclusion of unnecessary scenes in a pleasant Love Story could have been avoided. Even the scenes depicting Communist Ideology weren't presented effectively.

'Dear Comrade' has got few positives. Love Story of Bobby and Lilly is the highlight of all. Vijay Deverakonda and Rashmika Mandanna makes you fall in love with their romantic track. Beautiful Moments between the Love Birds, Good Music and Pleasant Cinematography keeps the First Half very entertaining.

The problem is with the Second Half. Except for the Road Trip, Director failed to handle rest of the scenes properly. While the viewers expected a highly emotional ending, The Climax is nowhere close to the expectation and that's a big disappointment. Overall, 'Dear Comrade' can be watched once for the feel-good Love Story, Terrific Performances of the Lead Pair and Good contributions from the Technicians.

Bottom Line: Watch It Only For Romantic Track!