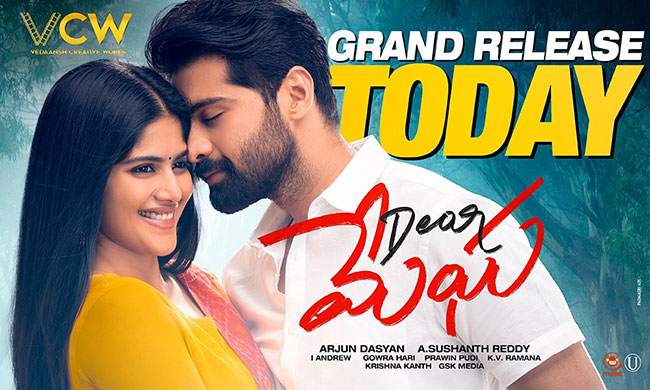 Adorable girl Megha Akash's Tollywood career wasn't smooth till date. She faced only failures till date but she scored her first success with 'Raja Raja Chora' recently. Now, she is playing the title role in her recent release 'Dear Megha'. The promotional content is quite appealing and let us see how the film turned out.

Megha (Megha Akash) loves her college senior Arjun (Arjun Somayajula) but hesitates to tell him. Three years after college, they both run into each other and Megha finds out that Arjun also loved her in college. They enter a relationship and enjoy life but they get severely injured in an accident. Arjun becomes brain dead and fearing about Megha, her parents say that Arjun died in the accident. Megha tries to commit suicide but she meets Aadi (Adith Arun). Meeting Aadi brings the old Megha back and she starts falling for him. At this juncture, Arjun recovers and meets Megha. What happens now? Whom does Megha pick now? All these questions will be answered in the movie.

There is no guarantee that a film that did well in one language succeeds even when you remake it as it is. Sometimes there will be something missing in it and this usually happens in love stories. 'Vaana' is a big example of this. The film is an exact copy of the Kannada film 'Mungaarmalle' but the film was a failure despite the hit songs. The same is the case with 'Dear Megha' which is a remake of the Kannada film 'Diya'. It was a faithful remake but the soul was missing in the Telugu film. Despite an emotional story, the narration turned out to be the film's biggest drawback. A few artificial scenes, some love scenes that did not work out and a narration that doesn't suit our audience taste worked against the film. There used to be a time when people used to think that your life is with a single person and it is over when he dies. But things changed now and many films came which say that there is life even after love. 'Dear Megha' treads on a similar path and the triangular love story has good twists too. But the serious proceedings and not-so-interesting love stories fail to create an impact. The feel goes completely missing in the first love story. A lot of heavy dialogues were included in this track but the visuals don't support them. The actors failed to showcase the chemistry and delivered a mediocre performance. While the film goes on a dull note, the twists manage to create an interest among the viewers. Adit as Aadi lights up the screen when he enters and adds energy to the proceedings. But the love scenes look a bit forced and unnatural. This made the audience feel no emotion when the pair get separated. The makers gave another twist through the mother's character played by Pavitra Lokesh. The climax is quite heartbreaking but barring a few twists and the ending, the film had nothing nice to offer. The film has a crisp run time but it feels like that the movie is dragged to no end. Love stories require a lot of feel and emotions but it is what went missing. While the songs and visuals try to breathe life into the movie, it doesn't work out well. The screenplay plays the spoilsport in this emotional story.

Megha Akash looked very cute but she needs to improve when it comes to acting. She played a role that required to showcase a lot of emotions but she doesn't have that range. Adit Arun scored brownie points with her acting and he was quite active. His voice was also quite good while Arjun Somayajula appeared dull on the screen. Pavitra Lokesh did complete justice to her role and the rest of the cast are fine.

Gowra Hari's music suited the movie and despite some songs appearing as speed breakers, they are good to listen to. Sid Sriram's song stands out and the cinematography by I Andrew is great. The production values are decent and director Sushanth Reddy followed the original as it is but failed to make the scenes look natural. The slow narration was one of the main problems in the original too and it was replicated in the remake too. The soul was missing which was its biggest drawback.