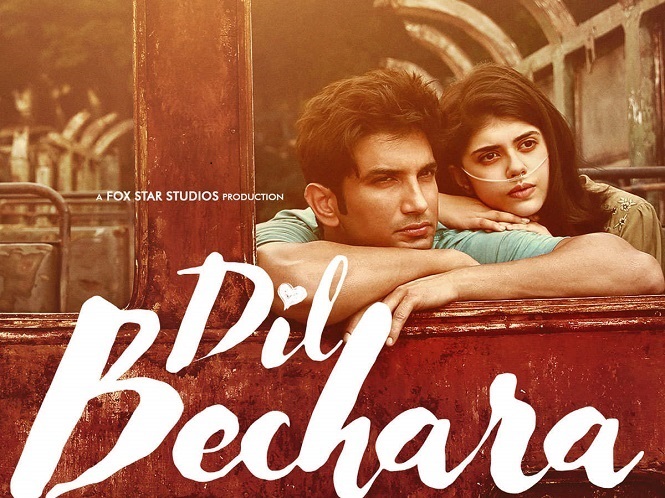 'Dil Bechara', one of the most awaited films was released on Disney Hotstar now. It is the last movie of shining young talent Sushant Singh Rajput who unfortunately left everyone. The OTT platform decided to pay tribute to Sushant by streaming it for free. A lot of fans eagerly waited for this film and as soon as it went online, people flocked into the OTT platform and it is creating records in terms of views.

The film is an Indian adaptation of John Green's novel 'The Fault In Our Stars'. The story revolves around Kizzie Basu (Sanjana) is a cancer patient who leads a boring life until Manny (Sushant) comes into her life and brings tons of smiles and happiness along with him. He is also a person battling cancer and the youngsters embark on a journey together in this rollercoaster of romance, life and emotions.

'Dil Bechara' is a heart-warming tale which requires actors who can carry the entire film. Despite the perfect writing, it is the actors who need to make the audience glued to their seats. The makers were spot on in getting a perfect cast. Sushanth Singh Rajput is the perfect choice for this film as he oozes charm in every frame while Sanjana Sanghi's cuteness and mesmerising performance is sure to remain with you forever.

The basic plot reminds Telugu people of Mani Ratnam 'Geetanjali' but the narration and storytelling are unique. The film may feel dragged during some parts and the slow pace may not appeal to everyone but a movie like this should not run after commercial viability and the makers need to be commended for that.

There not many flaws to point at this film and all you do is enjoy and relish Sushant for one last time. The dialogues are so deep and profound that you connect to them instantly. It is Sushant and Sanjana that carry the entire film as they make you laugh, cry and get emotional with them.

On the whole, 'Dil Bechara' is a film that remains in you heart forever. We learn a lot about life through this film and it should not be missed. If not for the touching storyline, watch it for Sushant Singh Rajput.

'Dil Bechara' is Sushant Singh Rajput's film. His charm, infectious smile and terrific portrayal of emotions leaves you awestruck. There are times when you relate to Sushant's personal life through this reel character. His spoke through his eyes and leaves you in tears during the emotional scenes. He gave his best performance in this film and it is our bad luck that we lost such a flawless performer. His hard work and talent are visible in frame and Sushant will remain in hearts forever through this film.

Sanjana Sanghi is a perfect choice for this film. She is cute, relatable and gives a strong performance. She perfectly carried the emotions of Kizzie's role and she has a great future ahead. Saif Ali Khan gives a special appearance which is decent while Swastik Ved's brings a few laughs as Manny's friend. Swastika Mukharjee and Saswata Chatterjee too did a splendid job.

Mukesh Chabra who directed this film succeeded in bringing the best out of his actors. He managed to deliver a film filled with a lot of heart. Despite a depressing plot, he narrates the film in an entertaining way but also made sure that the emotions are portrayed perfectly. The work of the writers was commendable as they adapted the film smoothly and made it look like an Indian film. Dialogues as discussed earlier were very deep and touches you. If there is any one technician who stands out, it is legendary AR Rahman who breathed life into this film with his tunes and background scores. His songs may not be chartbusters but films like these need tunes that makes you connected and stays with you even after completing the film and that is what AR Rahman did. Cinematography is superb while editing is crisp even though the narration is slow.

'Dil Bechara' is a film that remains with you forever not just because of Sushant Singh Rajput but also for its heart-touching story. Sushant as Manny is the best way for us to remember this brilliant actor who left us. 'Dil Bechara' is a must watch for everyone as it teaches you how to live life in the most complete manner.