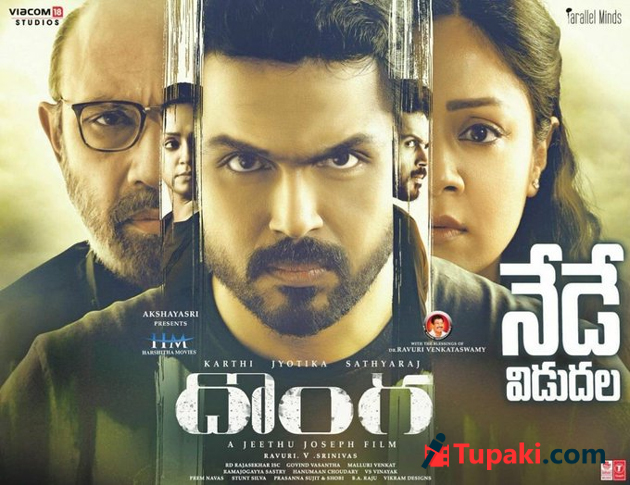 After a super hit 'Khaidi', Tamil hero Karthi is back onscreen again with 'Donga'. Directed by Jeethu Joseph, this film has Karthi's sister-in-law Jyothika playing his sister role. Despite the low promotions, the film is releasing today with decent expectations and let us see how the film is.

Vicky (Karthi) is a trickster and a tourist guide. Murthy (Satyaraj) takes him to his home and introduces Vicky as his son who left the home 15 years back. Vicky slowly gains the acceptance of his elder sister Parvathy (Jyothika) and the rest of the family members. But some people try to assassinate him for unknown reasons.
What will Vicky do to survive? Why are the bad guys after him? Why did Murthy's son leave his home in the first place? All these questions will be answered on the screens nearby.

Director Jeethu Joseph (original 'Drushyam' fame) is known for dealing family entertainers mixed with excitement and twists. For this film too, he followed the same pattern. He blended an emotional story of a wrong guy going into a lovable family and winning their hearts with some interesting twists hidden under its sleeve.

The film starts off on a dull note and snail pace during the initial half may test your patience at times. The romantic thread involving Karthi and Nikhila Vimal is pale and a few songs are badly placed. The much-hyped sister-brother bonding scenes between Karthi and Jyothika are very few. Though they are good, they are quite inadequate. The story slightly reminds you of 'Athadu' during the first half. With all these, you expect the film to go down further in the latter parts.

But the film turns interesting towards interval and the second part keeps you guessing all the time with twists unraveling one after the other in quick successions. The screenplay picks up pace in this half and the twist in the second half salvages the film to a large extent.

On the whole, the second half saves the film from drowning. It makes for an interesting watch f you could ignore a relatively dull first half. But don't go expecting a 'Drushyam' level output from Jeethu Joseph. Also, the film is low on the entertainment front which doesn't suit a section of the audience.

Karthi is in full form and he carries the film on his shoulders. He impresses you big time and his scenes with Jyothika came out really well. Jyothika had less to do in this film but she did a decent job in the space given to her. The onscreen chemistry of Karthi and Jyothika as brother and sister worked out amazingly. Satyaraj once again proves his worth in a substantial role. Nikhila Vimal is okay as the love interest of the hero and the rest of the cast which consisted of Tamil actors were apt.

The film was backed by a good technical output. Cinematography by RD Rajesekhar is superb as he supported the director's vision completely through his lens rather than going extravagant. Music by Govind Vasantha is decent. Though his songs don't get registered, it is the background score that elevates the proceedings a lot. Editing is fine but some scenes in the first half dragged down the pace. Telugu dubbing is sufficient while the production values look rich.

Director Jeethu Joseph came with a good story and an interesting screenplay. His brilliance can be seen in latter parts of the film and during some emotional scenes. Had he taken care of the dull first half, this film could have worked wonders.