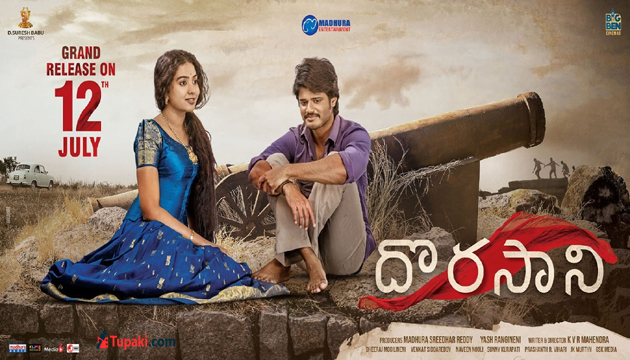 'Dorasani' drew the attention of movie lovers mainly because it's the launch pad of Vijay Devarakonda's Brother Anand and Rajasekhar's Daughter Shivatmika. Beautifully presented Posters & Promos generated required buzz for the film ahead of the release. Will the Box Office result makes it a sweet memory for the two newbies?

Sivanna (Kishore), a naxal, walks out of prison after serving 30 years of Jail Sentence. He goes in search of his Friend Raju (Anand Devarakonda) soon after his release and recalls the life journey of his Close Buddy during this process. Love Blossoms between Poor Man Raju & Village Princess Devaki (Shivatmika). Rest of the story is about what they had gone through because of the discrimination on the grounds of caste and social status. Watch 'Dorasani' to know if Raju and Devaki's love story had a happy ending or not!

Everyone is curious to know how Anand Deverakonda and Shivatmika performed in 'Dorasani'. Although they doesn't lookalike a Hero-Heroine Material, One must say they did perform well in their respective roles. They acted as per the requirement of the characters and made their part look so natural. That is why their chemistry became the highlight of the film.

Vinay Varma as Heroine's Father and Kishore as Naxal has done justice to their roles. Sharanya does a fine job. Even those who appeared as Hero's Friends leave a good impression.

'Dorasani' is technically sound. Songs composed by Prashant Vihari are worth praising. Crucial Scenes in the movie were elevated with impressive Background Score. Cinematography by Sunny Kurapati is an asset. Producer Madhura Sreedhar and Yash Rangineni deserve a special mention for believing in such a subject. Director KVR Mahendra tried to present a love story with utmost honesty. He deserves appreciation for creating an atmosphere that used to be 30 years ago and extracting the best from his Cast & Crew. Failure is showing any novelty in the story and slow narration are the major drawbacks.

'Dorasani' is all about the consequences Love Birds has to face if their social status doesn't match. Plenty of films have been made with similar storyline so far. That is why Director KVR Mahendra tried to make it stand unique by choosing 80s backdrop and depicting the domination of landlords in Telangana villages in those days. Rural Atmosphere & Situations prevailing during that period has been presented in an authentic manner. It's the backdrop which makes this Love Story look a bit different, other than that there is no freshness in the subject.

What happens if a Son of a Daily Wager falls in love with the Daughter of a Landlord three decades ago? That is what you get to see in 'Dorasani'! The story and screenplay of this launch pad is no way beyond the expectations of the viewers. Heroine starts admiring Hero because of his poems and they end up falling in love after getting to know each other. Heroine's Father tortures Hero using his influence ever since he comes to know about the love affair.

Full credit to the Director for presenting Telangana's Rural Set-Up, Language and Dialect in an authentic manner. Performances of the Cast has been impressive though majority of them are either newbies or not familiar to the Telugu Audience.

Few good moments featuring the Lead Pair are so pleasing to watch. Even Music and Cinematography are spot on. Still, 'Dorasani' fails to engage the viewers due to Routine Story & Lethargic Narration. It might be a good film but doesn't have much to get connected to the present generation.