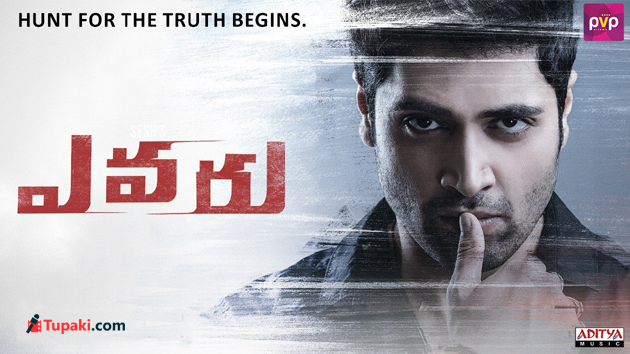 With 'Kshanam' and 'Goodachari', Adivi Sesh not only build good reputation but also created market for his movies. 'Evaru' is the latest thriller offering from him. This flick which generated positive buzz with the promos released Today.

Sameera (Regina Cassandra), who is the wife of an Industrialist, gets charged with the murder of DSP Ashok (Naveen Chandra). She claims to have committed the crime for self defence as the Police Officer tried to sexually exploit her but there is some mystery. Sameera takes the help of a Corrupt Cop Vikram Vasudev (Adivi Sesh) to bail out herself from trouble. In the process of helping Sameera, Vikram Vasudev unravels the mystery. Did Sameera really kill Ashok? Did Ashok tried to rape Sameera? Will Vikram Vasudev save Sameera? Watch 'Evaru' in theatres nearby to know the actual truth!

Marvelous performances by all the three Lead Actors (Adivi Sesh, Regina, Naveen Chandra) deserves a special mention. Especially, Regina delivered her career-best performance in the bold yet toughest role. She portrayed the character of Sameera which has got many shades beautifully. As corrupt cop, Adivi Sesh appeared a bit over-confident intially but he did a good job in the later half. His screen presence and performance stands out by the time movie nears completion. Naveen Chandra came up with an intense performance. The Youth who played Cancer Patient has done his job to perfection. Murali Sharma did well inspite of limited screen time. Pavithra Lokesh makes her presence felt.

Background Score composed by Sricharan Pakala is too good to spot any flaws. It kept the viewers in the right mood from the start to finish and elevated the interesting twists. Camera Work by Vamsi Pachipulusu is topclass, especially close-up shots. Half of the movie is just conversations between two people in a room. Yet, He succeeded in ensuring viewers doesn't feel monotony. Dialogues by Abburi Ravi are superb. Production Values are on par with PVP Standards. Director Venkat Ramji left a mark of his own in the debut flick itself. Changes made to the story of 'The Invisible Guest' and the way he adapated the Spanish Crime Thriller is out-standing. Even though it's a remake, He managed to show his calibre by serving a gripping thriller.

'Evaru' keeps the viewers guessing till the very end and deceive them throughout. Having two or three good twists in a feature film is more than enough to keep the proceedings gripping. In this thriller, You will get to see plenty of them yet none of them appear like a forcible inclusion. 'Evaru' might be a remake of Spanish flick 'The Invisible Guest' but few key changes were made to the Story & Screenplay to make it even more thrilling. Superb Performances of Lead Actors and Technical Brilliance have been an added attraction. Undoubtedly, This is one of the best thriller flicks made in Tollywood.

In 'Evaru', A Single Sequence will be shown four times and we keep hearing the same dialogue repeatedly but that doesn't make you feel restless because of presenting new perspective every time. 'Evaru' begins like any other Crime Thriller. After few minutes into the conversation between two people, Twists were unraveled one after the other to deny any scope of getting distracted. Viewers mayn't be able to understand few details because of the sharp editing and quick pace in the narration yet the proceedings remain gripping throughout.

First Half of 'Evaru' is good enough. It's actual strength is in the Twists n Turns in the Second Half. Climax is the major highlight of this crime thriller. The Twist related to Adivi Sesh's role is mind blowing to say the least and it gives an emotional high towards the end. Compared to the Original, The way Adivi Sesh's character was designed is completely new way. Even if you have watched either 'The Invisible Guest' of 'Evaru' already, 'Evaru' won't disappoint if it's been seen with an open mind. This Thriller appears to be a bit complicated..how Movie Buffs, other than Thriller Lovers, receive it is a mystery for now.

Bottom Line: A Must Watch Thriller!