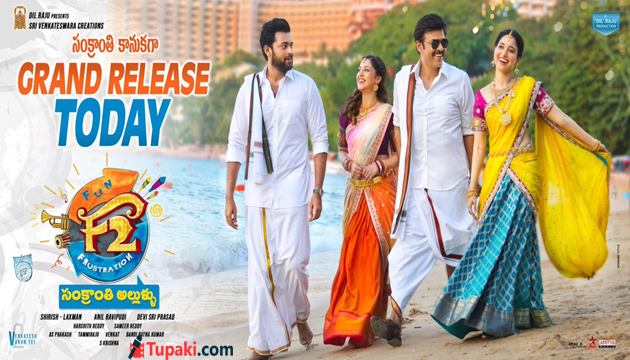 'F2: Fun And Frustration' gave an impression that its a perfect Family Entertainer for Sankranti Season. Crazy Combination of Venkatesh and Varun Tej, 100% Success rate of Anil Ravipudi and Brand Image of Dil Raju fetched it ample buzz. Let's see if the multi-starrer lived up to the expectations...

Venky (Venkatesh) who works as MLA's PA marries Harika (Tamannah). Frustration Levels keep growing in Venky within few months after the wedding. During the same phase, Varun(Varun Tej) falls in love with Harika's Sister Honey (Mehreen) and faces problems even before marriage. While his marriage arrangements were happening, Varun goes to Europe  along with Venky for a jolly trip. What consequences they had faced for it? Whether Venky and Varun learn how they could lead a happy married life? Do watch 'F2' to know much more about their Fun and Frustration!

Venkatesh is the main highlight of 'F2'. After a long gap, Movie Lovers got to see Vintage Venky. He is at his very best in the full-length comic role. Facial expressions and the comic timing of Venky are unmatchable. He entertains thoroughly taking references from his old movies.

Varun Tej tried his best when it comes to Telangana Slang and matching up to Venkatesh, but there is room for improvement. One must say, He didn't disappoint though it's his first attempt at slapstick comedy.

Both Tamannah and Mehreen Kaur impress with her glamour. Mehreen's Expressions were quite good. Prakash Raj & Rajendra Prasad failed to leave a mark of their own. Priyadarsi tickled the funny bone. Vennela Kishore was wasted. Pragathi and Raghu Babu entertains. Annapurna and Y Vijaya have done justice to their roles.

Poor Form of Devi Sri Prasad continues. None of the Songs have been good enough. Even the Background Score isn't anything special. Cinematography by Sameer Reddy is flawless. Production Values were alright. Yet again, Anil Ravipudi proved entertainment which appeals to all sections of people is his forte. He succeeded in presenting the struggles of Husbands in an entertaining manner. Dialogues penned by him are hilarious. Anil Ravipudi missed an opportunity to score a blockbuster by not focussing much on the story.

Entertainment is the forte of Anil Ravipudi. He have the knack of narrating any subject in an entertaining manner. Audience could easily relate to his mark situational comedy & sharp dialogues. When such a Filmmaker teams up with Venkatesh who is known for terrific comedy timing, There will be no dearth of hilarious moments. Venkatesh received the right kind of role after a long gap and he just took it to the next level. Venky's Comic & Anil Ravipudi's Writing produced rib-tickling moments in the First Half. As if it was to justify the title, Anil Ravipudi frustrates the audience with silly comedy tracks in the Second Half.

Venkatesh is an asset for 'F2'. After Malleswari, He hadn't done any full-length comic roles. Character done by Venkatesh in 'F2' reminds us of the Vintage Venky. Particularly, The dog sequence is hilarious. This is where Anil Ravipudi should his impeccable sense of humour. There were many such enjoyable moments in the First Half. Not just Venky, All the Actors entertain until the Interval. Anil Ravipudi showed how Wives could influence Husbands in an entertaining way. Over-enthusiasm shown by Venkatesh during the engagement sequence tickles the funny bone. Even the engagement of Varun has been dealt in a hilarious manner. By the end of First Half, Audience have the feeling of watching a full-length comedy flick.

Unfortunately, Second Half of 'F2' fell short of the expectations. Anil Ravipudi failed miserably when it comes to narration of the story. He continued to rely on the lighter-vein approach and that strategy back-fired. Twist n Turns in the Second Half are too silly. Most of the scenes appear illogical. Although few scenes were entertaining, Second Half wasn't engaging due to the silly sequences. Overall, 'F2' have ample Fun and a bit of Frustration as well.