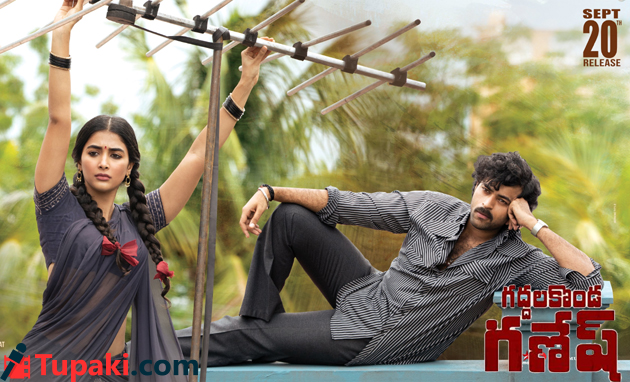 Getting the makeover of Varun Tej exceptionally well built the buzz required for 'Valmiki'. Tension prevailed in the past few days over the title controversy ended with Makers succumbing to the pressure. Finally, The first ever out & out mass flick of Mega Prince released Today. What this Mass Drama could offer?

Abhilash (Atharva Murali) is an aspiring Filmmaker who wishes to make a film based on the life story of a real life Gangster Gaddalakonda Ganesh (Varun Tej). He does the research needed by getting closer to the Gangster. Here comes a twist...Gaddalakonda Ganesh wants to be the hero of the project inspired from his life story. How did Abhilash handle such a tricky situation forms rest of the tale.

Accepting the negative role and undergoing drastic makeover for it is the best thing Varun Tej did in his film career. Gaddalakonda Ganesh will remain as a memorable character in his career. Varun Tej deserves all the praises coming his way. No other Actor would have looked better than him in this role. Be it the look or mannerisms or body language or dialogue delivery, Everything appeared more than perfect to make the masses go crazy. Watching him in such a wild character is like a pleasant surprise for all those who liked his settled performances in previous films. Dominance of Varun Tej was so much that not even a single artiste could come anywhere close to him.

Mickey J Meyer unleashed a new angle in him with this mass entertainer. Mass Songs and Pulsating Re-Recording are an asset to 'Valmiki'. With this flick, This Talented Composer showed his calibre of offering goosebumps with mass beats. Cinematography by Ayananka Bose fetched rich look for the movie. Production Values of 14 Reels are superb. Harish Shankar has yet again showed his expertise at handling remake subjects. Modifications he offered to 'Jigarthanda' to reach out to the masses are really praise worthy. Some of the Dialogues penned by him are terrific. Special mention for the one-liner, 'Nammakam Pranam Lekka, Okkasari Pothe Malli Tirigi Radhu'.

'Jigarthanda' became a cult classic because of the Novel Story and wow factor in the role of Antagonist. The negative role essayed by Bobby Simha became a highlight. When such a film was remade in Telugu, Any other Director would have preferred this Tamil Actor for the villain role. This is where Harish Shankar showed how different his thoughts would be like by casting Varun Tej, who has done mostly class films, in an out & out mass entertainer. In fact, He designed the role much more powerfully than the Tamil version. That's how the risk taken by him has paid off! Those who watched the Original might even feel the class/classic touch gone missing because of the over-powering of mass elements. Still, It must be said that Harish Shankar made 'Valmiki' the right way to suit the sensibilities of Telugu Audience.

Viewers connect with the character of Gaddalakonda Ganesh so much that they doesn't bother about the flaws in the movie. This character entertains thoroughly and keeps the proceedings engaging mostly. Varun Tej guarantees new experience to the Telugu Movie Buffs with his new get-up, mannerisms, body language and dialogue delivery. Harish Shankar succeeded in making viewers feel excited every time Varun Tej appeared on the screen.

Interval Bang is being designed exceptionally. Second Half of 'Valmiki' is beyond anyone's anticipation. Twists n Turns raise the curiosity. Compared to the Original, Role of Hero's Mother was increased in Telugu Version for incorporating sentiment. Even the character of Tanikella Bharani was etched out well. Cameos of Nithin and Sukumar in the climax are like special attractions.

On the flip side, Couple of scenes meant to establish how cruel Gaddalakonda Ganesh is like appear repetitive. Flashback is very ordinary that viewers wait to see 'Velluvachi Godaramma' Song. Picturization of this remix track and the manner in which Flashback was ended were impressive. Harish Shankar took way too much time to establish characters and that resulted in excessive length of over 170 minutes. Few scenes could have been edited to make the film look crisp. 'Valmiki' loses track in the Pre-Climax and even the pace gets dropped. Of course, There are many factors which work in favour of 'Valmiki'. Harish Shankar succeeded in offering a mass touch to the class story he borrowed from Tamil. Overall, 'Valmiki' will be the most preferred film to watch in theatres for the next one week!