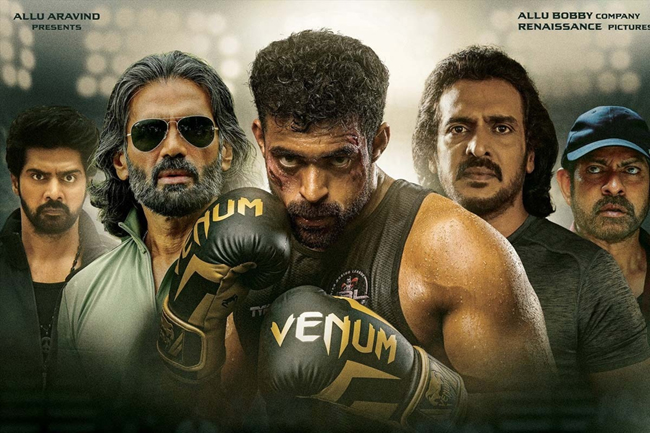 After scoring back-to-back hits like 'F2' and 'Gaddalakonda Ganesh', Varun Tej has arrived with his 10th film 'Ghani'. This sports drama is directed by Kiran Korrapati and Saiee Manjrekar is making her debut with this flick. The film was postponed many times but it finally arrived this Friday amidst decent expectations. Let us dive into the review straight away to find out how 'Ghani' is.

Ghani (Varun Tej) develops hatred towards his father as he gets caught in the doping test during his days as a boxer. Though he promised his mom that he would never become a boxer ever, he practices boxing secretly in order to restore his family's lost prestige. While he is close to achieving what he wanted, the opponent brings his father's name which makes 'Ghani' lose his control. He gets disqualified due to this. He gets to know the truth about his father after that and how he achieves his goal despite the hurdles forms the rest of the story.

Emotion is the most necessary element in a sports drama. Films like 'Chak De India', 'Dangal', 'Bhaag Milkha Bhaag', 'Jersey', 'Thammudu' and a few others have a strong emotional point that strikes a chord with the audience. It is through that emotion, we get to connect with the lead character and cheer for him throughout his journey. Any sports drama will be successful if that emotional point clicks with the viewers. But Varun Tej's 'Ghani' failed to bring out the required amount of emotion despite all the hard work and money spent on the film. The reason behind the hero's goal is quite regular and the flashback is very routine which doesn't bring out the required emotion. Barring a few scenes, there are no extraordinary moments in this film.

We have seen a lot of Telugu films that are based around boxing. Movies like 'Thammudu' and 'Amma Nanna O Tamil Ammayi' were highly successful. Apart from the game, other elements too worked out well in those movies. But 'Ghani' is a full-fledged sports drama. So, the viewers expect more emotion related to the lead character and the sport. With a debut director making this film, we expect a lot of new ideas and taking which will surprise the audience. But Kiran Korrapati did not try any of those things. Except the betting mafia angle attached to the concept, there is nothing new in this film. We predict each and every beat which makes it a bit boring. An actor like Upendra needs an author-backed role but his character and the flashback part make one think why Upendra accepted such a movie.

It is very important to take the audience into a special zone for a sports drama. We do not get such an experience throughout the movie except for the climax. The basic point of hero going against the promise made to his mother and making it big in boxing is wonderful but it is not executed properly. A lot of points were left unexplored by the director like the way Ghani practices without getting caught by his mother has not been showcased. The director did not give us a chance to own the hero's character as no strong emotions are showcased. There is no intensity in the character though he has a target to which he dedicates his complete life. While the boxing sequences are decent, the love track definitely tests the patience of the audience. The sentiment between mother and son also leaves a lot to be desired.

There is no standout scene in 'Ghani' till the interval. The flashback part starts on an interesting note as it involves an actor like Upendra. But the director disappoints by making it in an old-fashioned way. The film runs of expected lines and becomes very predictable. The betting mafia scenes are okay and Varun's hard work can be seen in the title song. The climax is also designed in a perfect way but the damage is done already. With the lack of commercial ingredients as well as the elements required for a sports drama, 'Ghani' definitely disappoints the moviegoers.

Every bit of Varun Tej's hard work can be seen on the big screen. He needs to be appreciated for the tremendous effort. He looked dashing when it comes to his physique and looks but his acting is quite regular. There are a few loopholes in the design of his character and Varun's performance did not cover them in any way. He did not showcase the necessary intensity that is required for this role.

Saiee Manjrekar disappoints both looks wise as well as acting wise. The love track is not designed properly and she is nowhere to be seen in the second half. Upendra did a good job but the role does not need an actor of his caliber. Suniel Shetty is okay while Jagapathi Babu looked routine despite having different shades in his role. He is sporting the same look in most of the movies which is appearing a bit monotonous. Nadhiya was convincing as Varun Tej's mother. Naveen Chandra is fine in a key role.

Based on Thaman's recent form, he delivered an underwhelming album as well as background music. Only the title song comes with us after walking out of the theatre. There is not a lot of scope for Thaman to show his ability except for the climax scenes. Visuals by George C Williams are very attractive. The production values are top-notch as the makers did not comprise at any point. Abburi Ravi shows his mark in a few scenes. Some deep and profound dialogues get lost in the predictable proceedings. While Kiran Korrapati excelled as a director, he disappoints as a writer. Screenplay turned out to be a big minus for this film. While he needs to be appreciated for not taking the commercial route, he failed to write a gripping screenplay for 'Ghani'.

Verdict: Ghani - Only Action, No Emotion