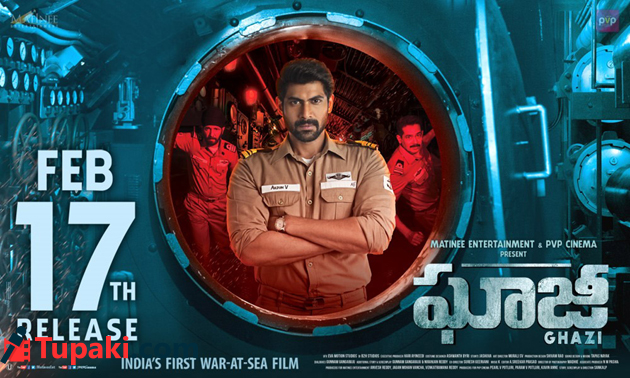 'Ghazi' is the first of its kind movie in India Cinema. Never been before a film with a backdrop of Naval Submarine War is being attempted by any of the Indian Filmmakers. Sankalp Reddy, a debutant director, took up the challenge of narrating a real-life incident which happened during the 1971 Indo-Pak war. Has the risk paid off?

In 1971, Pakistan Navy sends its best Submarine named Ghazi for the sake of its Soldiers who were fighting a war with Bangladesh. To reach the Bangladesh shores, Ghazi has to pass through the Indian Waters and destroy the Indian warship INS Vikranth. Upon receiving intelligence reports over the underwater attack, Indian Navy brings S-21 Submarine to foil the plan of Pakistan. As S-21 Commander Rann Vijay Singh (KK Menon) is short-tempered, Naval Officials assign the job of implementing their orders to Arjun Varma (Rana Daggubati). S-21 Submarine gets damaged in the process of counter-attacking Ghazi. What has the crew of S-21 done to overcome the situation & have an upper hand over Pak? Grab the tickets of 'Ghazi' to know more!

Rana Daggubati gave his career-best performance in 'Ghazi'. For essaying the role of a Naval Officer, He lost 15 kg of weight to attain a dignified look & took utmost care in the way he emotes. The settled performance given by him is a huge asset to the movie.

KK Menon yet again proves his calibre as an actor. Confrontation scenes of Rana and KK Menon stand out. They both carry the first half on their shoulders. Atul Kulkarni is first rate. Tapsee doesn't have much to contribute. Satyadev makes his presence felt with the intensity he maintained. Rahul Dev as Pak Submarine Commander does well. Om Puri, Nasser, Bharath Reddy and Priyadarsi have done a decent job.

More Drama could have been added

Technical Finesse of 'Ghazi' deserves a special mention. Background Score by K is in sync with the mood of the film and makes the audience involve throughout. Cinematography by Madhie gives a feeling of watching a real submarine. Art Work is splendid, not even once the viewer feel like watching a Submarine set. Visual Effects are marvelous. When compared to the budget, The output of 'Ghazi' makes everyone go speechless. All the technicians worked in tandem to create this path-breaking movie. Full Credit to PVP Cinemas & Matinee Entertainments for believing in the vision of a debutant director & producing in an uncompromising manner. Sankalp Reddy deserves all the praise for extensive research and extracting the best output from cast & crew. He seems to be the next big thing in Indian Film Industry.

'Ghazi' isn't a movie but a new kind of experience movie buffs can cherish all their lives. This Underwater War Drama takes the viewers to an altogether new World and makes them believe they are indeed in a Submarine. The thrilling underwater sequences in the Second Half are a must watch & can't be missed at any cost.

Technical brilliance of 'Ghazi' took the film to a whole new level. Thanks to the terrific co-ordination between all the Departments! With Crisp Editing, There is hardly any unnecessary scene in 2 hours 5 minutes Run Time. There is hardly any dull moment and audience were kept on the edge of their seats till the very end. 'Ghazi' succeeded in bringing a patriotic feeling among the viewers. Especially, They root for the Indian Navy in the last half-and-hour.

'Ghazi' had its share of drawbacks. First Half appears to be bit slow paced. More drama should have been added during the Climax where explosion of Ghazi is being showcased. Presence of too many Bollywood Actors & Lack of emotional connect is a concern. This isn't the kind of film for those who love watching films with commercial elements such as songs and masala.

A 70s backdrop movie based on Submarine War is possible Today only because of Sankalp Reddy. The kind of vision & clarity of thought he have as a Director is simply mind blowing. He has put in his heart & soul in the project, and made it exactly the way he wanted it to be. 'Ghazi' is a film which could have been an all-time classic if not for the few setbacks.