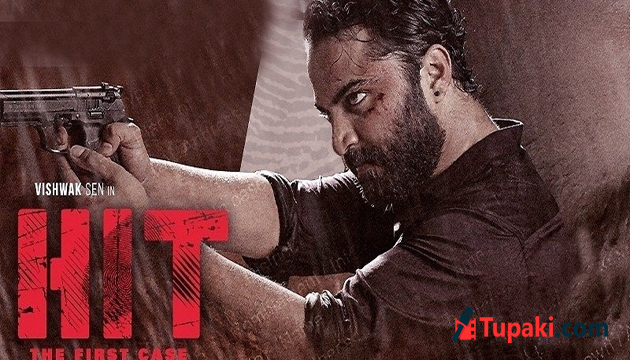 Vishwak Sen's mystery thriller 'HIT' released worldwide this Friday. Directed by Sailesh Kolanu and produced by Natural Star Nani, the film gained good pre-release buzz because of its interesting trailers. The entire team looked very confident on the film's output and let us take a look at how the film turned out.

Vikram (Vishwak) is a smart officer who works for HIT (Homicide Intervention Team). He suffers from post-traumatic stress but decides to continue in the department. His girlfriend Neha (Ruhani Sharma) works in the forensic's department. One day, he learns that Neha goes missing and decides to go looking after her despite his boss's orders to stay away from it.

While searching for Neha, he comes aross another missing case of a girl named Preeti. He predicts that there is some connection between them and tries to connects the dots. Can Vikram find Neha? What happens to Preethi? The answers to these questions form the rest of the story.

A smart and agressive police officer getting special case, finding some shocking facts and solving the case despite all the odds at the end. The is the story of almost every police film and Dr. Sailesh Kolanu's debut film 'HIT' also deals with the story of a missing girl case. The basic story has nothing new but what makes 'HIT' an edge-of-the-seat mystery thriller is its gripping narration.

The director smartly introduces the character of the protagonist and dives directly into the story. The screenplay may not be racy but it keeps you hooked as the hero tries to find clues about the missing case. It does not deviate from the main plot which worked in favour of the film.

The film runs smoothly without any sudden twists till the interval. The interal bang creates a sense of curiosity among the audience. The actual twists and turns begin to unravel in the latter half which keeps the viewers guessing. Aided by some terrific work from cinematographer and the music director, the second half is quite intriguing and climax twist along with the killer's backstory takes the audience by surprise.

On the flipside, the film is too urbane as the makers used a lot of English dialogues. Also, the makers took liberty with the usage of profainity as there are a lot of cuss words in the film which were muted. The director completely focused on the case and its investigation and left no space for commercial elements which is commendable but some people may get disappointed with it. Also, there were some unwanted twists in the second half which were kept for the element of surprise sake. As said before, the ultimate twist takes you by surprise but it may get mixed reactions from the public.

On the whole, 'HIT' is a thrilling film which definitely engages you despite its shortcomings because of its tight narration and technical brilliance. Fans of thriller genre will definitely enjoy this film.

Vishwak Sen did a good job as an officer who is calm but gets very aggressive at times. His subtle action during some scenes are worth applauding and his dialogue delivery added weight to his character. His physical appearance and body language may not be like your conventional hero but it suited character of Vikram perfectly.

Ruhani Sharma looked beautiful and did some intimate scenes with Vishwak. She did not have much to perform in this film. Murali Sharma did a fantastic job and the performance of person who did the role of hero's friend deserves a special mention.

Hariteja's character could have been etched better while Bhanuchandar and Brahmaji were apt in their roles.

The film is technically brilliant. The cinematography by Manikandan is just amazing. The dark tone and lighting he designed for this film is fantastic. The visuals suited the nature of the film and helped the director's vision. Music by Vivek Sagar is the film's biggest asset. His sound designing and background score takes the movie to another level. He even elevated some very normal scenes. He deserves an applause for his work. The editing is crisp though some scenes in the second half can be trimmed. The production values by Prasanti and Nani are good.

Coming to writer-director Sailesh Kolanu, he did a great job for a first timer. He wrote an interesting screenplay and was successful in converting it onscreen. Though the inspiration from Hollywood thrillers is clearly visible, his narration was good. He was able maintain the suspense and curiosity till the end but he limited the film's effect with the climax portions. Had he handled the second half in a more interesting manner, the film would have reached greater heights.

Verdict: A No Nonsense Thriller