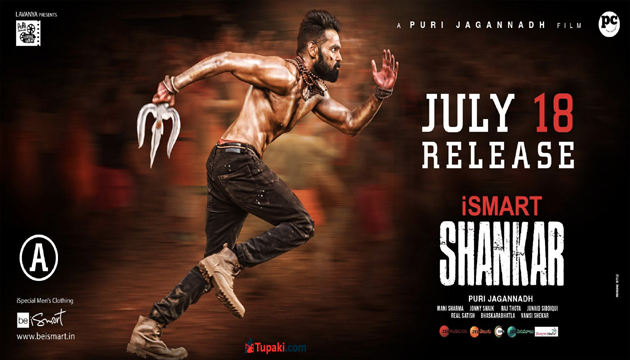 Puri Jagannath has done wonders at the Box Office whenever the characterisation of the protagonist hits the right chord with the movie buffs. Characterization of 'iSmart Shankar' looks as interesting as that of heroes in Badri, Idiot and Pokiri. Can the Crazy Filmmaker regain his lost glory with this Ram-starrer?

Shankar (Ram Pothineni) is an orphan in Hyderabad's Old City. He does settlements with the support of Kaka (Madhu) and ends up committing a murder believing it's a deal which could settle his life. Shankar not only gets trapped because of it but also loses his Lover. He escapes from the prison to take revenge on those who are behind the irreparable loss. Has he succeeded in his mission?

This is undoubtedly the best Mass Character in the career of Ram Pothineni. Puri Jagannath used to the energy levels of this Young Hero to the fullest. Makeover of Ram is the USP of 'iSmart Shankar'. He breathed life into the character and carried the movie on his shoulders throughout. Energetic Star is exceptional be it screen presence, dialogue delivery and dances. Watching him perform is like a feast once if you could connect with the character.

Nidhi Agarwal and Nabha Natesh competed with each other when it comes to glamour dose. Nabha Natesh irritates as a Warangal Lady. Dialogues uttered by her in the Telangana Slang looks artificial. Niddhi Agerwal received a better role than that of Nabha and she does well.

Satyadev hasn't got much scope to leave a mark of his own. Shayaji Shinde is too routine. Ashish Vidyarthi is just okay. Nothing much to say about the Actor who appeared as Main Antagonist.

Three Songs (Title Song, Dimaak Kharab, Bonalu) composed by Manisharma will thrill the Masses. However, Romantic Songs featuring Heroines are nothing special. Mani shows his mark with Background Score. Re-Recording provided by him in heroism-elevation scenes is marvelous. Camera Work by Raaj Thota is fine. Puri Connects maintained good Production Values. Puri Jagannath attempted an unusual concept but he messed up big time when it comes to screenplay. Some of the Dialogues penned by him will be remembered for a long time but he need to rethink on showing lust in the name of love and using too many double meaning one-liners. Puri should have done the script work in a much better manner.

A Chip containing memories of other person gets inserted into the head of the Protagonist and that is why he acts in an unusual manner. While he behaves like himself at one point, Transforms like a completely new person in a flash. Watching 'iSmart Shankar' gives a feeling whether if a chip was inserted in Puri's head in a similar manner? Why because, You could see Puri-mark Taking, Hero Elevation and Eccentric Moments in bits & parts. Just when the viewers start believing that Puri is back, He makes them realise that nothing much has changed from what they had seen in him in the recent years.

Attempting a scientific thriller, Puri Jagannath incorporated ample commercial and heroism elevating elements but failed to present the concept in a convincing manner. Ram behaves like two different persons because of the chip inserted in his head. An out & out Mass Guy speaking Posh English and Presenting himself as a CBI Officer looks unconvincing. The manner in which Puri handled such scenes shows the significant drop in his standards.

Of course, The Chip Idea is something that's really interesting. Had if Puri didn't defy logic, 'iSmart Shankar' could have been at a different level. Lack of logic in the scenes makes them look very silly. Even the episode revolving around Murder Mystery wasn't dealt properly. It's high time Puri learns something from Thriller such as 'Goodachari' and 'Agent Sai Srinivasa Athreya'.

First Half is entertaining with iSmart Shankar Characterization, Ram's One Man Show and Puri-Mark Dialogues. Even the picturization of songs with full of energy was good. Puri fumbled when it comes to narrating the story in the Second Half. Youth and Masses might appreciate the romantic track filled with glam dose and double meaning dialogues but they don't connect when hero is in pain as there was only lust no love. Climax of the the movie aimed at offering an emotional high to the masses is tad too routine.

Bottom Line: A Feast For Masses BUT..!