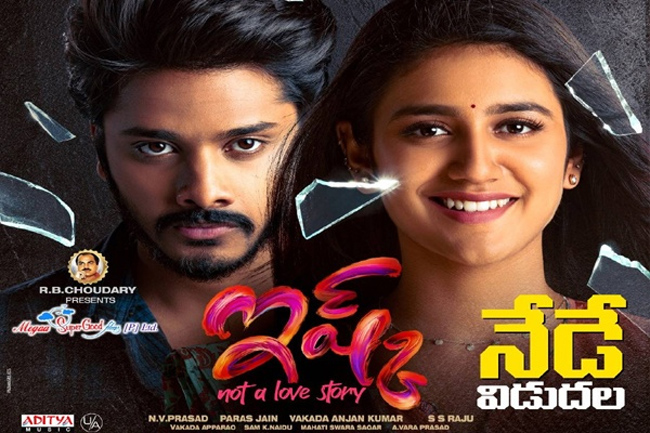 Young hero Teja Sajja who earned a name of himself with 'Zombie Reddy' has come up with his second film name 'Ishq' as the lead. Wink girl Priya Prakash Varrier is the heroine for this romantic thriller which was made by debutant SS Raju. Megaa Super Good Films banner has bankrolled this interesting film which has hit the screens this Friday. Let us dive into the review to know more about it.

Siddhu (Teja Sajja) is a youngster who completes his studies and working as a software engineer. He is in love with Anu (Priya Prakash Varrier) who stays in the hostel and pursues her studies. Siddhu attempts to please Anu by spending the entire day of her and make her birthday special. He takes Anu on a long drive but when they are spending some time alone Madhav (Ravindra Vijay) terrifies them by coming to them as a police officer. What happens after that? How many turns will be film take due to this? All these questions will be answered on the big screens near you.

The Malayalam film industry is known for interesting and compelling stories based on the people we regularly see around us or situations we generally face. They used some relatable content and come up with an intriguing point that catches the attention of everyone. People often get surprised with the original and novel stories they turn up with. But we get a doubt whether our audience encourage such different content or not which limits the imagination of most of our writers and directors.

But the situation has changed a lot in the past few years and our filmmakers are remaking a lot of Malayalam films that have unique stories. 'Ishq - Not A Love Story' is one such remake and as the title suggests, it is about love and romance. It revolves around a couple who are in love. It gives you the feeling of a love story at the beginning but some unexpected twists arrive which takes the audience by surprise and thrills them. Keeping the comparisons with the original film aside, the movie failed engage the audience completely for two hours. Dragging out a small point to an extreme length test the patience of the audience at times.

The film takes digs at the persons, society and media who harass the young couples in the names of moral policing. It tries to shed the light on how wrong it is to disturb the lives of boys and girls who are ready to get married and are in love. The movie shows how the girl and the boy get affected personally when a person takes advantage of the situation and also projects what happens when the victims decide to take revenge on such kinds of people. This point seems interesting but the screenplay laced around it over 90 minutes is where the problem lies. The film starts off with the love track which is enjoyable and goes on for thirty minutes. The villain makes an entry just when things start to work out perfectly for the couple and the scenes involving how he poses as the police and threatens with cases run for 30 minutes. People who begin with hoping that hero and heroine would get out of this situation becomes impatient after some time and wait for this episode to end.

The same kind of situation arises in the second half too where the hero goes to the villain's house. Though it raises interest at the beginning, it gets dragged a lot. Despite an impressive point and message, the lengthy and lethargic narration brings a lot of negativity. While the film may have become successful in Malayalam but their taste is quite different from the regular Telugu audience. Though we are encouraging experiments, they should be delivered in an engaging and entertaining manner. Mainly, the audience expect pacy narration which went completely missing in 'Ishq'. Despite not changing the original content much, the intensity went completely missing. The viewers might feel that they have watched a different movie but it is not a satisfying experience.

Compared to his last two films, Teja Sajja was given a lot of scope to perform and showcase his acting abilities in this movie. Since the film involves only three main characters and the makers mostly used close-up shots, Teja made full use of the opportunity. He gave a good performance despite appearing a bit ordinary in the first 20 minutes. He did well in the emotional scenes during the first half and while torturing the villain's family in the second half. He did okay in the scenes that required him to show his negative angle.

Priya Prakash Varrier is strictly okay in the expressions department. She doesn't have a wide range of emotions to display and there is no scope for glamour show in this movie. 'Uma Maheshwara Ugra Rupasya' fame Ravindra Vijay was decent in the negative role given to him. He pales in comparison with the actor who played this role in the original. The actress who played his wife has impressed big time and there are not many other notable characters.

Mahati Swara Sagar's music is adequate. The Sid Sriram's song sounds attractive and he tried to increase the intensity in some scenes with his background scores. Sam K Naidu's cinematography is fine and the production values are as required for the story. Director SS Raju has put 'Adaption' in the credits above his name but the people who watched the original can say that it is almost a frame-to-frame remake. The completely different story is both the movie's advantage and disadvantage. The director did not try to hide the loopholes in the original and failed to narrate 'Ishq' on an interesting note.

Verdict: Ishq - Not An Engaging Story