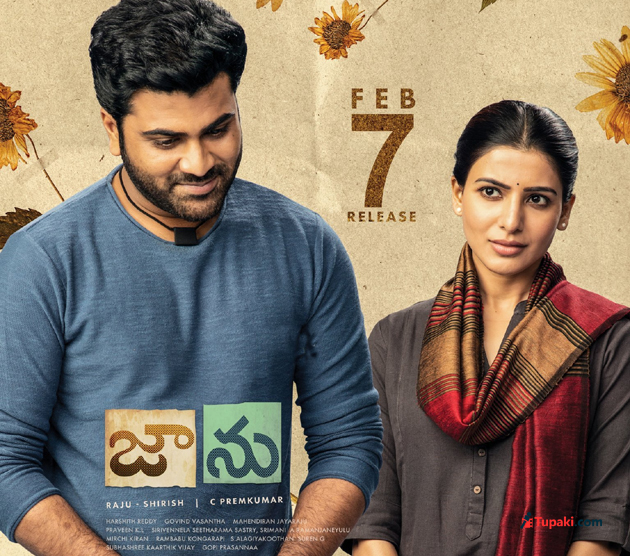 Tamil film '96' is considered as a classic and Dil Raju decided to remake it as 'Jaanu' in Telugu. Starring Samantha and Sharwanand in the lead, C. Prem Kumar who directed the original handled this remake too. After an impressive trailer, the film is getting released today amidst good expectations. Let us see if 'Jaanu' matched up with its original or not.

Ram (Sharwanand) is a travel photographer who leads a decent but unhappy life. All his school mates plan a reunion and he sees his childhood love Jaanu (Samantha) there which makes him revisit his past. They both loved each other during their school days but Ram unexpectedly shifts to Hyderabad. What will Ram and Jaanu do when they meet after all these years? What happens to their unfinished love story? All these questions will be answered on the big screens near you.

Remaking a film which is already considered as a classic is very tough. The film fails badly even if one step goes wrong. That is why many filmmakers avoid remaking memorable films. But Dil Raju and his team dared to remake a film like '96'. The Tamil film had a lot of odds. There is nothing new in the story, the film runs at a snail pace and it doesn't have appealing visuals. It is the masterclass writing and brilliant performances from Vijay Sethupati and Trisha that connected to everyone.

Everyone was sceptical about this remake wondering whether Sharwanand and Samantha could recreate the magic of original cast or not. Though we cannot say that they matched the level of Tamil cast, once can confidently claim that they did a great job in not spoiling the feel. Films like 'Jaanu' run solely on the chemistry between the lead pair and their acting prowess. Sharwa and Sam did an exceptional job in this aspect. The complete second-half runs only on the lead pair and they pulled it off quite convincingly.

One of the biggest assets of this film are the childhood episodes. The writers did a wonderful job in penning those scenes and it laid a strong foundation for the adult portions. Those scenes engage the audience in the first half and gives you a nostalgic feel. The film is filled with light-hearted moments along with some soul stirring emotional episodes and the makers struck a fine balance between them. 'Jaanu' will definitely touch your hearts and haunts you if you did not watch the original. If you did, you will be happy that the remake didn't spoil the essence.

On the flip side, the film does not appeal universally. It is a classy film and the makers deliberately avoided adding commercial elements in order to protect the feel and emotion in this film. The pace of the film is very slow during the latter parts of second half. Despite the best efforts from everyone, the film falls a step behind the original and there is nothing much to do about it. The sudden ending suits the narration but some may not digest it.

'Jaanu' is another feather in Sharwanand's cap. The actor once again picks up a challenging role and gives a matured performance. He did exceptionally well in the emotional scenes and also provided a bit of comic relief at times. The way he emotes just through his eyes speak volumes about his potential.

Samantha is a perfect fit for the role of 'Jaanu'. She looked simple and elegant and acted brilliantly during the second half. Her performance in applause-worthy in certain scenes. The chemistry between the lead pair is adorable.

The actors who did the younger versions of Sharwa and Sam were equally good. Especially Gouri who played the role of young 'Jaanu' looked beautiful and did a great job. Actors like Vennela Kishore, Ramesh and others did a decent job.

Dil Raju did not spend heavily on this film but gave what is necessary. The camera work by Mahendiran is fantastic. He kept the visuals as simple as possible to suit the narration. There are a lot of steady shots in this film. Editing is adequate and so is the artwork. Music by Govind Vasantha is the biggest asset as they elevated the proceedings drastically. Songs blended well into the narration. Dialogues were okay and dubbing by Chinmayi for Samantha needs a special mention.

Director Prem Kumar stayed true to his original film and did not try to change it. He did what is necessary and was successful in keeping the feel of the film intact. He did a sincere job in both writing and directing.

Verdict: A Sincere And Soulful Remake