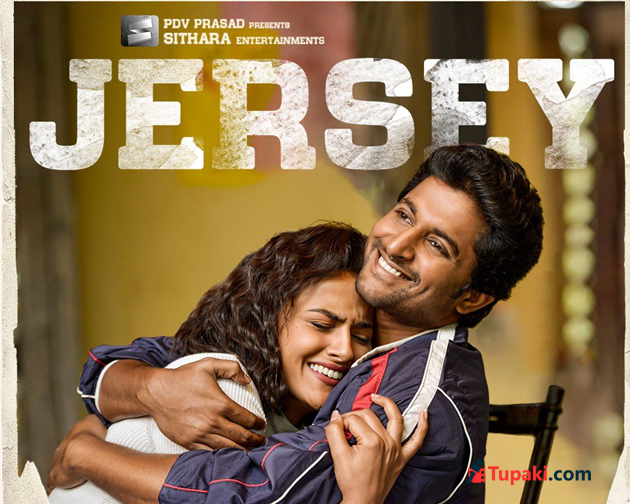 Expectations on 'Jersey' grew multi-fold post the release of Theatrical Trailer and with the confidence exuded by Nani during the pre-release promotions. There is tremendous positive buzz even though Gowtam Tinnanuri of 'Malli Raava' fame is yet to prove his mettle. How far 'Jersey' is able to meet the hype?

Arjun (Nani) is a promising cricketer who aspires to play for the country but his dream get ruined due to some unavoidable circumstances. He keeps on feeling the pain of not being able to reach greater heights inspite of having talent & getting branded as a loser makes him depressed. 10 Years after bidding goodbye to the sport, Arjun receives the motivation to make a re-entry into cricket at the age of 36. What prompted him to take such a decision at retirement age? Has he fulfilled his dream at least in the final attempt? Watch 'Jersey' to know more..!

Nani delivered his career-best performance in 'Jersey'. By breathing life into the character, This Brilliant Performer makes you connect with what he is going through from start to finish. Viewers could feel the pain of Arjun and that's the beauty. He just excelled in each & every scene. You just can't imagine any other Actor in this role after watching the movie.

Shraddha Srinath made a promising debut in Tollywood playing Sara. This 'U-Turn' Actress might be just okay when it comes to looks, but she is a very good performer.

Sathyaraj utilised his vast experience to leave an impact of his own as a Coach. Master Ronith who played the role of Nani's Son will be remembered for a very long time. Rest of the Actors have done justice to their roles.

Outcome will be at a different level if Music Director and Cinematographer understand the depth of the emotions in a story. That's what happened with 'Jersey'! Contributions from Anirudh Ravichander and Sanu Varghese are marvellous to say the least. Songs composed by Anirudh have already become chartbusters and they were blended so well in the story. Not to forget about his Background Score which is a huge asset for this movie. Camera Work by Sanu Varghese gives a feeling of watching a classic. Hats off to the Producer for taking up a sports-backdrop flick and pushing the limits. Gowtham Tinnanuri made people realise that he is here to stay for a long time with 'Jersey'. He showed his range as a Writer & Director by making this flick on par with international standards.

Films with Sports-Backdrop does wonders at the Box Office if they are dealt properly. We have seen that happen with 'Lagaan', 'Chak De India' and 'Dangal'. In Telugu, Sports-Dramas were made very rarely. For some reason, Tollywood Stars had always hesitated to take up such subjects. Nani is here to change that with 'Jersey' which will remain as a memorable sports-based film ever made in TFI.

Maintaining Authenticity is very crucial for a Sports-Backdrop Flick because the viewers have to believe that the protagonist is a real sportsperson to connect with the character. Gowtham Tinnanuri has done extensive research on Cricket, be it from Player point of view or Coach point of view or Management point of view. The whole story of 'Jersey' revolves around cricket. Be it love story or father-son bond, Everything is inter-related to this sport.

'Jersey' is an emotional journey of a cricketer and the role of Arjun is the strength of this movie. What a passionate cricketer goes through after failing to reach the goal was presented in a heart-touching manner. Casting someone like Nani for such a well-etched character is a no brainer. Natural Star is capable of making even an ordinary role look loveable. Imagine what he could do if it's a wonderful character. The manner in which Father-Son bonding was elevated moves everyone emotionally. Emotional Thread offering justification to the 'Jersey' Title is a major highlight.

Though the film is mostly in a serious tone, Connecting with the characters makes it an emotional roller coaster ride. 'Jersey' doesn't end like any other sports-backdrop flick and that's what makes it really special. Of course, Slow Pace, Predictability at times and Few Cinematic Liberties are evident but most of the film is very realistic. Showing Ranji Matches in a Day & Night set-up is a major complaint. Climax of 'Jersey' overshadows all of these short-comings to emerge as a winner.

Bottom Line: A Must Watch!