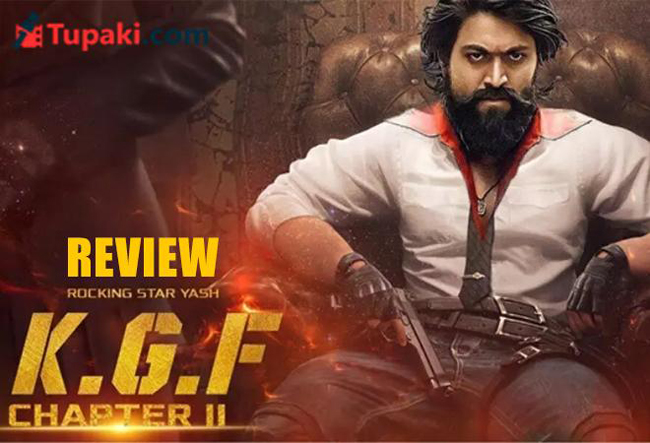 With the euphoria of 'RRR' slowly coming down, the next big pan-Indian release is here. Kannada hero Rocking star Yash who took the nation by surprise with 'KGF Chapter 1' in 2018 is finally arriving with the second chapter. 'KGF Chapter 2' is directed by Prasanth Neel who has turned into a star director with the 'KGF' franchise. The film was postponed multiple times before hitting the screens today. The expectations are sky high over this film and the trailer got a phenomenal response. The songs and posters added to the hype too. The film's cast involves Bollywood biggies like Raveena Tandon and Sanjay Dutt who are playing crucial roles. With an impressive cast and stellar technicians, the hype is at an all-time high. Let us dive into the review straight away and find out how the film turned out.

With Rocky (Yash) killing Garuda at the first part, the men who sent Rocky think that 'KGF' will completely be under their control. But they soon realize that Rocky is set to take over 'KGF' and he is treated as a god amongst the people who were suppressed by Garuda all these years. With their help, Rocky becomes a huge public personality and turns untouchable. But Rocky needs to face Garuda's uncle Adheera (Sanjay Dutt) and politician Ramika Sen (Raveena Tandon) who tries to control him in order to stay at the top. How Rocky challenges these super powers and how far his journey goes forms the rest of the story.

Yash is an unknown hero to the Telugu audience. Prasanth Neel is a name that no one heard. They both gave us 'KGF' which received a grand reception all over. The Telugu audience treated Rocky as an iconic character and Yash got whistles in theatres just like a star hero from our industry usually gets. The heroism elevation scenes in 'KGF' were just outstanding that the Telugu audience who are used to heavy mass scenes, action episodes and elevations were also stunned by Prasanth Neel's taking. It redefined the word mass and the film created a sensation all over the country. But are the hero elevations and high-octane action sequences enough for the movie to succeed? No.

People connected with the character of Rocky. His story touched everyone which is why people cheered his every action. The emotional thread of a son and his mother, her dialogues and others set the stage perfectly for Rocky to go all out and achieve his goals no matter what. It was an emotional journey. In the midst of all these emotions and layers, the top-notch visuals, background scores and action episodes have the audience a never-before visual experience. Compared to 'KGF 1', the second chapter is a couple of steps above in terms of visual extravaganza and presentation. But the strong story and emotions in the first part went missing here. The conflict point is not strong enough. While it is sure that 'KGF 2' is not at the level of 'KGF 1', the second part cannot be dismissed easily.

At the end of the first chapter, Ananth Nag's character says that the main story begins now which makes people expect that the main conflict and drama will be presented perfectly in the second chapter. But the story is the biggest minus in this film. The turns, tight screenplay, establishment of characters and other necessary elements are not present in the second chapter. Everything was a surprise in the first part but the second arrived under a lot of expectations. The first part had repeat value due to the 'KGF' world and surprises for the audience. We wonder what Prasanth and Yash offer us in 'KGF - 2' in terms of story and challenges for Rocky.

At one end you have Adheera who is hell-bent on taking over the 'KGF' throne from Rocky and politician Ramika Sen wants to stop Rocky from getting too powerful on the other end. This raises a lot of curiosity and interest among the viewers but they are confined to build up scenes. Sanjay Dutt's look is quite menacing but his character doesn't leave the same impact as Garuda did. He is restricted to three scenes where he shoots the hero, gets beat up at the hands of the hero and finally gets killed at the hands of the hero. Coming to Raveena Tandon, it is all hype and overaction. At one point, you wonder why she is a part of this movie. You even get disappointed with Rocky's character as he doesn't look active like he did in the first part.

There is nothing new when it comes to the story of 'KGF - 2'. The journey of a nobody to the king of 'KGF' makes the first part a worth watching but there is nothing interesting in 'KGF - 2'. We get a high while Rocky takes over 'KGF' but how he expands his empire is not shown in an interesting manner. But there are a few scenes that are on another level in the second chapter. They give a never-before feeling to the audience and Prasanth Neel showcases his brilliance here. The jaw-dropping action sequences and some mass scenes make 'KGF 2' a one-time watch.

Rocky has already turned into an iconic character. Yash continued the same intensity in the second chapter too. His looks and style are very attractive. He did full justice to his role. Srinidhi Shetty has nothing to do just as expected. As said before, Sanjay Dutt impresses heavily with his look but he had nothing else to do. His character is not etched properly. Raveena Tandon goes overboard in her character. Rao Ramesh is decent as a CBI officer and he too looked artificial at times. Prakash Raj did well as the narrator. The rest of the cast are adequate.

The film is flawless when it comes to technical quality. Ravi Basrur gave a thumping background score and songs. He tried his best to elevate each and every scene though it was a bit loud at times. Bhuvan Gowda's camera work is phenomenal. He knows what Prasanth Neel needs and delivered it brilliantly. Visuals stand out in the film. Homebale Films did a great job when it comes to spending money on this movie. Prasanth Neel proved his worth as a director once again and his vision is quite epic. But he failed as a writer in this film as he should have spent more time on the story and screenplay. He focused more on elevations which went against the film.

'KGF-2': No Emotion, Only Elevation