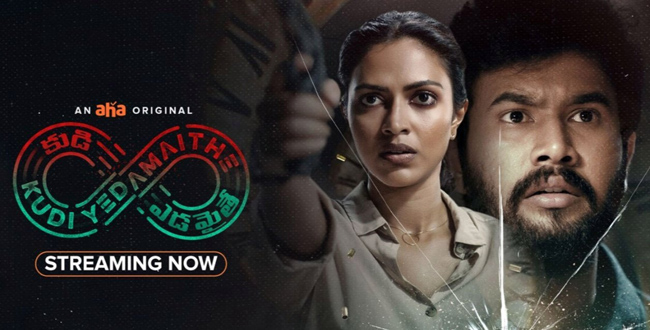 Compared to other languages, the original OTT content in Telugu is very less. There are not many films and web series with original content that impressed our audience. But the Telugu OTT platform 'Aha' is trying to provide us with some quality content with good technical values. They have come up with 'Kudi Yedamaithe' recently which is directed by Pawan Kumar. This director created a sensation in Kannada film industry with films like 'Lucia' and 'U Turn'. The trailer of this web series looked very promising with interesting twists and turns. Let us dive into the review to find out if it reached those expectations or not.

Aadi (Rahul Vijay) is a pizza delivery boy in Hyderabad while Durga (Amala Paul) is a CI at Khairtabad police station. One day, some interesting and unexpected things happen in their life and both of them die at the end of the day in an accident. But they wake up alive the next day and everything looks normal. Things that happened on the day of their accident keep happening on a loop and they are stuck on that particular day. Before the day of the accident, a boy and a girl get kidnapped and Aadi's friend loses his life. So, Aadi and Durga decide to prevent these things from happening and how far they become successful? Why is this happening to them? What is the connection between the two of them? And other such questions will be answered when you watch the entire web series.

The first thing which comes to our mind when we listen to the story is a lot of Hollywood films that come to our mind. Web series which are made on such illogical lines should be narrated in a very convincing manner. If not, the audience may feel out-of-place right after the first five minutes. But Pawan Kumar seems to have a knack of handling such subjects as he scored hits like 'Lucia' and 'U Turn' which had similar concepts. He is known for selecting such tough subjects and he did the same for his maiden web series too. 'Kudi Yedamaithe' which was made on the time loop concept is sure to confuse the audience but also gives them a unique experience. Since it is an out-of-the-box concept, the audience shouldn't think too much about how can it happen but rather focus on what happens next. It may take some time to get used to this new concept and the series may bore you at times but the team was successful in raising the curiosity and sustaining the interest among the audience till the very end.

'Kudi Yedamaithe' begins on a regular note with makers showcasing the daily routine of pizza delivery boy Aadi and CI Durga. But it takes a turn when the day passes and the exact things start to happen again. It grabs the attention of the audience and despite some initial hiccups in handling this multi-layered concept, the director successfully managed to engage the audience. If this had been a movie, the director would have made the proceedings run a bit quicker and chop off some scenes on the editing table but he took his own sweet time as it is a web series. In order to establish the time loop concept, the director presented the same scenes again and again which appear too repetitive. The viewers may not know where this series is headed in the middle portions. Two episodes in the middle may test the patience of the audience.

But things that appeared quite dull take a sudden turn when both Aadi and Durga realize that they are facing the same situation. The series gets interesting after they start helping out each other and start finding out the secrets. Also, their attempts at stopping the unfortunate incidents create a lot of curiosity and suspense among the audience. The last three episodes have been dealt supremely and the director ties all the loose ends perfectly. The audience gets thrilled a lot in the final episode and Pawan Kumar needs to be commended for that. The kidnap racket thread was also handled in a decent manner.

On the whole, 'Kudi Yedamaithe' starts off normally and bores you in the middle but things get interesting as they go on. The director did a fantastic job in the last couple of episodes and gives a perfect ending. The thrills and twists he promised in the trailer will be definitely delivered to the movie/web series lovers. Though some portions could've been sharpened a little, people who love new and innovative concept will definitely enjoy this intriguing ride. The makers should be appreciated for coming up with such creative and captivating content.

Both Amala Paul and Rahul Vijay did a great job. While the Tamil audience knows her potential, it is nice to see Amala Paul in such a different role compared to the regular heroine roles she did here. She suited the role of a police officer and looked quite mature. Rahul Vijay owned the character and at ease in most parts of the web series. He might be a budding artist but acted with a lot of confidence. The rest of the character artists did a good job too and helped in bringing the necessary impact.

The background score is very compelling and increases the interest of the audience. Thrillers need an impressive background score and 'Kudi Yedamaithe' definitely had that. The cinematography suited well to the theme of the web series. The moody lighting and dark tones used created a lot of impact. Editing is quite good but some portions in the middle may test the patience of the audience. Production values are very compared when compared with other Telugu original content that came out in the past couple of months.

Directed Pawan Kumar once again proved his expertise in handling such interesting concepts. He managed to pass the web series test with flying colours. Despite a few hurdles, 'Kudi Yedamaithe' makes an interesting watch this weekend.

The last twist regarding Amala Paul's character might hint towards a possible second season. It will definitely be an encouraging sign to the team if the audience show interest in the second season.