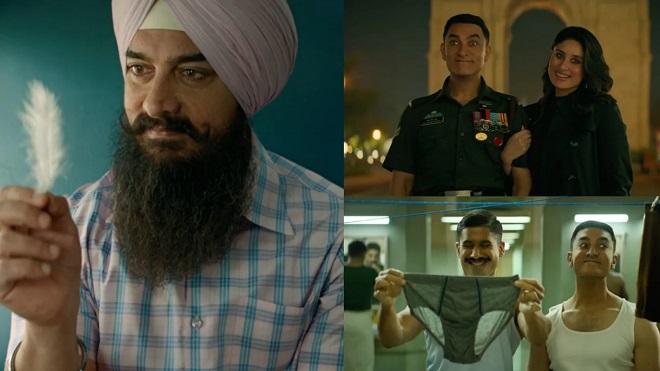 
Considered as Mr. Perfectionist, Aamir Khan made some evergreen movies like '3 Idiots', 'Lagaan', 'Dangal', 'PK', 'Taare Zameen Par' and others. He is known for taking care of every minute detail in his films and this is why his films are in production for a long time. After a debacle like 'Thugs Of Hindustan', he decided to come up with an Indian adaptation of the Hollywood classic 'Forrest Gump' which came in 1994. Naga Chaitanya played a key role in it which increased the film's buzz among the Telugu audience too. With all the controversies surrounding Aamir and 'Laal Singh Chadda', the movie was finally released today and let us see if it managed to impress the audience or not.

Laal Singh Chadda (Aamir Khan) lost his father in childhood and grows up under the protection of his mother (Mona Singh). He is a bit mentally challenged but manages life with the help of his mother and childhood friend Roopa (Kareena Kapoor Khan). He grows up and joins the military where he forms a friendship with Balaraju (Naga Chaitanya). But all the people who are close to Laal goes away from his life. How he manages to go on with his life without the help of his dear ones forms the rest of the film.

There was a time when remakes were considered an easy way to success. But it has become the biggest challenge for any filmmaker nowadays. Thanks to globalization and the explosion of OTT platforms, people are watching every movie across the globe with the help of subtitles. If the news of a remake comes out, they are watching the original version immediately. They are calling it a Xerox if they remade it as it is. They claim that the makers spoiled the original version if they tried to make some changes to it. Due to this, impressing the audience with a remake has become a very tough task.

Despite all that, Aamir Khan selected a Hollywood film that came out in 1994 and decided to adopt it in Hindi as 'Laal Singh Chadda'. Knowing the talent and perfection of Aamir, people were interested in seeing this film. Everyone hoped Aamir would create some magic along with his team. Shockingly, it is Aamir Khan who turned out to be the biggest weakness in the movie. His antics looked artificial and the purity of 'Forrest Gump' went totally missing in 'Laal Singh Chadda'.

Aamir is known for his measured acting and owning the character so much that it becomes tough for people to imagine anyone else in it. He makes you connect with the character and touch our emotional chords most of the time. But it did not happen in 'Laal Singh Chadda' as his unnatural acting often irks the audience. The sympathy you get towards Tom Hanks in 'Forrest Gump' is what made it so successful. But that is not what happens with 'Laal Singh Chadda' and Aamir's performance is to blame for that. His acting is not at all natural which worked against the movie. His expressions as a mentally challenged person go over the top and we never form a bond with his character. Also, there is a lack of originality in his attempt. His behavior in this flick resembles his own Samar character in 'Dhoom 3' and his alien character in 'PK'. Due to this, the novelty and freshness go missing.

On the story front, 'Forrest Gump' is not very strong and it is also 28 years old. A lot of inspirations were drawn from this movie already. We have seen a lot of films that showcase the various stages of a person's life in a heartwarming manner. The slice-of-life genre is not new to the viewer now and everything depends on whether the hero character manages to connect with the audience or not. Sadly, it didn't happen for 'Laal Singh Chadda'. His performance failed to touch the hearts and some of his antics brought laughs even in emotional scenes. Barring a few portions, the film has nothing special to offer. Writer Atul Kulkarni worked very hard on the changes in the original to suit the Indian nativity. The movie starts in the 80s and touched upon issues like Amritsar attacks, India winning world cup in 1983, Indira Gandhi's murder, Advani's Ratha Yatra and others in order to showcase the hero's journey. There are a few funny touches too in this film where they say that Shah Rukh's trademark style was given by Laal Singh Chadda and others.

While these scenes are okay, there were some scenes that raise a few questions. In the original, we see the soldier saving the Commander while they changed the scene here. It is shown as a soldier saving a terrorist and the latter getting reformed after that. We all know the hate for this film among a few sections of people. Having such scenes may infuriate them further.

Keeping it aside, there are not many scenes that make you glued to your seats. Even the Kargil episode is shown in a very regular way. Coming to Balaraju's character, it fails to reach the expectations. They tried to imitate the mannerisms of the actor in the original but it looked very artificial. Chaitanya's role is not as impactful as expected. Another misfit in this film is Kareena Kapoor. She did not suit the role of a teenager at all as she has crossed forty now. Despite her good acting skills, she fails to engage the audience. With the main characters failing to leave an impact and the screenplay lacking any high points, 'Laal Singh Chadda' turns unbearable after a certain point. It tested the patience of the viewers by the end.

There are no roles that were destroyed by Aamir till date but 'Lal Singh Chadda' is an exception. He tried to do something different but it backfired badly. His looks and acting lacked freshness. It is going to be a bitter pill to swallow for his fans.

Kareena Kapoor is the wrong choice for Rupa's character. Despite her best efforts, her role fails to impress. Naga Chaitanya did not have a strong impact as everyone expected. The film did not benefit from his presence nor did he benefit from being in such a huge project. Mona Singh as the hero's mother is okay and the rest of the actors are fine.

'Laal Singh Chadda' had a strong technical backing. Pritam's songs are very good and the lyrics are fantastic. Tanuj's background score is equally good and Satyajit Pandey's visuals are amazing. The soul of the movie is perfectly captured by the director of photography. The production values are top notch and they did not compromise on anything. Writer Atul Kulkarni did a very good job in giving an Indian backdrop to 'Forrest Gump' story. Advait failed in the casting stage itself and he failed to make his mark. Since it is an Aamir Khan film, he will be taking the lion's share of the blame for its failure.