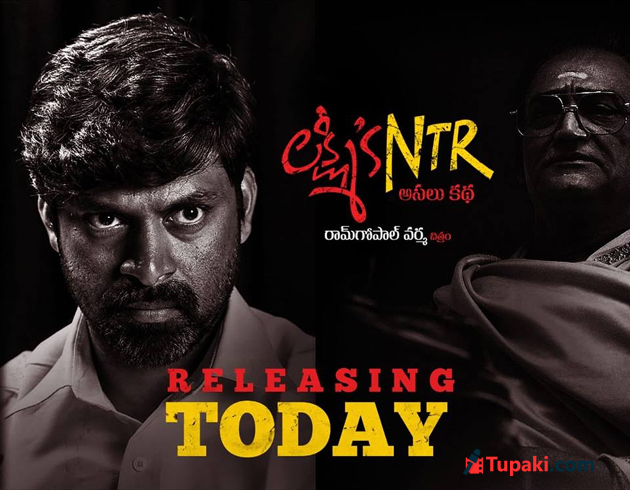 Neither 'NTR Kathanayakudu' nor 'NTR Mahanayakudu' covered the crucial phase in the life of NT Rama Rao. Ram Gopal Varma took this as an opportunity to make Lakshmi's NTR. This controversial flick released Today. Let's see whether if he presented the sensational incidents which happened in the 90s in an authentic manner or not...

Vijay Kumar who essayed NTR's Role is alright. Though his expressions are okay, He is no match to NTR and even the voice appears artificial.

Sritej excelled in the role of Chandrababu Naidu. He showcased the cunningness in the character quite well. Movie Buffs will thoroughly enjoy his performance in the Second Half.

Yagna Shetty is impressive as Lakshmi Parvathi. Even the Actor who essayed the character of Mohan Babu did well. Rest of the Actors failed to leave a mark of their own.

Songs composed by Kalyani Malik are good. 'Nuvve Na Sarvaswam' song sung by SP Balu is worth a special mention. Background Score is very nice, especially the re-recording for CBN's role and Backstabbing Episode. Cinematography by Rami is okay. Production Values are below par. Viewers get the feeling of watching B-Grade Film at times. Dialogues were well-written in the second half. Neither Varma nor Agastya left a mark of their own with Direction. Of course, Lakshmi's NTR appears to be far better than RGV's recent disasters. He, however, failed to narrate the controversial subject in a gripping manner.

Making NTR Biopic without Marriage with Lakshmi Parvathi, Backstabbing Episode and Death is like an incomplete exercise. Still, Both Krish and Balakrishna avoided them conveniently by narrating the story from the angle of Basavatarakam. This is one of the major reasons behind the lack of curiosity among public on 'Kathanayakudu' and 'Mahanayakudu'. RGV hasn't made such a mistake. He decided to make a biopic which covers how Lakshmi Parvathi came into NTR's Life and what happened thereafter. Lakshmi's NTR is more like a continuation of the two parts featuring Balakrishna.

One must say that there are more twists n turns in Lakshmi's NTR than 'Kathanayakudu' and 'Mahanayakudu'. Varma, however, failed to make the most out of the golden opportunity. Opting for a biased approach, Lack of command on the Direction and Poor production values worked against the movie.

An attempt was made to project Lakshmi Parvathi as an innocent and as if she never interfered in the matters of Telugu Desam Party. That shows the intention of the Makers, but whether people are gonna accept it! First Half of Lakshmi's NTR is more like a mix Love Story & Family Drama. Varma tried his best to establish the relationship between NTR and Lakshmi Parvathi here rather than touching politics. So, The proceedings aren't interesting and even slow pace acts as a spoiler.

Focus is on how NTR was backstabbed in the Second Half. Pace picks up when the conspiracy to dethrone NTR from power unfolds. Varma maintained the right intensity while presenting the role of Babu. Viceroy Episode was pictured in an emotional manner. Sadly, The film falls flat in the last half-an-hour as Varma drags the scenes instead of ending the story on a sharp note. Chandrababu Naidu and Nandamuri Family Members have been showed in bad light in the movie. He, however, failed to present those scenes affectively and even the casting has gone terribly wrong. Many sequences remind us of TV Serials with melodrama due to dismal production values. Overall, RGV choose the right subject but failed in presentation part.