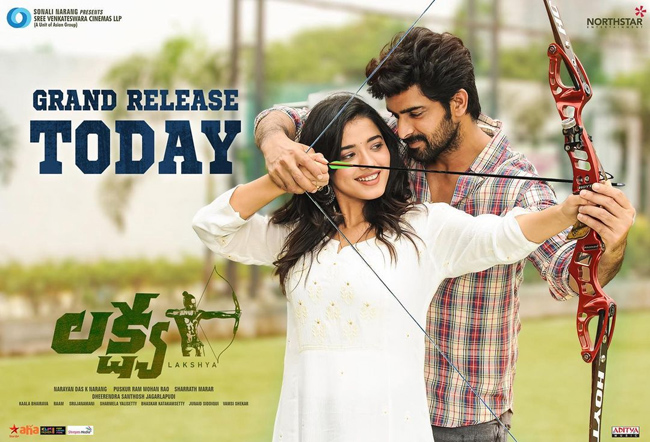 Young and handsome hero Naga Shaurya has been waiting for a hit for the past few years. After 'Varudu Kavalenu', he has now arrived with a sports drama titled 'Lakshya'. The makers picked Archery as the backdrop for this film and the promos have created a decent buzz. Let us dive into the review right away.

Parthu (Naga Shaurya) is an archer who is encouraged by his grandfather (Sachin Khedekar) in practicing this sport. While Parthu is on his way to becoming an international athlete, the death of his grandfather affects him quite badly. During this time, Parthu's rival Rahul (Shatru) gets him habituated to drugs which damaged his career. Parthu fails in the tryouts for the Olympics and his usage of drugs comes out in the media. He goes down completely both on the professional and personal fronts. His life takes a turn due to a person and how he rejuvenates his life and becomes successful forms the rest of the story.

During the interviews, Naga Shaurya said that 'Sye' inspired him to act in 'Lakshya'. As we know, Rajamouli explored a completely new game in 'Sye' and despite not knowing anything about Rugby, people connected with emotions. He even took care of the minute details when it comes to the game and it is still a favorite to many. It is a benchmark when it comes to making a sports drama on a not-so-popular sport.

Seems like Shaurya got the inspiration from 'Sye' but not his director Santosh Jagarlapudi. Archery is not a popular sport in this country and it is not embraced by the masses. So, a lot depends on the story woven around the sport but the director failed to narrate a compelling story through 'Lakshya'. This film treads the path of many sports dramas that were made before and offers nothing new. The drama built in the movie is not engaging enough.

The screenplay can be narrated in different ways but every sports drama has a common core whether it is Bollywood or Tollywood. The hero excels in the sport which he likes immensely but his journey hits a roadblock in the middle. How he finds inspiration to move forward and become successful in the game forms the second half. 'Lakshya' follows the same path but touching on Archery brings a bit of freshness to this film.

It is clear that the director studied the game a lot but he couldn't translate his knowledge onto the screen in an interesting manner. There is nothing engaging in the way the director handled archery scenes and there is no emotional connection to the hero's character. 'Lakshya' doesn't give a lot of room for the audience to invest in the hero's character or his emotion. Though the track between the hero and his grandfather has an emotional touch to a certain extent, the love track with the heroine lacked entertainment.

The scenes showcasing hero's downfall were handled in a simple manner without much drama. Scenes like the protagonist breaking world record while still being under the influence of drugs and consuming them for concentration goes beyond logic. The film doesn't get lifted even after the arrival of Jagapathi Babu. The director tried to give a fresh treatment to his character but it did not work out. Hero suddenly developing a six-pack looks a bit forced.

Though there is nothing very bad in this film, there is nothing new and 'Laksya' lacked moments that give a high to the audience. There are high emotions during the climax too which makes the film look very bland. Overall, 'Laksya' is a regular sports drama which doesn't offer anything different.

Naga Shaurya worked very hard for this movie. He developed a great body and acted very well too. His efforts are quite visible on the screen. He gives you the feeling of a professional archer and does great in the emotional scenes. His makeover is quite good but it looked unnecessary. Ketika Sharma who teased the youth with her oozing glamour in her first film tried to showcase her acting skills in 'Lakshya'. Jagapathi Babu is decent while Sachin Khedekar impresses. The rest of the actors did their bit and suited their roles.

'Laksya' is okay on the technical front. Kaala Bhairava delivers an average output as none of his songs get registered. The cinematography by Ram is decent and the production values are quite good. Though the archery backdrop offers novelty, the narration leaves a lot to be desired. There is nothing new in this film and lacked emotional depth. The director has to be blamed for this and Santosh Jagarlapudi should have worked more carefully. He scores pass marks with 'Lakshya'.

Verdict: Misses The Target By A Mile