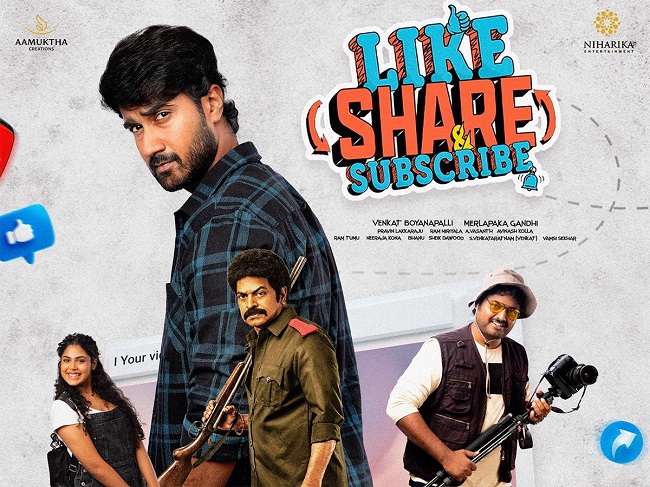 After successful movies like 'Venkatadri Express' and 'Express Raja', director Merlapaka Gandhi failed to score a hit. His 'Krishna Arjuna Yuddham' ended up as a commercial failure and he made 'Maestro' with Nithiin which came out on Disney + Hotstar. After writing 'Ek Mini Katha', he has directed Santosh Sobhan's 'Like Share & Subscribe'. The promos looked entertaining and generated a good buzz. Let us see how the movie turned out to be.

Viplav (Santosh Sobhan) wants to become a big travel vlogger and starts his own YouTube channel named 'Guvva Vihari'. In order to increase his views and subscriber count, he goes to Araku. Vasudha Varma (Faria Abdullah) who is a travel vlogger herself is an inspiration to Viplav. She is also in Araku for getting some content. While both of them are working on getting their travel vlogs, Viplav finds out that Vasudha is DGP's daughter. Naxalites try to get revenge on DGP through Vasudha and kidnap her along with Viplav. Who is this gang? What happens to Vasudha and Viplav? Have they grown closer to each other? All these questions will be answered in the movie.

In the movie, Santosh Sobhan narrates his story to Raghubabu. Whenever Santosh takes a break, Raghubabu gets irritated and asks the hero to continue the story as it is quite tense and interesting. But it is not that interesting to watch his story unfold on the big screen. The movie is haphazard right from the start and the audience wants to know more just because they need clarity on where this story is going. Merlapaka Gandhi's attempt to narrate a serious story in a funny manner backfired instantly. In the name of comedy, there is a lot of silliness in the movie and the screenplay lacked any force which made it hard for us to like 'Like Share & Subscribe'.

Merlapaka Gandhi made this film with a considerable budget in various locations with some noted artists. But he kept 'Like Share & Subscribe' as a title which is in no way related to the story. One gets doubt whether it is a feature film or a YouTube video. This may be one of the reasons why this movie was not taken seriously by the audience. It looks like Merlapaka Gandhi got confused himself thereby ending up confusing the audience too. There are many elements like Naxalite and police war, peace talks with the government, the killing of a Naxalite leader and many other serious things. Around all these, he penned a regular story of a video blogger. These two storylines are not jelled well and the hero's efforts to become a successful YouTuber are confined to a small part. But the movie is named 'Like Share & Subscribe' which is in contrast with what the actual story was.

Gandhi was successful in generating hilarious episodes in movies like 'Venkatadri Express', 'Express Raja' and 'Krishna Arjuna Yuddham' with typical characters. But he failed to repeat the same in 'Like Share & Subscribe'. Sudharshan being introduced as the cameraman for 'Ram Leela' and 'Dangal' and Santosh hiring him for his YouTube channel and finding out that it was all a lie sounds too silly. This kind of comedy worked back in 'Ammo Okato Taariku' days but it looks pretty outdated. There are a lot of such silly scenes in this movie.

We are not sure where 'Like Share & Subscribe' completely fell off the track as the comedy worked out in several parts. Hero visualizing how he is going to fight the villain gang but what happens in the reality turned out to be completely opposite is quite funny. Brahmaji did his best and generate good laughs in theatres. But the movie is filled with occasional laughs and lacks a tight screenplay as well as clarity in the story which turned out to be a huge minus. Naxalite storylines are not at all working out these days and the director based the complete movie around it which is another big disadvantage. Barring a few laughs, this film is a test for the patience of the audience.

Santosh Sobhan already proved to everyone that he is a good actor. He once again showed his worth and appeared very energetic in Viplav's role. His acting gets connected to the youth instantly. If the directors use him in the proper way, he has the potential to reach the next level.

Faria Abdullah did not look like a heroine and appeared as a normal girl which is fine but her character lacks any substance despite her being throughout the movie. It is Brahmaji who impresses you the most in this movie. All Brahmaji needs is a good character to show his talent and his action as a dim-witted Naxalite is hilarious. Meme Gopi and Naren did quite well and Sudharshan is decent as the hero's friend. Sapthagiri is okay too.

Praveen Lakkaraju and Ram Miryala's music is strictly average. None of the songs register in your mind and the background score is decent. The visuals by Vasanth are good and his talent is at display in this movie. The production values are decent. Merlapaka Gandhi who is known for his entertaining movies has missed the mark once again. Though some of the comedy portions were well executed, he disappointed in all other aspects. The confused narration and lack of a strong story made this movie quite uninteresting.

Verdict: No Likes & Shares For This Film