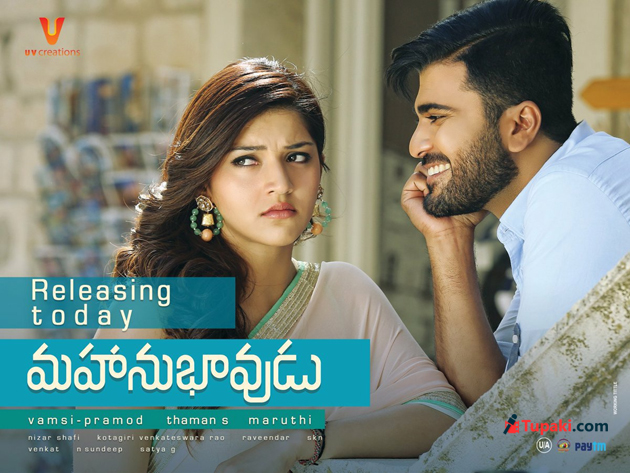 Sharwanand has been tasting success more often ever since he began choosing entertaining subjects. Even Maruthi is known for full-filled concepts. The film in their combination is expected to be a laugh riot. Let's see how well 'Mahanubhavudu' has shaped up...

Anand (Sharwanand) is a software professional with Obsessive Compulsive Disorder (OCD). He treats his perfection for cleanliness like a qualification but others pay the price for his obsession. Anand & Meghana (Mehreen Kaur) falls in love, even her Father gives his consent for their marriage. Here comes the big twist in the story...! Upon knowing about the severity of the OCD, Meghana ends the relationship with Anand. That's when Anand visits the village of Meghana to win her heart again. Watch 'Mahanubhavudu' in theaters nearby to know if the story ends on a positive note or not!

Sharwanand once again told how versatile he can be. He just breathed life into the character of a person with OCD problem. The kind of body language, mannerisms and performance required for the role has been offered by him. His comic timing is exceptional once again.

Mehreen Kaur looks gorgeous and viewers have a pleasant feeling every time she appears on the screen. Youth will go crazy watching this Punjabi Girl. She performs well & her chemistry with Sharwa is spot on.

Vennela Kishore generates rib-tickling comedy. Nasser does well in the role of Father. Rest of the cast have done justice to their roles.

Thaman got the opportunity to offer a feel good music after a long time and he made it count. Melody Tunes, Pleasant Picturization & Perfect Placement have been an asset. Even Background Score isn't bad. Cinematography by Nizar Shafi is pretty good. Visuals have been so rich throughout the movie. UV Creations could never disappoint when it comes to production values. Maruthi showed his mark as Director with 'Mahanubhavudu'. Though he has gone to extremes at times, Comedy generated with effective use of OCD is commendable. There is no freshness in the movie except for the concept of OCD but what matters the most is entertainment and that's what Maruthi delivered.

Maruthi have the knack of generating humour using the defects of Protagonists. After Forgetfullness in 'Bhale Bhale Magadivoi', He arrives with 'Mahanubhavudu' in which Hero have an OCD. The only difference between both the films - Mahanubhavudu (Heroine hates Hero, but her Father likes him), whereas Heroine's Father dislikes Hero in Bhale Bhale Magadivoi. What worked in favour of both the movies is the comedy generated using the Disorder.

Makers used the OCD concept throughout the movie. Hero's Love Story, Break-up & Reunion, Everything has been designed based on the disorder. Even the Protagonist loves the Heroine because of her cleanliness. Comedy has been generated used Hero's characterization itself and there are no separate tracks.

On the flip side, 'Mahanubhavudu' is predictable from start to finish & audience could easily guess what's gonna happen next. Even logic goes missing in crucial scenes of this movie. In addition, Maruthi has gone to extremes in scenes based on OCD at times. Village set-up in Second Half & even the Climax of the movie is too routine.

Lead Pair's Chemistry, Soothing Music, Pleasant Cinematography and ample Comedy makes this Sharwanand-starrer a thorough entertainer. Especially, The terrific rapport shared by Sharwa & Vennela Kishore elevates the film in the second half. Overall, 'Mahanubhavudu' have all the elements to be choice of movie buffs during this Dussehra season.