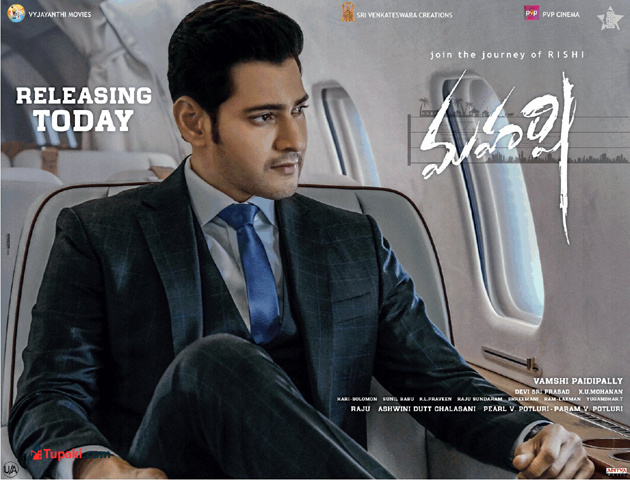 Vamshi Paidipally worked with all the Top Stars of Telugu Cinema (Prabhas, NTR, Charan, Bunny) except Mahesh Babu until recently. With 'Maharshi', He not only completes a full circle but also got the opportunity to direct the landmark film of the Superstar. Posters, Promos, Songs & Pre-Release Promotions generated good buzz around the biggie. Will 'Maharshi' become a memorable film in the career of Mahesh Babu at the Box Office?

Rishi (Mahesh Babu) who belongs to a middle-class family doesn't want to be like his Father who had seen many failures and faced several insults. He becomes the CEO of a biggest Corporate Company in the World with his hardwork and determination to reach greater heights. At one point, Rishi realizes success doesn't mean money or stature and there is sacrifice of his Friends (Allari Naresh, Pooja Hegde) behind his growth. What has he done for his close buddy? What is the true meaning of success? How did he emerge as a Maharshi? Do watch Maharshi in theatres nearby to find out answers..!

Mahesh Babu has done a role with three shades. He, however, managed to show significant variations only in the role of college student. That doesn't mean his performance in the other two shades wasn't good enough but the freshness is missing. Be it his looks or histrionics in certain scenes, They remind us of films such as 'Srimanthudu' & 'Bharat Ane Nenu', and offers a monotonous feeling.

Allari Naresh leaves a lasting impact with the role of Ravi. Just alike 'Gaali Seenu' in 'Gamyam', Ravi in Maharshi will be remembered for a very long time. However, Allari Naresh gets sidelined after a point and he wasn't given proper ending.

Initially, Pooja Hegde's role gives an impression that it could be different from regular Heroine character. As the film progress, Viewers get disconnected with her character due to the inconsistency in the character graph.

Undoubtedly, 'Idhe Katha Idhe Katha' is the best song in the album of 'Maharshi'. 'Padara Padara' is another track which gets positive feedback. None of the remaining Songs left a strong impact. Background Score isn't bad but at times viewers get reminded of other films. Cinematography by KV Mohanan is marvellous. Production Values are grand and richness is evident in every frame. Although the subject of 'Maharshi' lacked freshness, It has got the soul but Vamshi Paidipally hasn't succeeded fully in presenting it on the screen. Preachy Narration makes the viewers feel restless after sometime. We get the feeling of attending a personality development class while listening to the dialogues. You realize Vamshi Paidipally's command on the craft while looking at each sequence separately but on a whole he failed to narrate the subject in a heart-touching manner.

'Maharshi' is the 25th Movie of Mahesh Babu. It's the story of Rishi who was born in a middle-class family becoming the CEO of corporate company and reaches a village in AP to fight on farmers issues in support of his Friend. The role of Hero was designed as a role model to match up to the landmark film status. There is entertainment, sentiment and fan moments in 'Maharshi'. Getting too much preachy, long duration, story/screenplay/scenes resembling other films worked against this flick.

Promos of 'Maharshi' gave a feeling that they were inspired from other films including those starring Mahesh Babu. You get the same impression while watching the movie as well. '3 Idiots' Inspiration can be noticed during the college-backdrop scenes. Speech in the presence of media on Farmers issues remind us of 'Khaidi No.150'. Be it Mahesh's looks or expressions & DSP's songs or background score, You could spot the similarities with previously released films. Vamshi Paidipally ensured there is some attraction in every scene to prevent viewers from getting frustrated. Although freshness is missing, He succeeded in making the movie engaging to some extent.

College Episode is the most entertaining, engaging and refreshing aspect about 'Maharshi'. New Look and Body Language of Mahesh Babu is pleasing to watch in these scenes. This Youthful Episode is racy but there isn't much story in this part. Mahesh offers a monotonous feeling be it in the scenes in which he wore suits or formal dress. The actual story begins in the Second Half. Episode of Mahesh extending support to his Friend who is fighting against a Corporate Firm looks artificial because of too much cinematic liberties.

Protagonist does nothing much until the Pre-Climax though he reaches the Village with a goal. From then onwards, The pace of the movie picks up and the press meet sequence placed here is impressive. This is where the viewers get emotional but the impact could have been more if the villain role was etched out well. If not for 'Idhe Katha Idhe Katha' song, Climax could have been a mess. This emotional song brings the good feeling among the viewers before they step out of the theatres. Overall, 'Maharshi' have something for each and every section of audience but Vamshi hasn't succeeded in narrating the Journey Of Rishi in a most emotional and engaging manner.