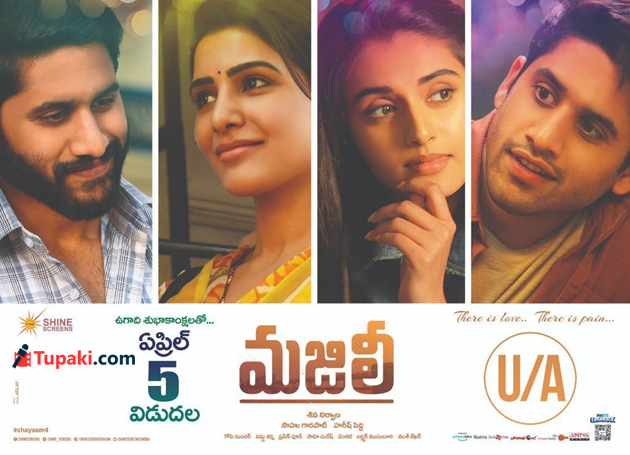 Love Stories have always worked for Naga Chaitanya. After three back-to-back flops, He is back to his favourite genre with 'Majili'. Both Chay and Sam has come together for the first time after their marriage. Director Shiva Nirvana of 'Ninnu Kori' fame come up with a much-more emotional subject this time.

Poorna (Naga Chaitanya) is a Youth who aspires to be a Cricketer. He falls in love with Anshu (Divyansha Kaushik) who happens to be the daughter of a Navy Officer but local politics leads to their break-up. At this phase, Poorna gets married to Sravani (Samantha) but he lives in his own World due to the heart-break. Why did Anshu opt for a separation? What has Sravani done for Poorna? Watch 'Majili' to know rest of the tale!

Poorna will remain as a memorable role in the career of Naga Chaitanya irrespective of the films he does in future. This is the toughest role he played so far. Variations showed in the character with two shades is marvellous. He is so apt be it as 20-Year-Old Youth and a Dejected Lover. Especially, Chay excelled in the emotional sequences in Climax. He showed love stories are his forte once again.

Samantha leaves a huge impact with the role of Sravani even though she appears only for half of the movie. Undoubtedly, This is one of her Top 3 Performances. Divyansha Kaushik is impressive. She earned brownie points with her screen presence and bubbliness.

Rao Ramesh used all of his experience to excel in the role. Posani generates his mark humour. Suhaas who did the role of Hero's Friend leaves an impact. Even the Child Artiste who played the role of Meera shines. Atul Kulkarni and Subbaraju have done justice to their roles.

Technically, 'Majili' is at high standards. Songs composed by Gopi Sundar are good enough. Even SS Thaman's Background Score is worth praising for elevating the scenes and maintaining the feel. Vishnu Sharma's Cinematography is pleasant. Production Values are flawless. Writer-cum-Director Shiva Nirvana made 'Majili' even better than 'Ninnu Kori'. This Young Filmmaker showed how good he is while dealing with love stories once again. He succeeded in narrating a well-known story in a pleasant and heart-touching manner. Believing that audience will embrace the film if they connect with the lead characters worked for him once again. Not to forget the simple yet meaningful dialogues penned by him.

Youth will go crazy if a love story touches their hearts. We have seen that happen in the case of 'Tholiprema', 'Yem Maya Chesave' and few other classics. Generating the feel in a love story is never gonna be easy as the story remains almost same for most films in this genre. If the Filmmakers create the characters whom audience could relate to, Wonders can be created and that's what happened with 'Ninnu Kori'. Now, Director Shiva Nirvana is back with 'Majili' which doesn't have a new story but still viewers could connect with the characters of Poorna-Sravani and feel the emotions they were going through. Audience could feel the pain in the heart-break of Poorna and how much Sravani had to go through during this phase. The manner in which these two roles were moulded and performances of the lead pair takes 'Majili' to the next level. These two characters will be remembered for a very long time.

Just alike in 'Ninnu Kori', You get to see pleasant love story in the first half and greatness of marriage in the second half of 'Majili'. The backdrop and characters here are different from the previous flick. Right Balance maintained by Shiva Nirvana in both the halves is appreciable.

First Half of 'Majili' looks refreshing due to the cricket backdrop, new beauty Divyansha and few lovable moments. Whereas, Second Half is all about the emotional moments post marriage. The only drawback could be the slow pace in these portions. Audience could judge how the Second Half is going to be by the end of Interval. Touching Human Emotions keep the viewers hooked to the screens.

The role of Sravani & how Samantha portrayed it stood as a major highlight. She stole the show playing the character of a Wife defending her Husband who gets addicted to alcohol post break-up with First Love. Shiva Nirvana took cinematic liberty to end the movie. Simple yet emotional Climax, Meaningful Dialogues & Matured Performances overshadow the minor flaws. Overall, 'Majili' is a must watch film for all those who loves the films in this genre.