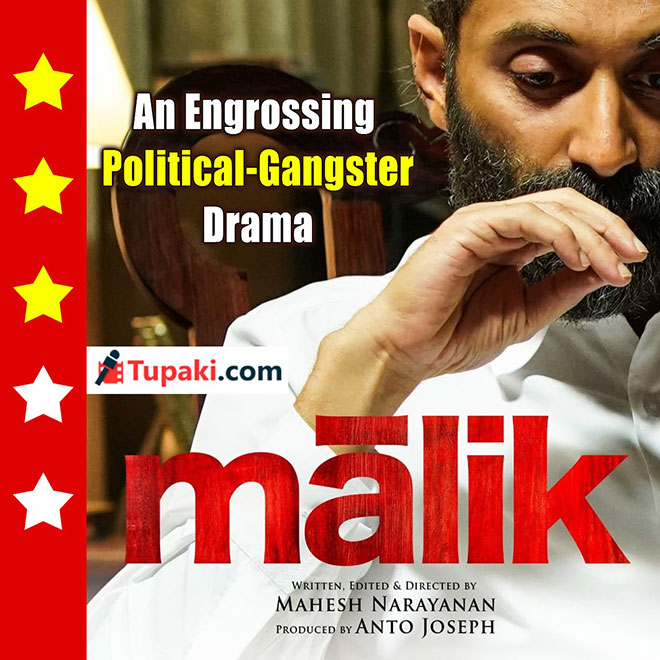 If there is any actor who got benefitted from the lockdown, it is definitely Malayalam hero Fahadh Fasil. The talented actor has impressed the Telugu audience with his dubbed films and people started watching his straight Malayalam films with the help of subtitles too. He has now arrived with a political crime thriller 'Malik' which is now available on Amazon Prime Video.

Sulaiman Malik (Fahadh Faasil) is the messiah of the masses in a village named Ramadapally in Kerala. He is an aging 'Godfather' like figure who gets arrested by the police due to the crimes he committed in the past. The police decide to end his life in prison and put an end to his crime empire. How will he manage to come out of it? What are the crimes that Malik committed in the past that made the police decide to kill him? How did Malik become such a huge personality over the years? All these questions will be answered in this film filled with a lot of drama and action.

Before diving into the review, let us make things very clear. 'Malik' is a complete Fahadh Faasil show right from the moment go. He gets able support from the rest of the cast and technicians but it is the supremely talented star hero that makes you get hooked to the film despite its snail-paced narration. The film has a runtime of 2 hours and 45 minutes and explores various topics like the politics between Muslim and Christian communities in that area, tsunami, the living conditions of the poor and others.

The film starts off with a 10-12 minutes sequence which is filmed in one shot. It is pure cinematic brilliance and the premise has been established perfectly through it. The film then moves showcases the life of Ali Akka who starts off as a criminal and turns into a man of masses. The story pans from 1980 to the current day and has been narrated in three flashbacks. The saga doesn't follow a linear narration and the spaced flashback pattern helps a lot in bringing the authentic and dramatic feel to the movie.

The story of 'Malik' as nothing new to offer but it is the gripping direction that makes the audience watch it till the end. There are some scenes that definitely make you root for the protagonist's character and the compelling screenplay is just a treat to watch for the movie lovers. But the main problem with 'Malik' is that it doesn't have a fast-paced narration that you associate with a political drama or a gangster film. The film takes its own sweet time to unravel and it is after a certain time that things get interesting. Till then, the views may need to get their patience tested. As we know, Malayalam movies don't necessarily follow the commercial pattern and while it may the reason why most of us like these films, the lengthy runtime with slow narration and no commercial elements may not interest a section of the audience.

If you manage to ignore the slow pace, the terrific performance from Fahadh Faasil and fantastic narration makes for an engrossing watch. People who like gangster dramas will definitely like it.

As said before, Fahadh Fasil is an actor par excellence and he proves his worth once again in 'Malik'. He carried the film on his shoulders with ease and showcased many variations. He starts off as an angry young criminal and transforms into an aged and matured 'Godfather' figure in this movie. This transformation was portrayed brilliantly by Fahadh. Starting from his acute dialogue delivery to nuanced expressions, everything was perfect and the way he owned the character is praiseworthy. He once again delivers what is expected from him – the best.

Nimisha Sajayan deserves a special mention too. She steals the scene as Fahadh's wife and gives a commendable performance. She supports the lead actor quite well. Vinay Fort, Joju George, Sanal Aman and others did their supporting roles in the perfect way possible. They brought in a lot of depth to this film and the casting director should be definitely appreciated.

Sanu Varghese did a fantastic job. His cinematography is amazing and the visuals perfectly blend with the serious storyline. The 11-minute starting sequence which was filmed in a splendid manner stands as a testament to his tremendous talent. Music by Sushin Shyam lifts the proceedings and the Arabic touch given to the background scores definitely suits the film. The artwork should be appreciated as the costumes, sets and other details were looked after very carefully. The editing is neat though the snail pace may test your patience at times. The production values are top-notch.

Though the basic story has nothing new and reminds us of some classic gangster flicks, it is the gripping narration and compelling direction from Mahesh Narayan which works big time. Aided by Fahadh's award-worthy acting, this wonderful drama is surely going to be an engrossing watch.