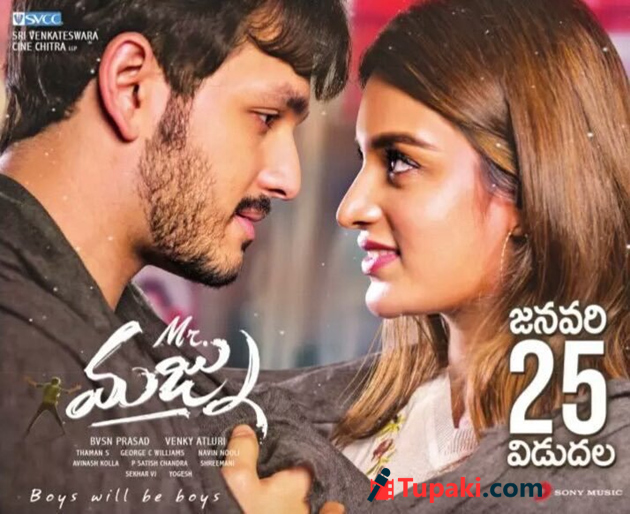 Akhil Akkineni was unable to deliver Box Office success with either 'Akhil: The Power Of Jua' or 'Hello'. He now teamed up with Director Venky Atluri of 'Tholi Prema' fame to deliver 'Mr.Majnu'. Let's see whether if the third attempt fetches much needed success for the Akkineni Scion...

Akhil Akkineni is perfect as Playboy, be it his stylish appearance or body language. Youth will connect well to his trendy look. He, however, falters once again while performing emotional scenes. More focus should be on the diction. As usual, He performs dances and fights effortlessly.

Nidhhi Agarwal does a decent job in the role which offered ample scope for performance. Rao Ramesh left a mark of his own but his character was neglected after a point. Even the roles of Priyadarsi and Hyder Aadi weren't dealt properly after a point. Jayaprakash, Naga Babu, Sitara, Pavithra Lokesh and Raja have done justice to their roles.

Music composed by SS Thaman stood as an asset to 'Mr.Majnu'. 'Kopamga...' is already topping the charts. Few other songs were composed so well. Sadly, Only the Title Song manages to arrest the attention when it comes to picturization. Cinematography by George C Williams is a major attraction. BVSN Prasad hasn't compromised on production values. Director Venky Atluri repeated 'Tholi Prema' formula. While the First Half focusses on Love & Break-Up, Second Half is about the Reunion. He, however, failed to come up with strong characterisations and gripping screenplay this time. Few Scenes in 'Mr.Majnu' will appeal to the Youth and Families. Director failed to leave a mark of his own in the Second Half.

Akhil Akkineni learnt the biggest lesson of his career with 'Akhil: The Power Of Jua'. There after, He is preferring to do romantic entertainers which suits his age. Although 'Hello' attained positive talk, It wasn't able to draw crowds to the theatres due to lack of ample entertainment. So, The Youngster assumed 'Mr.Majnu' which have all the elements could be perfect to score his first success. Even the Venky Atluri-directorial gives such an impression to the audience for sometime but they realize it's not working towards the end. First Half of 'Mr.Majnu' engages to some extent. Had if the Second Half is anywhere close to it, This would have been a successful film for the Akkineni Scion. Formula-based Narration in the latter half played the spoilsport.

'Those Prema' clicked because it's a feel-good entertainer. Venky Atluri failed to make 'Mr.Majnu' on par with his directorial debut. Even the conflict point isn't strong enough to keep the viewers engaged. Heroine who hates Hero falls madly in love with him after few incidents. This point wasn't established by the Makers convincingly. The reasons quoted for the break-up appear to be forced. So, Audience doesn't feel the pain in the separation. Then, How could they ouch for their reunion?

Playboy Hero transforming into a hardcore Lover is an old template. Both ANR and Nagarjuna had tried such a concept decades ago. They would only click with the Movie Buffs if the characterisations are well written and screenplay is gripping. 'Mr.Majnu' falls flat in both these aspects. Although the emotional connect is missing in the First Half, Presentation of Akhil as a Playboy and Responsible Family Member is quite good. The graph continues to decline in the Second Half to make matters worse.

Comedy Track of Hyper Aadi wasn't effective. Unnecessary Songs and Fights spoiled the flow of the movie. Even the placement of 'Kopamga..' song wasn't good. Akhil's Performance as Lover Boy, Music, Cinematography and Decent First Half are the only positives of 'Mr.Majnu'.

Bottom Line: It Can't Make You Fall In Love!