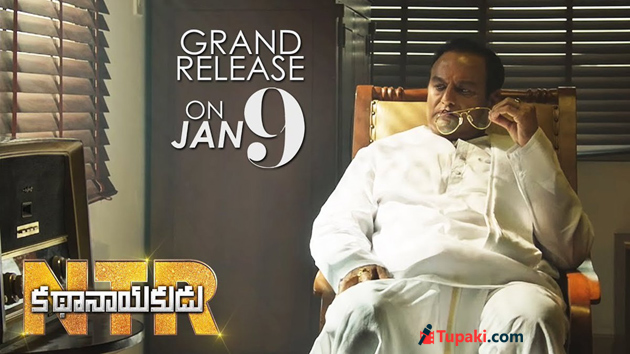 NT Rama Rao - A Legend who remains in the hearts of Telugu People forever. Reaching greater heights in Film Industry and Politics is something impossible to achieve even in the case of Superstars. NTR was able to rule the Film Industry for decades and become Chief Minister twice. Even Today, People admire him for the memorable roles he portrayed and welfare/development schemes he implemented as a Chief Minister. Making a biopic of such a legendary personality isn't an easy thing to do. Balakrishna & Krish took up the challenge of narrating the unbelievable journey of NTR. Let's see how well it's been done...

Nandamuri Basavatharakam who undergoes treatment in a hospital after being diagnosed with cancer recalls the memorable journey she had with her Husband NTR since their marriage. NTR quits the job in the Registrar Office due to his aversion for corruption and forays into Films. Rest of the film is about how NTR emerged as an undisputed king of Telugu Cinema and what prompted him to make political entry in the early 80s.

Balakrishna breathed life into the character of his Father. Initially, Audience will find it hard to accept him as NTR because neither his look nor his physique matches that of his Father. Gradually, Viewers start getting used to watching NBK as NTR. In the Second Half, No other Actor except Balakrishna could be imagined as NTR in the 60 years phase. Balayya's get-up and performance are fabulous in these portions. The way he emotes in the Climax stood as a major highlight.

All those who wondered why Vidya Balan was roped for NTR Biopic will accept that she is the perfect choice to essay the role of Basavatharakam. All of her scenes with Balakrishna have come out well and she did a fine job in emotional part.

Sumanth is aptly cast as ANR. He left a strong impact in every sequence with expressions which look so natural as if the real ANR played that role. Kalyan Ram has done a decent job playing his Father Harikrishna on the screen.

All the Technicians worked in tandem for making 'NTR - Kathanayakudu' shape up the way it did. Background Score by MM Keeravani is marvelous. Especially, The kind of elevation he offered for the entry of NTR as Sri Krishna offers goosebumps. He took few emotional sequences to the whole new level with his expertise. Composition of Songs have been good. Output delivered by Cameraman Gnanasekhar is so pleasing. He succeeded in bringing authenticity to the scenes depicting the realistic situation (1950 to 1980). Art Director recreated the atmosphere in the Film Studios in those days quite well. Production Design is one of the highlights of the biopic. Makers haven't compromised on the production values at all. Dialogues penned by Burra Sai Madhav are heart-touching. Inspite of the limitations, Krish Jagarlamudi succeeded in narrating the rise of NTR as India's First Superstar in an entertaining manner. You could see his sensibilities and range as a Director in many sequences. The end result could have been at a different level had if there were few more high points in the movie. Lethargic Pace and Long Runtime are the two major factors here.

The life story of NT Rama Rao is an open book. Telugu People knew almost everything about the Legendary Personality. NTR never looked back after his Film Entry and he hardly had any setbacks. The only time, He faced criticism was when Sri Krishna role was attempted by him for the first time. It didn't take much time for the Legend to prove his critics wrong with 'Mayabazar'.

NTR have ups & downs in his political career, but he was an undisputed kind in Film Industry. This is why Krish focussed majorly on the bonding between NTR-Basavatharakam and NTR-ANR apart from Film Entry & Political Entry in Part 1. Story of 'NTR -Kathanayakudu' doesn't have many high points. This is where Krish showed his expertise in presenting the known facts beautifully. All those who admire NTR will appreciate the sincere efforts. Even general public will find most of the biopic engaging. Krish succeeded in presenting the life story of NTR effectively extracting the best from artistes and technicians.

Hardwork put in by Balakrishna in the role of NTR could be seen on the screen. As Young NTR, Balakrishna is no match to his Father and this is the biggest drawback. He, however, looked very much like his Father in the aged avatar and mesmerizes with his performance. Screen Presence & Acting Prowess of Balayya in the sequences barring Film Episodes stood as a special attraction.

Lack of twist n turns is a key drawback of 'NTR Kathanayakudu'. Story progresses on a flat note and makes viewers find it boring after a point. Sequences depicting how NTR left a mark of his own on the Film Industry have been executed well. A strong impact was left with the Sri Krishna avatar in 'Mayabazar'. Episodes of NTR turning director with 'Seetha Rama Kalyanam' and the risk he took with 'Dana Veera Sura Karna' were presented quite well. Death Sequence of NTR's Son Ramakrishna is an emotional moment. Most of the scenes in the First Half were ineffective as Balakrishna doesn't resemble like NTR.

A lot of sequences in Second Half looked impressive because Balayya get-up as aged NTR and his performance were outstanding. This is where Krish focussed on NTR's off the screen personality and his personal rapport with ANR. The range of 'NTR Kathanayakudu' increased with sequences depicting the realistic situation which prompted NTR to foray into politics. Part 1 ends on a high with an emotional sequence related to NTR's political debut.

Bottom Line: Journey Of A Legend!