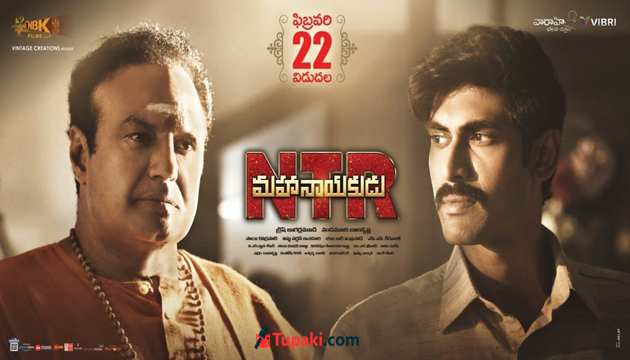 Nandamuri Balakrishna took the call to make NTR Biopic and play the lead role in it. Krish accepted the mission after Teja walked out of the prestigious project and planned it in two parts. While 'NTR Kathanayakudu' ended up as failure inspite of attaining positive talk, 'NTR Mahanayakudu' hit the screens Today with less expectations. Will the makers attain Box Office success at least with Part 2?

'NTR Kathanayakudu' ends with the sequence of NTR announcing Telugu Desam Party. 'NTR Mahanayakudu' kickstarts from where Part 1 ended. It showcases how NTR has gone into the public and ended the decades long Congress-rule with record majority. Welfare Schemes implemented by NT Rama Rao in the best interest of people during his first term as Chief Minister have been highlighted at the later stage. Rest of the story is all about how Nadendla Bhaskar Rao dethroned NTR from power and in which way did the legendary personality got hold of the CM Chair again.

Balakrishna looked awkward as NTR in few sequences of 'NTR Kathanayakudu'. He, however, appeared more like his Father in the aged get-up. Balayya won't disappoint even performance-wise. At the same time, Movie Goers don't get to see clap-worthy moments in Part 2.

Once again, Vidya Balan impresses as ailing Basavatarakam. She brought depth to the proceedings with her screen presence and performance.

Sachin Khedekar leaves a mark of his own playing the role of Antagonist. He is perfect as Nadendla Bhaskar Rao who is friend-turned-rival of NTR.

Rana Daggubati managed to do well in the role of Chandrababu Naidu. Kalyan Ram as Harikrishna, Bharath as Daggubati Venkateswara Rao and Daggubati Raja as NTR’s Brother have been alright. Vennela Kishore as Rukmangadha Rao is okay.

Songs composed by MM Keeravani are situational but not sensational. Yet again, He manages to impress with the Background Score. Cinematography by Gnanasekhar is flawless. Production Values are satisfactory. Makers failed to recreate the euphoria which existed when NTR forayed into politics. Shooting most of the sequences indoor rather than outdoor became a big factor here. Watching 'NTR Mahanayakudu' offers a feeling that Krish helmed the project according to the limitations. He had to remain conscious about what has to be shown and what he should be hiding throughout the course of the shoot. That's something which is unexciting from the public point of view. Nevertheless, Krish deserves credit for presenting the content in a better way.

'NTR Kathanayakudu' is basically about the rise of NT Rama Rao as the undisputed king of Telugu Cinema and the aspects which influenced him to float Telugu Desam Party. Public won't complain about exaggerations if the content is related to just film career or character of NTR. When it comes to the public life, People can't appreciate if the facts were distorted and exaggerations were preferred for glorifying something or somebody. TDP Sympathisers will be pleased with any such attempts but neutral audience will find it underwhelming. The biggest drawback of NTR Biopic is the fact that it doesn't cover NTR's life till his last breath. Part 2 ends with the demise of Nandamuri Basavatarakam after NTR regains power with the support of majority of the MLAs. What about the family issues and setbacks in political career at the fag end of his life?

The role of Chandrababu Naidu essayed by Daggubati Rana is being presented as a saviour of NT Rama Rao after the backstabbing of Nadendla Bhaskar Rao. Certainly, Strategic moves of Babu during that phase became very crucial. At the same time, People mayn't find the the manner in which Naidu was glorified as a hero pleasing due to shocking incidents which happened later.

Only those people who are interested in political affairs could connect with 'NTR Mahanayakudu'. In addition, Many of them will differ with the content of Part 2 due to the fact that backstabbing by Chandrababu Naidu is far bigger than backstabbing by Nadendla Bhaskar Rao. Makers projected what happened in the 80s as a huge conspiracy ignoring the 90s incidents completely.

Certainly, 'NTR Mahanayakudu' have few good moments. Most of the First Half is about NTR's Political Entry, Poll Campaigning and Historic Victory. Lack of moments which offer goosebumps and nostalgic feeling is a drawback. Inspite of that, First Half is well-paced to leave a good impression. There is lag when it comes to sequences post the backstabbing of Nadendla Bhaskar Rao in Second Half. Viewers get the feeling of watching lengthy scenes. Too much exaggeration done to elevate NTR & Naidu appears unconvincing at times. Overall, 'NTR Mahanayakudu' might please TDP Supporters but regular audience may find it half-baked.