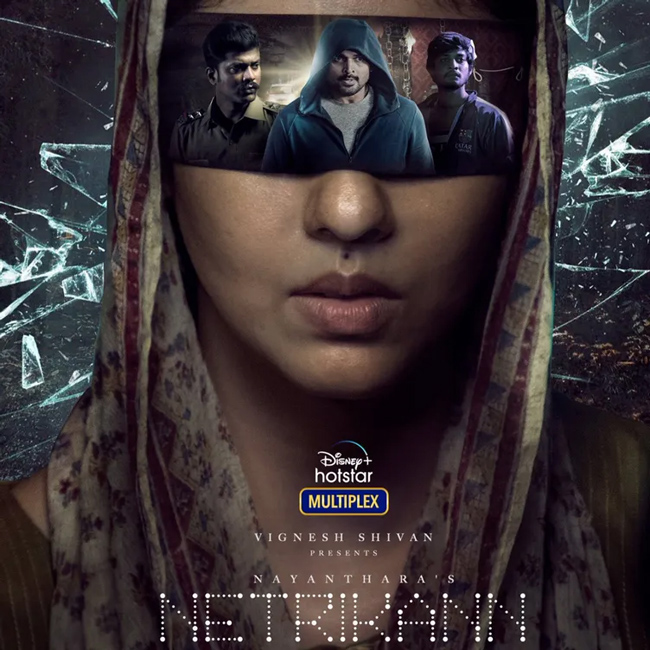 Nayanthara has earned the tag of Lady Superstar and it is completely justified as her films minted a lot of money and they are at times equal to some star hero movies. She acted in a lot of lady-oriented movies and the latest offering from her is 'Netrikann'. This thriller movie is made by Milind Rao who earlier made 'Gruham'. This movie was released in Tamil and Telugu languages on Dinsey+Hotstar. Let us dive straight into the review to know more about this project.

Durga (Nayanthara) is a CBI officer and she is also an orphan. She looks after Aditya, another orphan in the orphanage as her own brother. But he, unfortunately, dies in an accident and Durga becomes blind in the same accident. She blames herself for the death of Aditya and gets used to living life as a blind person. Suddenly, a lot of girls go missing in the city and Dhina (Ajmal) who is a psycho kidnaps them, tortures them and later rapes them. He tries to kidnap Durga but she escapes somehow. From that moment, he makes his purpose to kill Durga and she decides to catch him. Will Durga succeed in her mission becomes the rest of the story.

The concept of a person who appears to be a common man on the outside but ends up being a psycho killer who kidnaps, tortures and kills people while the police department is banging their heads to find this person but it is all solved when the hero enters the scene and starts investigating it has been used plenty of times. Ram Gopal Varma made 'Anukshanam' on the same lines, Naga Shaurya's 'Aswathama' is a bit similar to this story and we all know about Tamil films like 'Ratsasan' and 'Pshyco' which are pretty similar in terms of the story. A lot of films were made on this psycho killer genre but what makes 'Netrikann' different from the rest is that it is a female lead who solves the mystery and that too a blind woman. This is what makes the film interesting and brings the curiosity among the viewers. Barring that point, the screenplay and proceedings appear quite regular and run on a predicted path. Films like these depend heavily on the strong characterization of the psycho killer and we all know that films like 'Ratsasan' and 'Anasuya' were successful because of iconic Nolan and Gulabi Govind characters. The character of the villain is introduced in a menacing manner which raises the expectations but it falls flat after a point of time. While Nayan's terrific portrayal of a blind but very confident woman lifts the film, the poor execution of Ajmal's character disappoints the audience a bit.

Movie buffs have a special interest in psycho killer roles and their atrocities onscreen usually send shivers down the spine. They should get an uncomfortable feeling every time the psycho appears. The reason behind their behavior should be novel but strong but Ajmal's character is a bit behind in these aspects. Many films do not reveal the identity of the psycho for a long time but the makers of 'Netrikann' revealed it in the beginning itself due to which the audience who usually have a couple of high moments to look out for got reduced by one. If the story is narrated in a linear way, the screenplay has to be very tight but it went missing in this film. The film doesn't move ahead till a certain time as they filled it with scenes that establish the lead character's brilliance despite being blind. It tests the patience of the audience. The film runs on a specific template where no one believes the lead character when she explains the attack on her but a low-level officer decides to help her and they start investigating about the mystery. There is nothing new in the first 45 minutes and there are not many engaging moments too. But things start to get interesting once the villain starts to target the protagonist. The film grabs your attention after a routine first hour and but the interval and the second half are quite intriguing. Nayan targeting Ajmal in the second half has been presented very well. When the police catches the psycho, people become curious to know about his back story and all they find out is a lame flashback which is sure to disappoint the audience and takes the sting out of the movie.

The director failed to narrate in an interesting and engaging manner despite having a new point. A lot of details are left unexplored which makes it far from convincing. After that, the makers dragged the pre-climax and climax portions heavily and we don't know the reason behind those last 20 minutes. The film has a lengthy runtime which is not acceptable for a thriller and only the middle portions grab your attention but not the entire movie. People who like thrillers can give it a try once but nothing more should be expected from 'Netikann'.

Nayanthara excelled in the role of a blind woman. She did amazing in the emotional sequences and her screen presence is the biggest plus of this movie. Ajmal did complete justice to his role but it was the writing of his character that played the spoilsport. The guy who played the role of a delivery boy did a good job and Manikandan is okay as an SI. The rest of the actors performed decently.

'Netrikann' is top-notch in the technical aspect. Girish Gopalakrishnan's background score is the film's biggest strength and the songs will not be registered. RD Rajasekhar's cinematography is great and the production values are good too. 'Gruham' director Milind Rao who impressed us before failed to repeat the same this time. 'Netrikann' looks familiar to a lot of other movies which came in the same genre. There are a lot of similarities with Myssikin's 'Psycho' movie and there are not many thrills in this movie. The trailer was quite sharp and on point but the movie is nowhere near it.

Verdict: Not Many Thrills In This Thriller