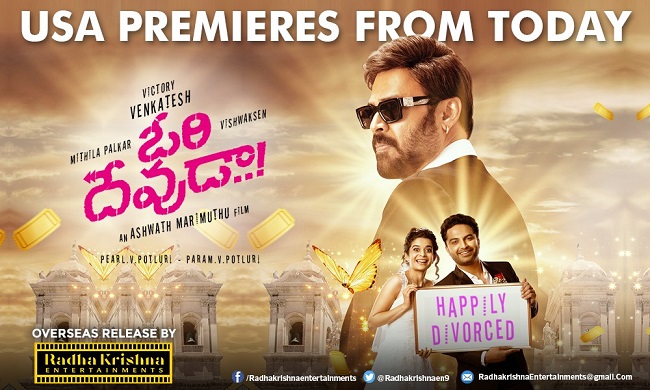 After impressing the audience with 'Ashoka Vanamlo Arjuna Kalyanam', young hero Vishwak Sen is back again with another youthful romantic drama titled 'Ori Devuda'. It is a remake of the Tamil hit film 'Oh My Kaduvule'. Ashwath Marimuthu who directed the original handled this remake too and top producers like PVP and Dil Raju bankrolled this project. After impressing the audience with its trailer and songs, the film has hit the screens today and let us find out how the movie turned out.

Arjun (Vishwak) and Anu (Mithila Palkar) are friends since childhood. As Anu likes Arjun, he gives the nod for marriage. Though they get married, Arjun does not have any feelings for Anu as he still sees her as his childhood friend. This leads to differences between them and they decide to get divorced. Right after Arjun decides to end his marriage, a special person from heaven gives him a second chance. What is that chance? How does it affect Arjun's life? Where will this journey lead Arjun? All these questions will be answered when you watch the movie.

There is a Tamil film titled '12B' which arrived long back. Director Jeeva introduced a new concept to the audience with this movie. The hero in that film tries to attend an interview by getting on the bus but he misses it unfortunately. The director simultaneously shows what happens after missing the bus and what would have happened if he didn't miss the bus. He gives a message that we should enjoy life as it is and should not dwell on thoughts like what would have happened if things went the other way. The theme of 'Ori Devuda' is quite similar to '12B' but it has another backdrop and storyline. Director Ashwath narrated the film in his own style with a different screenplay and narration. After getting successful in Tamil, he made 'Ori Devuda' in Telugu. The story deals with getting a second chance and how does the hero correct his mistakes this time around. It is the highlight on the movie and these fantasy storylines always impress people. Since it is a universal concept, 'Ori Devuda' works well in Telugu too.

The feel-good factor throughout the film is the biggest plus point of 'Ori Devuda'. Most of the scenes run on an entertaining note and the comedy scenes worked wonderfully at certain points in the movie. The emotions work pretty well too but the slow narration makes you feel bored at times. Though the turns in the proceedings are fresh, the regular scenes are quite ordinary which gives the audience a routine feeling. The first half is all about how a youngster who marries his childhood friend struggles to evoke romantic feelings for her. His troubles while working at his father-in-law's tiles business are hilarious. These are the scenes that liven up the mood of the audience. The differences between husband and wife, their quarrels and misunderstandings are dealt in a regular fashion. The only thing that surprises the viewer in the first half is the fantasy angle. The modern-looking Venkatesh and his assistant Rahul Ramakrishna bring in a lot of energy and impress you big time. The interval bang raises curiosity as the hero is offered a second chance by the god.

The attempts the hero makes to change his mistakes by going back in time is quite crazy but in a positive way. The major highlight of this movie arrives in the second half. The emotional scene related to the heroine's father is surely going to move you. It is narrated in a very heartfelt manner and the director's brilliance is on full display. After this episode, the movie gets into an emotional mode and runs in the same manner till the end. The realization scenes of the protagonist run in a predictable way and the melodrama becomes too much after a certain point. The narration starts to feel slow but none of those scenes are badly executed. While everything worked out well, the chemistry between the lead pair is missing in this film and it is a major minus. The audience won't feel the urge to root for them. But the light-hearted approach taken by the director in conceiving the climax worked out well. Overall, 'Ori Devuda' has good entertainment and emotions. It doesn't 'wow' you but doesn't bore you either.

Vishwak is a very good performer and he did a good job once again. He showed versatility in his acting compared to his previous film. It is a tailor-made role for him and he understood the character very well and eased into it. Either frustration or love, Vishwak portrayed both emotions brilliantly.

Mithila Palkar looks like a girl next door rather than a heroine. This helped her a lot and she did complete justice to her role. Asha Bhatt is decent as the second heroine. Murali Sharma showcased his class and maturity in a crucial role. Venkatesh made an impact with this special character and brought in a lot of energy. Rahul Ramakrishna as Venky's assistant tickles your funny bones. Venkatesh Kakamanu is okay as the hero's friend. The rest of the actors did well too.

Ashwath Marimuthu retained the same technical crew with whom he worked with for the original. They delivered what was expected of them and made sure that the magic gets retained in the Telugu version too. Leon James' music brought a lot of energy and the song which Anirudh sang lifted the mood in the theatres. The rest of the songs and background scores are have helped the proceedings. Vidhu Ayyana's visuals are neat and colorful. The production values are quite good. Director Ashwath followed the original template and didn't make any changes. Since the storyline is universal and has a fresh appeal to it, there are not many troubles for the director. Though a few other directors touched it previously, Ashwath managed to impress the audience with his presentation. Along with the story, the screenplay is well written too. The film would have been even better if the first half is crisper. Tharun Bhascker's dialogues are very natural.