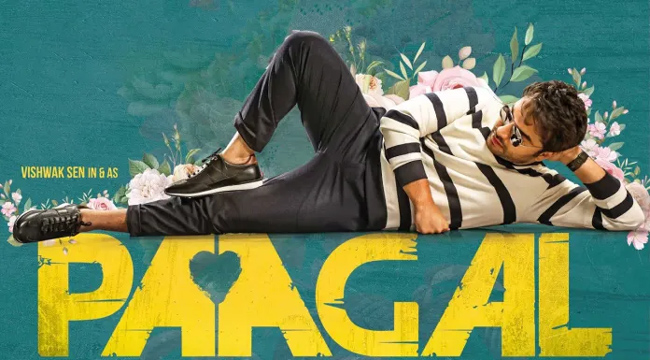 Young hero Vishwak Sen who made a name for himself with films like 'Ee Nagaraniki Emaindi', 'HIT' and 'Falaknuma Das' has arrived with another new film titled 'Paagal'. The crazy teases and entertaining songs have raised the expectations on the film. Nivetha Pethuraj is the heroine in this movie and after a grand pre-release event, the film has finally hit the screens. Let us find out how the film has shaped up.

Prem (Vishwak Sen) loves his mother very much but she dies of cancer while he is in his schooling days. His mother once said to Prem that you get the same amount of love that you give to others. So, he runs behind every girl he looks at to find love. His efforts fail most of the time and he meets Theera (Nivetha Pethuraj) who also loves him back. But situations stop them from ending up together. What are those situations? How will they finally end up together? All these questions will be answered on the big screens near you.

The basic idea of the film sounds very crazy. Hero is the kind of guy who proses to every girl and gets over rejection by confessing his love to another girl immediately. He consoles a girl who gets rejected by proposing to her himself. He proposes to one girl but she rejects him as hero doesn't have a job. So, he gets a job and meets her after 7 years with a job and proposes her again. He even gets to a point where he decides to love not-so-good-looking girls as they are easy to convince. The whole characterisation of the protagonist sounds crazy and people get a doubt on why he behaves like that. Vishwak Sen clarifies about it in the pre-release event itself by explaining about what hero's mother said in his childhood and how it influenced him. People usually get a doubt on how a guy could find something what he lost with the death of his mother by proposing to every girl he sees. It doesn't sound quite logical but the makers made this movie on the sole purpose of entertaining the audience. The film's name itself is 'Paagal' and you cannot expect the hero to behave rationally. It is okay as long as the movie entertains but running an emotional thread on this crazy idea doesn't work out. Hero's antics and whacky ideas to woo girls work out very well and brings some good laughs but proceedings start to get tedious once the movie takes a serious turn. The audience doesn't connect with the film at all as the emotional angle is not relatable which restricts 'Paagal' to an average film.

Other than explaining the reason behind hero's behaviour after a lot of time, the team of 'Paagal' revealed it quite early which worked in favour of the movie. Despite the logic going for a toss, the struggles of hero to find the love he desired appear quite entertaining and makes you laugh. There are a lot of scenes in the first half which provide a lot of fun like hero's love trials with girls, trying out Vizag girls and many others. The comedy track with Rahul Ramakrishna and gang is the major highlight of the first half. Though running behind aged women looks a bit weird, the entertainment quotient doesn't go down a bit which makes us to enjoy the film like we did 'Jathi Ratnalu' which also defied logics. But a small twist turns the story into an emotional ride.

The second half begins with a flashback and hero then falls for a girl and the girl falls for him too. The entertainment goes completely out of the window when the love story enters but the emotions doesn't connect with you. The feel goes missing in the love story and the screenplay gets too slow. Heroine loving the hero from a long time, her pain and other factors appear a bit forced into the story. There is a complete disconnect with the heroine and her father's storyline. 'Paagal' starts off on a good note and you enjoy it in the first half but it goes off track before the interval and doesn't get onto the track again.

Vishwak Sen did a good job. His efforts on his personal styling can be seen onscreen. He entertains well in the crazy character and did decently in the emotional sequences too despite the bad writing. Vishwak needs to take care of his physique. Heroine Nivetha Pethuraj looked beautiful and acted very well. Chinmayee's dubbing didn't suit her. Simran Chaudhary and Megha Lekha didn't have anything to do in the movie. The fat girl who played the role of one of Vishwak's lovers did well. Murali Sharma entertained with his character and so did Rahul Ramakrishna, Ram Prasad and others. Bhumika is okay.

Radhan's music is very good and he shows off his talent in a couple of songs in this film. 'Google Google' and 'Ee Simple Chinnode' stay with you. The rest of the songs are okay. Leon James has given decent background score and the production values of this movie are quite adequate. Naresh Kuppili selected a new and fresh storyline. He brought a curiosity over the film and excelled in the entertaining sequences. He dealt with the comedy scenes quite well in the first half but he faltered a bit in the second half. The film's graph slides down in the later stages of the film and so did the director's work.

Verdict: 'Paagal' Gets Off Track After A Bright Start!