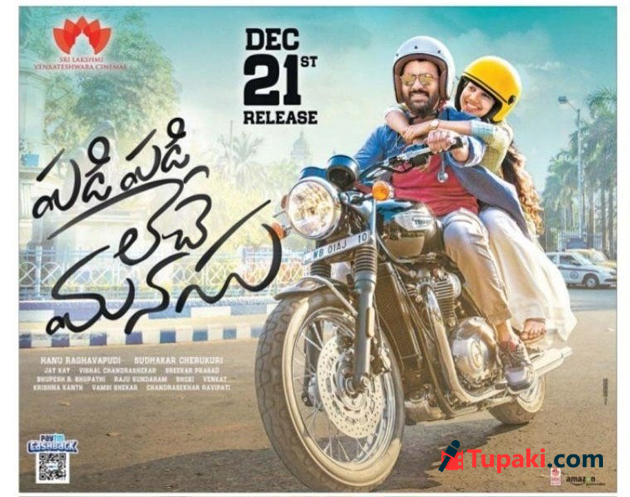 Hanu Raghavapudi managed to attain good reputation although two out three films (Andala Rakshasi, Krishnagaadi Veera Prema Gadha, LIE) done by him were disasters. This time, He arrived with 'Padi Padi Leche Manasu' which is in the lovely combination of Sharwanand and Sai Pallavi. This Love Story which have good expectations hit the screens Today. Is the final outcome as good as the promos?

Surya (Sharwanand) who leads a happy life falls in love with Medico Vaishali (Sai Pallavi). He keeps stalking her & finally wins a place in her heart with his sincerity. However, Surya turns down the marriage proposal because of the disturbing incidents happened in the lives of his Parents. He decides to get married only if they both can't live separately. That's when they end up making their minds to stay away from each other for one year. What happened during this period & did they had a patch-up? Watch 'Padi Padi Leche Manasu' in theatres near you to find answers!

Sharwanand and Sai Pallavi breathed life into their characters. Literally, They had competed with each other so well to an extent that nobody could pick who is the best among them. Chemistry between the Lead Pair is the major highlight of 'Padi Padi Leche Manasu'. Both of them had excelled in the emotional scenes. Sharwanand shows his speciality in few sequences. In the Interval Block, Sai Pallavi arrests the attention of viewers with her marvelous acting skills.

Priyadarsi tickles the funny bone. Rest of cast wasn't utilized well & hence they fail to leave a strong impact. Murali Sharma, Sampath, Vennela Kishore and Priya Raman doesn't have much scope at all. Kalpika and Ajay were alright. Sunil fails to impress yet again.

'Padi Padi Leche Manasu' is technically sound. Music composed by Vishal Chandrasekhar is haunting. While the Songs topped the charts, Background Score generated the right kind of feel required for a love story. Picturization of the Title Song takes your breath away. Cinematography by JK is an asset. He captured the beauty of Kolkata perfectly and ensured all the sequences were refreshing. No compromises what-so-ever when it comes to production values. Producer Sudhakar Cherukuri deserves a pat on his back for doing everything possible.

Unfortunately, Hanu Raghavapudi failed to utilize the resources he have to the fullest. Although the romantic scenes inspired from Krishna-Rukshmi's Love Story were impressive, Conflict Point isn't strong enough to maintain the same tempo. Screenplay in the Second Half costs dearly. Maintaining more clarity while dealing the post break-up episode could have changed the fate.

Hanu Raghavapudi is admired for the classic touch he offers to the love stories. He has got a unique way of designing the romantic track, at times reminds the good old films of Mani Ratnam. Sadly, This Sensible Filmmaker falters when it comes to gripping narration again & again. That's the drawback of 'Padi Padi Leche Manasu' as well. The Film starts off well, makes the viewers travel with the Lead Pair till the highly-emotional moment with Interval & then collapses all of a sudden.

A conscious attempt was made by Hanu Raghavapudi to narrate a new point with 'Padi Padi Leche Manasu'. Sadly, The way it's been dealt worked against the movie. Expertise of the Director in handling Love Stories makes First Half a perfect treat. Viewers thoroughly enjoy the Kolkata Backdrop, Pairing/Performances of Sharwanand & Sai Pallavi, Soothing Music, Eye-catchy Visuals and Sensible Dialogues. Although there isn't much story in the first one hour, Lead Pair & Technical Brilliance entertains completely.

'Padi Padi Leche Manasu' loses track after the revelation of the conflict point. All of a sudden Sharwanand starts behaving like a completely different person & the artificiality continues till the end. Logic goes for a toss and many scenes test the patience of the viewers. The way problem of Sai Pallavi has been showcased makes the character a laughing stock. Certain scenes remind us of films such as 'Swayamvaram' and 'Premam'.

Even good performers like Sharwanand and Sai Pallavi haven't be able to do anything here to save the film. Audience could only sympathise watching the sincere efforts put in by them. Illogical Scenes confuse the viewers and the final twist wasn't convincing at all to lift the mood. Lethargic Pace is another major drawback. Overall, Hanu Raghavapudi has successfully ruined the good impression viewers had after watching first half with below-par second half.

Bottom Line: Watch It For First Half!