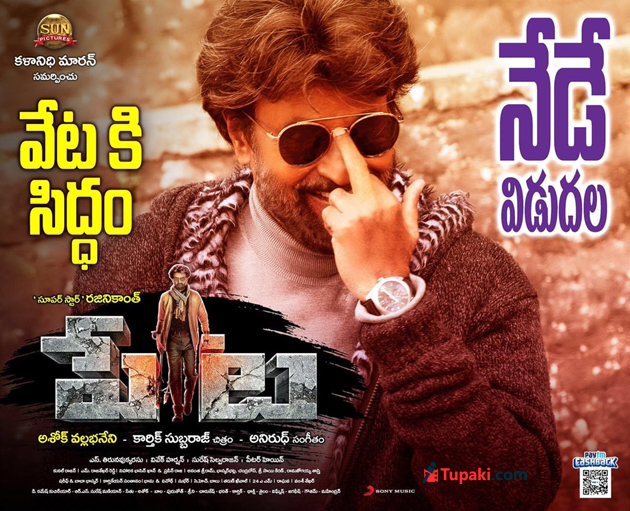 Rajinikanth hasn't tasted success post 'Robo'. 'Lingaa', 'Vikram Simha' and 'Kaala' had bitten dust. While 'Kabali' managed to do well in Tamil Territory, '2.O' met the expectations only in Hindi-speaking States. Overall, Thalaivar failed to deliver a perfect hit since 2010. And now, He arrived with 'Petta'. Can this last attempt offer a much needed boost to Rajinikanth ahead of his political entry?

Kaali (Rajinikanth) gets appointed as a Hostel Warden of a College at a Hill Station. He sets everything right at the Hostel after his entry by settling scores with the Rowdy Gang. Kaali pays special attention on a Student by name Anwar. There is a hidden agenda behind Kaali rescuing Anwar for all sorts of trouble. Who is Kaali? What's the purpose of the Saviour role? Watch 'Petta' to know more details!

Rajinikanth thrills the fans with one of his best looks and terrific screen presence. There are ample moments which enthrall his Fan Base in the movie. Be it his energy levels or performance, Superstar is simple marvelous.
Nawazuddin Siddique has done pretty well but the role he did wasn't up to his stature. This Acclaimed Actor, however, leaves a mark of his own in the sequence where he goes on a killing spree.

Vijay Sethupathi does a nice job but he too deserves a much better role. Even Bobby Simha was under-utilized. Neither Simran nor Trisha have nothing much to do. Of course, Simran looks beautiful after getting into shape again. Sasikumar is alright.

Nothing much for Regular Audience

Anirudh Ravichander made the most out of the opportunity to compose music for Rajinikanth Flick for the first time. Songs and Background Score have a huge asset to 'Petta'. Camera Work by Thiru is worth mentioning. Sun Pictures maintained good production values. Lack of crisp Editing is a setback. Director Karthik Subbaraj of 'Pizza' fame disappoints. As a Fan, He succeeded in offering a youthful look to Rajinikanth but failed to thrill the viewers with either story or screenplay. Stylish Taking & Few Moments which could enthrall Rajini Fans won't be enough to deliver a hit. This movie isn't for those who look forward to fresh content!

Movie Lovers wonder what made Rajinikanth accept such an outdated story while watching 'Petta'. Not only fans, Everyone expected the combination of Rajinikanth & Karthik Subbaraj to be sensational. Nobody ever anticipated even in their wildest dreams that 'Petta' will be a routine commercial flick after watching films such as 'Pizza' and 'Jigarthanda'. At one stage, Viewers get restless with the same old hero-elevation sequences.

During the audio launch of 'Petta', Karthik Subbaraj told - 'The Film is inspired by, performed by and dedicated to Rajinikanth'. The idea of the Director is to present vintage Rajini-mark style and mannerisms (80s, 90s) on the screen. Karthik showed how he wishes to see Rajinikanth as a Fan. Had if he blended a unique concept with the stylish presentation and hero-elevation scenes, Impact could have been at a different level. At least, Karthik Subbaraj should have kept the movie buffs who admired his previous films in mind while working with Thalaivar. Style over Substance...That's a statement which suits 'Petta' to the T.

The same old Revenge Deama has been presented in a stylish manner by Karthik Subbaraj. Compared to his previous movies, Rajinikanth appears so young and much more energetic. You can't find  Karthik Subbaraj-mark surprise elements in the movie. First Half of 'Petta' entertains to some extent. Thanks to Rajini-mark style statements and mannerisms! People expect the flashback to be either so intriguing or powerful by the end of Interval Block. Sadly, A routine flashback has been served. Viewers keep on questioning themselves what made good performers like Nawazuddin, Vijay Sethupathi and Bobby Simha sign the project. Even the female leads have nothing much to do for leaving a mark of their own.

Few Sequences in 'Petta have come out well with Karthik Subbaraj's Taking, Anirudh's Background Score and Thiru's Cinematography. Lack of any big surprises is a major drawback in the movie. Climax Twist is fine but its not on par with the impact created by 'Pizza' or 'Jigarthanda'. Watch 'Petta' only for Rajini-mark Moments!