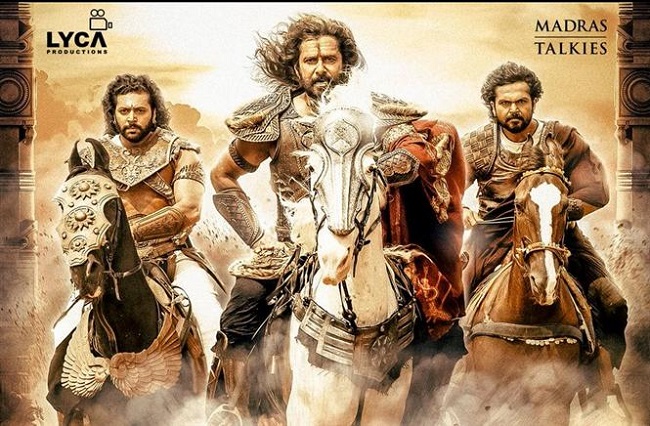 Legendary filmmaker Mani Ratnam's dream project 'Ponniyin Selvan' has finally arrived on the big screens. Based on the popular novel of the same name written by Kalki Krishnamurthy, this two-part story depicts the rule of the Chola kingdom. The first part hit the screens today and the film's unit frequently said that 'Ponniyin Selvan' is a unique film that shouldn't be compared to the likes of either 'Baahubali' or 'Game of Thrones'. The trailer generated a lot of hype and with a lot of big names involved, the expectations are quite high on this project. Let us dive into the review straightaway to find out how the film turned out.

Sundarachola (Prakash Raj) who rules the Chola kingdom has two songs namely Aditya Karikala (Vikram) and Arunmozhi Varma (Jayam Ravi). In order to expand their kingdom, both the princes go in two directions and start conquering kingdoms. In the meanwhile, Pedda Palvetta Rayudu (Sarath Kumar) heads a revolt of the Chola dynasty and gets all the vassal kings together. Predicting this revolt, Aditya Karikalan sends his friend Vallavaraya Vandidevan (Karthi) to find out their plans. While returning back after getting the required information, a series of events take place which force Arunmozhi to start fighting against his own father. At the same time, the Pandyas try to kill Arunmozhi in order to restore their lost kingdoms. How did Arunmozhi survive these threats? What did Vallavaraya do to protect him? Did the revolt against the Chola emperor become successful? All these questions will be answered on the big screens.

Whether it is history or fictional films, 'Baahubali' has changed the mindsets of Indian film viewers. Such genres in India should be referred as before 'Baahubali' and after 'Baahubali'. Prior to Rajamouli's film, films based on kings and kingdoms are treated differently by filmmakers as well as the audience. People used to be satisfied with grand sets, stunning camera work and one big war episode. If the story and screenplay are engaging enough, the film would become a super hit. But Rajamouli changed everything. He came up with production design that was never seen before and showcased some epic war sequences to the Indian audience along with his trademark elevations for lead actors. Despite defying gravity and logic in many places, the 'High' feeling Rajamouli's films give is something else. After stunning the Telugu audience with 'Magadheera', he shook the whole nation with 'Baahubali'. This changed the standards of moviegoers. Some might not like Rajamouli's films and accuse him of getting inspired by Hollywood films. But he knows how to deliver a well-packaged film with a lot of entertaining moments that are worth every single penny. Due to this, any big-budget movie coming from history or fantasy genres are compared with 'Baahubali' and they are falling flat. 'Ponniyin Selvan' is the latest addition to this list. Despite watching with an open mind, this dream project of Mani Ratnam definitely disappoints you even with or without comparing it with 'Baahubali'.

Karthi is not the hero in 'Ponniyin Selvan'. The heroes are Vikram and Jayam Ravi. The 'Awara' actor did a supporting role named 'Vallavaraya Vandidevan'. In such a big film, we expect huge hero introduction scenes and people want to connect with the main characters. We expect elevation scenes too but Vikram and Jayam Ravi's characters neither gives you energy nor excitement. The audience fail to connect with these roles and their roles will not be seen throughout the film. While Vikram makes his presence felt, Jayam Ravi's character gets introduced with a bland fight sequence and goes in the same tempo throughout. While both these roles fail to impress the audience, it is Karthi who manages to rescue the film to an extent. With big elevation scenes and action sequences not present in the movie, it is Karthi's entertainment that provides relief for the audience. His flirting with women and jokes work out well and it explains the situation of 'Ponniyin Selvan'.

As it is known, 'Ponniyin Selvan' is a film based on a great novel of the same name. It is the best-selling novel in Tamil even today and people who read it sing laurels about it. But this sense of excitement cannot be felt at any point in the film which explains how Mani Ratnam and his group of writers failed to adapt the novel into a compelling movie. While it is true that Mani Ratnam and his team did a lot of hard work, they did not create a single scene that gives you goosebumps. People who read the novel might travel with the audience right from the start but the people who are only watching the film will not be able to connect with the characters instantly. Turning the five-part novel into a two-part movie is a tough task and it feels like the makers started the film from the middle as characters are explained through dialogues and not visuals. The lack of connectivity with the main characters except for Karthi's role is one of the biggest drawbacks of this film.

It is unable to explain the story of 'PS – 1' even after watching the entire film. Mani Ratnam's storytelling is quite confusing. While the plot can be outlined as the vassals revolting against the Chola kingdom and their sons trying to protect it but there is a lack of clarity in the screenplay. Mani Ratnam is known for not spoon-feeding the audience right from the beginning of his career but the magic of his earlier films went missing in his recent outings. The same happened with 'Ponniyin Selvan' too. The film looks like a collection of scenes with no link inbetween them. It is the same with the characters too. While Karthi's fun scenes make the first half passable, the second half tests your patience and makes you feel bored. Most of the crucial points are just touched upon by Mani Ratnam and he never went deep down and explored the characters. Though it would have made the runtime bigger, the detailing would have helped the audience to understand the characters even more. With the last 30 minutes gaining speed and a huge action sequence taking place, the audience gets invested at the end. They end the movie halfway and announce part two but we need to see how many people are interested to see the second part, especially after a not-so-engaging first half. 'Ponniyin Selvan' may excite the Tamil movie lovers due to its nativity and historic connection but people from other regions may fail to embrace it in the same way.

While Vikram is the first in the list when it comes to big names, his character is not that interesting. His look and screen presence is quite impactful and he makes a mark within the limited time he was given but his role is not quite memorable. The same is the case with Jayam Ravi who tries to do his best within the space he got. The only character in the movie who stands out and steals the show is definitely Karthi's. His natural comedy timing and ease made the character everyone's favorite. He lights up the screen with his presence every time. He did complete justice to the role given to him.

Aishwarya Rai Bachchan impresses as scheming Nandini. She showcased a lot of maturity in such a vicious role. But the hype given to her character before the introduction goes in vain as her character does not get the required elevation. Trisha is decent in her role while Prakash Raj and Kishore did very well. Jayaram surprises with his unique look and acting performance. A lot of familiar faces were taken for even small roles but they justified their roles.

'Ponniyin Selvan' is top-notch in terms of technical quality. There is intentionally not many graphics in this film and the cinematography by Ravi Varman stands out. There is nothing jaw-dropping but the visuals look great.  Music by AR Rahman is fantastic. The grandeur can be felt through his music but there are not many scenes that give room to showcase his specialty. While his BGMs elevated a lot of scenes, the songs have a lot of Tamil flavor which is expected as it is a movie made on Tamilian history.

The production values are terrific but Mani Ratnam fails to make full use of all the talent available to him. His specialty can be seen in a few scenes and dialogues but he fails to present this popular novel in the best way possible. His mark magic went missing in most parts of the movie.