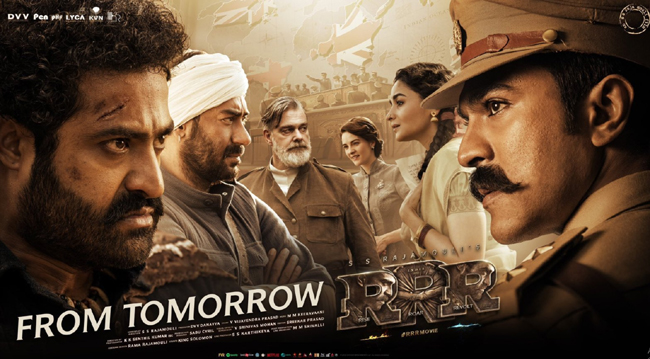 The day every film lover has been waiting for is finally here. India's top director SS Rajamouli's magnum opus 'RRR' featuring NTR and Ram Charan in the lead has finally hit the screens today. There are high expectations on this massive film made on a budget of over 400 crores. With a lot of noted actors and top-notch technicians, 'RRR' has a lot riding on it. Let us dive into the review straight away to find out whether Rajamouli showed his magic once again or not.

Prior to the Independence, British officer Scott and his wife who rule from Delhi visit Adilabad once. They take away a young kid named Malli who belongs to the Gond community. Bheem (NTR) reaches Delhi in disguise and starts his search for Malli.

On the other hand, Ram (Charan) joins the British police force with a strong purpose and aim. The British officials appoint Ram as the man in charge to arrest Bheem. Ram and Bheem become close friends within a short time as the latter hides his real identity. Bheem devises a plan to free Malli but Ram stops him as a police officer.

This leads to a rivalry between the two friends. Will Malli become free? Where does the rivalry lead? The answers to these questions form the rest of the story.

Alluri Seetha Ramaraju and Komaram Bheem are two iconic freedom fighters in our history. Their stories are in no way connected and they never fought together. It is a fictional idea to bring these two personalities together. The situation is completely different for 'Baahubali' as it is complete fiction and the audience watch it with a separate frame of mind. But taking two real-life characters and making a fictional story with them has high chances of backfiring. Despite all their heroics, the audience may not get connected to the happening on the screen due to the actual history. But convincing the viewer with such a fictional and artificial script by taking them into a whole new world and mesmerizing them is a task that can only be achieved by Rajamouli.

Despite knowing that nothing is real, Rajamouli's typical visual grandeur, the magic weaves on the screen with his direction, the terrific hero elevations, the jaw-dropping action sequences and the stupendous performances of both the star heroes made 'RRR' worth the watch. This film may fall short in terms of story and emotions when compared to 'Baahubali' but it definitely entertains the audience completely and satisfies their expectations.

There are different types of audiences who like different kinds of cinema. Making a film that caters to the majority of the audience is the most difficult task. SS Rajamouli is the expert when it comes to dealing such films and he has mastered the art over the years. He arranged a press meet right at the beginning of the shoot and readied the audience for what he is about to present in the film. If you enter the theatres expecting what Rajamouli decided to show, he will surely impress you heavily. His elevation shots know no bounds when he has one mass hero. Imagine what happens on the screen when he has two star heroes like Ram Charan and NTR.

Rajamouli let his imagination go wild and crated some wonderful scenes throughout the movie. Whether it is the stupendous introduction scenes or the awesome first meeting between the two heroes or the fierce interval fight sequence or the high energy 'Naatu Naatu' song or the emotionally touching 'Komuram Bheemudo' song or the ultimate destruction in the climax sequences, Rajamouli's magic, and grandeur are at full display.

Irrespective of the humongous expectations, Rajamouli surpasses everyone's expectations and gives a whole new experience to the audience. There are a lot of examples to showcase how big he thinks. Bheem's plan to bring out Mallu from a British fort filled with hundreds of officers is simply astonishing. This one sequence is enough to do justice for the high ticket prices. Despite thinking about all this destruction for a small girl, we are left with no option but to be in awe of what is happening on the screen. The way Charan and NTR fight during the interval scene like two angry lions is just extraordinary. The way they find together towards the end has redefined 'Mass' in every possible way. They literally set the screens on fire during this episode.

Since it is Rajamouli's immediate film after 'Baahubali', it is quite natural to draw comparisons. Since the Prabhas and Rana starrer is a completely fictional film, Rajamouli had no bounds when it comes to imagination. With the help of visual effects, he took us into a whole new world. But it is different with 'RRR' as he tried to present the film in a grand way in the middle of many restrictions. This grandeur can be seen mainly in action sequences and they are just mind-blowing. Since it has an Independence backdrop, the audience will feel a lot of emotion if the story is real but since 'RRR' doesn't have a real story, the emotions did not work well as expected. This was the only notable negative aspect of 'RRR'. Despite the story, Rajamouli mark screenplay made sure that the audience do not get bored despite the lengthy runtime. Compared to the first half, the second half is a bit slow. But the last 30 minutes make the audience glued to the screens and take the film to a whole new level. Despite the shortage of emotions, Rajamouli mark magic makes the film look wonderful. 'RRR' is a feast not just for NTR and Tarak fans but for any movie lover.

The performances of NTR and Charan should not be compared. They did a great job in the roles given to them. Fans of both the heroes will be proud while watching this film. Going by the character, Ram Charan's role has more elevations. It has a lot of shades and carries a greater purpose. It is a complex character where he has to hide his emotions and go through a lot of inner conflict. Ram Charan did a brilliant job and gives a matured performance.

NTR looked perfect for Bheem's role where he is required to look innocent and fierce when needed. There is no other actor who can deliver such a phenomenal performance and his range of emotions are at full display. His acting around the whole 'Komuram Bheemudo' song shows the caliber of NTR. Both the heroes did their best in the action sequences and carried the emotion throughout those scenes.

Despite NTR and Charan dominating the entire film, the other actors did great too. Alia leaves her mark in the small role she has been given. Olivia Morris gave a good performance and looked beautiful onscreen. Ajay Devgn leaves a strong impact within the limited screen time he got. The actor who did Scott's role was tremendous while Shriya did not have a lot of scope to perform in 'RRR'. Rahul Ramakrishna and Samuthirakani are perfect in their respective roles.

There are a lot of heroes behind the screen for 'RRR'. The most important person to talk about is MM Keeravani. The background score given by him was fantastic and helped the film a lot. It is better to experience it rather than explaining it. The songs are good as 'Naatu Naatu' is a festival for the masses while 'Komuram Bheemudo' stands out. Senthil Kumar is brilliant once again with his camera work. The top-notch DOP proves once again that he is the best in business when it comes to filming visual extravaganzas. Production designer Sabu Cyril is phenomenal as his work will leave you speechless in many places. The costumes are great too. DVV Danayya did not compromise at any point and the production values are very high.

Vijayendra Prasad prepared the 'RRR' story under a lot of limitations. He tried his best but the lack of naturalness in the script makes some scenes tougher to connect. Dialogues by Sai Madhav Burra are great. Rajamouli's direction is just flawless. He is in his own league when it comes to presenting scenes in the best way possible whether it is action or emotion. He has set the standards so high for himself with 'Baahubali' and easily crosses them with his work in 'RRR'. Despite some minor hiccups in emotional sequences, Rajamouli delivered big time once again with 'RRR'.

Verdict: A Feast To The Eyes But Not The Heart!