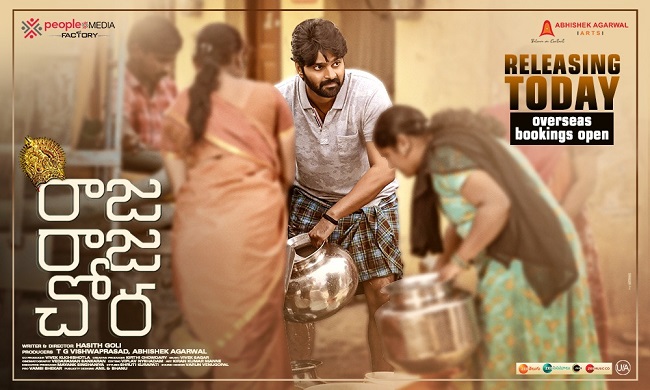 Of all the young heroes in Tollywood, Sree Vishnu is the one who is making a mark for himself with different concepts and movies. 'Mental Madhilo' 'Appatlo Okkkadundevaadu', 'Needi Naadi Oke Katha' and others stand as an example for his unique choice in films. Now, he came with 'Raja Raja Chora' which is another interesting film. The trailer raised a lot of expectations on the film and let us dive into the review to know more.

Bhaskar (Sree Vishnu) is a middleclass man with big dreams. He works in a Xerox shop and leads life mediocrely with his wife Vidya and a kid. But he hides the fact that he is married and pursues a relationship with Sanjana (Megha Akash). He lies that he is a software engineer and does small time robberies to compensate for the costly lifestyle. At one time, Sanjana finds out that Bhaskar is married but covers it somehow. He decides to leave his family and settle with Sanjana by doing a big robbery. This lands him in a lot of troubles and strange situations. How his life turned out forms the rest of the story.

People usually believe that a new director will offer something different but having that kind of belief on a hero who doesn't have any background is really a big thing. Sree Vishnu garnered that kind of image right from the very beginning of his career. Looking at the promos of 'Raja Raja Chora', one can sense that it is a fresh film with unique taking. On top of that, Sree Vishnu guaranteed that the film is going to be a laugh riot and gave a lot of elevations which increased the expectations. But 'Raja Raja Chora' doesn't disappoint you and offers you everything that you expect from a Sree Vishnu movie. The film has good emotions, entertainment and fresh narration but not to the level of what Sree Vishnu said. Though there is nothing new in terms of story, the narration is quite different from the regular commercial movies. There are no regular scenes that we see in a regular movie. Simple and entertaining screenplay is the biggest plus of 'Raja Raja Chora'. The characterisation of the hero who pretends to be a software employee despite being a married man and a guy working in a Xerox shop works big time. The way he learns English from kids and uses them in front of his girlfriend is quite hilarious and people get curious to find out how long he carries on like this. With small twists and turns, director Hasith Goli runs the first half smoothly and brilliantly. The pre-interval twist is the biggest highlight of the movie and the scenes before the interval brings the house down. It takes the film to another level and sets us up for a perfect second half.

The makers indicate that the film takes a serious turn post-interval and that is what happened here. Hero realises his mistake and tries to get his life back on track which makes for some emotional scenes and there are no big twists in the second half which brings the tempo down by a notch. The combination scene between Sree Vishnu, Megha Akash and Ravi Babu is the only hilarious part in the entire second half. While the emotional scenes are good, they do not move you and there are no heavy turns or highs towards the end of this movie. Despite falling flat in the second half, 'Raja Raja Chora' engages you. Top-class performances, technical quality and adequate entertainment proved to be its biggest strengths. You can enjoy the move thoroughly this weekend if you keep your expectations under check.

Sree Vishnu should be appreciated for his choice of films irrespective of the results. He stays away from routine movies and 'Raja Raja Chora' is his best work till date. His typical comedy timing entertains the audience big time. He excels in the emotional episodes too. Sunaina impresses with her performance and did quite naturally. Megha Akash looked cute and delivered a decent performance. Ravi Babu entertained in his typical style after a long time. Gangavva steals the show in her brief role and the rest of actors including Tanikella Bharani, Kadambari Kiran and others did quite well.

Vivek Sagar showcased his versatility once again with 'Raja Raja Chora'. His background scores elevated a lot of scenes and brought freshness to the movie. He even gave some good songs which suited the movie's flow. Director narrated the story through songs as well which should be commended. Writer and director Hasith Goli did a marvellous job on his debut. He made his mark and handled the film with a lot of maturity and finesse. He proved that he has a lot to offer in the coming days. He should have taken more care in the second half but it can be excused due to the heavy dose of entertainment.

Verdict: This 'Chora' Steals Your Heart!