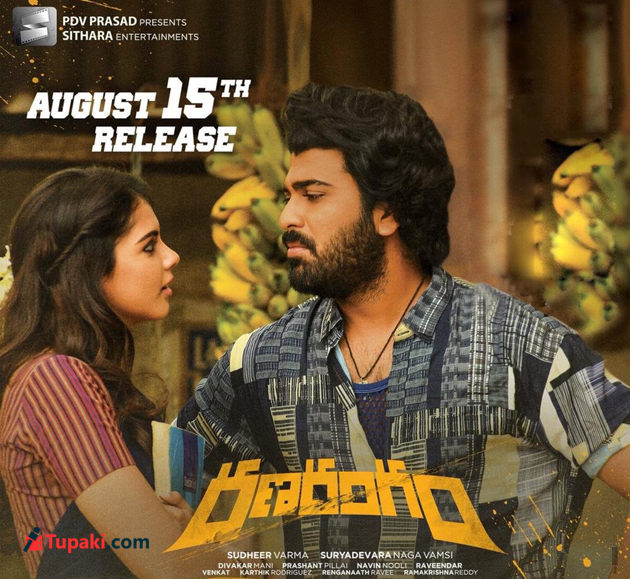 Sharwanand has always been keen to take up interesting subjects. When a hero of his reputation teams with Sudheer Varma of 'Swamy Ra Ra' and 'Keshava' fame, Movie Buffs expect something special in such combination. Promos and Sound Track of 'Ranarangam' built the positive buzz. What more this Independence Day release will be offering?

Deva (Sharwanand), an orphan, gets into Illegal Liquor Business when prohibition was implemented in AP in the 90s. That is when he enters into the bad books of local MLA (Murli Sharma) who is operating the same illegal business. How Deva fought against all the odds to grow big forms rest of the tale!

Sharwanand is an actor who never disappoints irrespective of the story and screenplay. Yet again, He delivered a sincere performance while presenting the transformation from hot-blooded Youngster to powerful Don. Sharwa is simply superb, be it his screen presence or performance in emotional scenes.

Among the two heroines, Kalyani Priyadarshan shines. She looks so beautiful in the traditional get-up and made her character look lovable. Kajal Agarwal, on the other hand, failed to leave a strong impact. Murli Sharma as MLA appears to be a misfit. Punches of Comedian Sudarshan tickle the funny bone. Brahmaji and Ajay did a fine job. Adarsh Balakrishna and Raja Sirivennela are alright.

Lack Of Importance for Kajal

Technicians delivered the best output they can for 'Ranarangam'. Background Score composed by Prashant Pillai is a major highlight. Marriage Song is the best in the album. Cinematography by Divakar Mani arrests your attention. Art Director is simply superb. Sithara Entertainments never compromises on Production Values. Dialogues penned by Arjun-Karthik are worthy of mentioning. Hero who is an Orphan tells Heroine, 'Ninnu Pencharu...Nenu Periga'. One-Liners might appear simple but they have a lot of depth. Apart from extracting the best from Actors and Technicians, Sudheer Varma showed his mark with stylish taking. He, however, disappointed completely when it comes to story. Wonders can be created if someone as talented as him chooses the right subject.

In a sequence of 'Ranarangam', Protagonist decides to settle scores with Local MLA who kept troubling him by looting his liquor stock from Goods Train. Visuals look splendid and Background Score is marvelous in this scene. By the end of it, Viewers end up feeling why so much of build-up was given when Director couldn't deliver something special from his end. Taking is exceptional but lack of freshness or thrill factor makes the scenes look ineffective. Viewers end up having the same feeling throughout the course of a movie & that's the sad part.

Sudheer Varma claimed 'Godfather' inspired him to make 'Ranarangam'. Plenty of Indians Films has been made in the past few decades taking inspiration from the Hollywood Classic. In what way, 'Ranarangam' is different from them matters the most. This is where Sudheer Varma failed to impress.

Choosing 90s Backdrop made 'Ranarangam' look different on the screen. Thanks to the expertise of Cinematographer & Art Director! Sudheer Varma did succeeded in presenting the Actors so well. Background Score is terrific throughout. Even the Dialogues and Narration were good enough to make the proceedings look fine. On the flip side, You don't get to see anything new in the journey of a Youth from an Orphan to Don. This is why Viewers find the movie disinteresting after a point!

Parallel Narratives of Present and Flashback isn't considered as a new screenplay anymore. While the Flashback is passable due to the chemistry of lead pair and backdrop, Scenes depicting the Present doesn't excite at all. You don't get to see any twists n turns until the last 10 minutes. What happens if a Youth goes against an MLA? What will be the consequences of marrying a Traditional Girl against the wishes of her family? What are the problems faced by a Don from Enemies? In all these aspects, 'Ranarangam' is no different from several gangster flicks released in the past.

Lack of freshness in Story & Screenplay is the biggest flaw in 'Ranarangam'. Watch it only for Good Performances, Stylish Taking and Technical Brilliance.