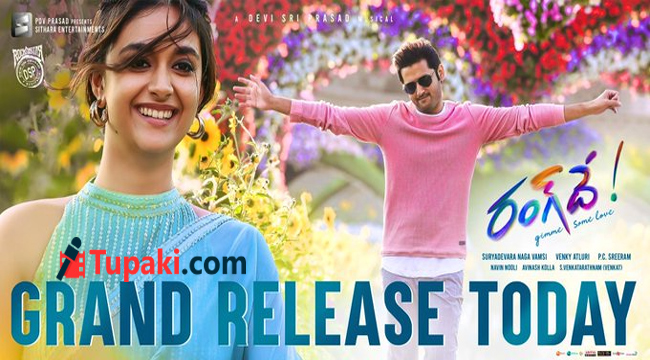 After a disappointing 'Check', youth star Nithiin is back within a month with a romantic-comedy like 'Rang De'. Keerthy Suresh is the female lead in this flick while Venky Atluri directed it. The teasers and songs created a huge buzz on the film and let us dive directly into the review to find more about 'Rang De'.

Arjun (Nithiin) and Anu (Keerthy) are neighbors since childhood. Arjun hates Anu right from the beginning as she causes him trouble in every aspect of his life. But Anu likes Arjun a lot. Due to some unavoidable circumstances, they both get married and Anu starts to torture Arjun which creates a lot of distance between them. What happens after that and how they end up together by falling in love forms the rest of the story.

A girl falling for a boy who doesn't reciprocate the same feelings at the beginning but finally the couple ending up together is not a new story. It has been used numerous times before in various languages. But there won't be new love stories. It all depends on how well the writer or director designs the characters and narrates the regular story in a manner that connects to the audience.

Thankfully, 'Rang De' manages to do that as it has two lead actors who performed well and showed a lot of chemistry between them. Despite having a lot of normal and expected scenes, the film manages to keep you engaged. On top of it, the film is backed by strong technicians who gave their best. The film is high on entertainment and has decent emotions which are its biggest advantages. You won't be disappointed with 'Rang De' if you keep your expectations in check.

The first half moves at a brisk pace with short runtime and hilarious scenes between the hero and the heroine. Apart from them, comedians Vennela Kishore, Brahmaji, Abhinav and others helped the proceedings with their perfect comedy timing. Despite the setup being routine, the pleasant feel and feel-good narration by Venky Atluri makes it worth a watch. The first half comes to an end with a small twist which brings a bit of curiosity,

The film falls a bit flat on the second half as the entertainment value comes down a lot and the serious scenes fail to bring the emotional connectivity. The audience can predict what happens next and it brings down the experience. There are no standout moments in the latter part which is also a major letdown. But the light-hearted screenplay doesn't bore the audience. On the whole, the film is a time pass entertainer without any highs or lows. It manages to keep you engaged throughout thanks to some good performances from the lead cast and brilliant work from the technicians.

Nithiin excelled in this role as he looks quite stylish. He is apt for this character and brings out his best in the comedy portions. He shared great chemistry with Keerthy Suresh too. Naresh did a good job as hero's father and does well in both comedy and emotional scenes. Rohini impresses the audience as usual. Vennela Kishore brings the house down with his comedy and Brahmaji too leaves you in splits. Suhaas and Abhinav too did a decent job as hero's friends.

It was Keerthy Suresh who dominated the entire proceedings. Though her looks were a bit concerning at times, you can spot a mistake in her performance. She did exceptionally well and the director provided her with a lot of scenes to showcase her acting abilities. She is one of the biggest plus points of this film.

Being a love story, Devi Sri Prasad once again proved his mettle. He gave wonderful songs which suited well for this film. Whether it is energetic songs or romantic songs, DSP's music is sure to work in favor of this film. His background scores are equally good and elevate the proceedings. Ace cinematographer PC Sreeram showed us why he is the best in business. His visuals are simply stunning and he gave us a visual feast. Apart from the colorful visuals, his work during the emotional scenes helped the narration a lot. Production values by Sitara Entertainments are top-notch while editing is decent too.

Coming to Venky Atluri, he comes out with pass marks this time. He kept things simple and never tried to go overboard which worked perfectly. He made sure that the entertainment levels are high and the chemistry between the lead pair works well. Had he taken care of the second half and especially some emotional scenes, they would've enhanced the film further.

Ratings: 2.75/5
Disclaimer : This Review is An Opinion of One Person. Please Do Not Judge The Movie Based On This Review And Watch Movie in Theatre